Marko: We must continue working hard to keep it up 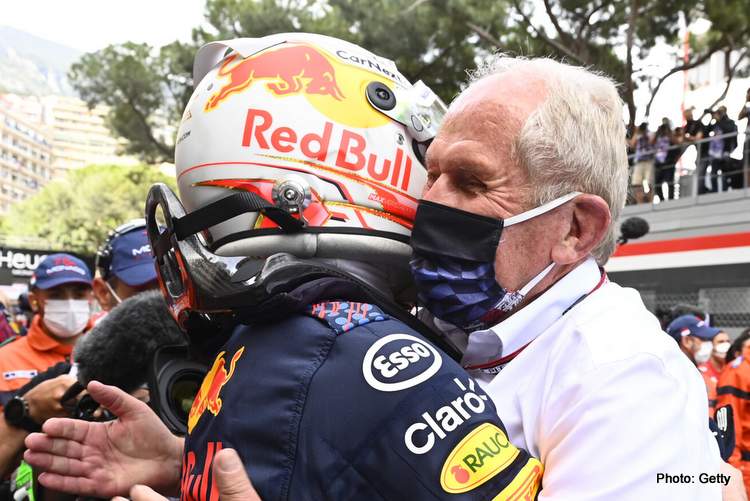 Red Bull consultant Helmut Marko was over the moon after Max Verstappen’s commanding victory at the Monaco Grand Prix on Sunday and has rallied his troops by calling for more of the same in upcoming races.

Not only did the result mean that Red Bull and Verstappen top both the championship standings, heading to Round 6 in Baku, it was also a superb team effort on a day in which Mercedes imploded.

Perhaps the only downside for the Blues was Sergio Perez’s poor qualifying on Saturday, which saw the Mexican line-up eighth on the grid.

However, the veteran did what he does best by delivering a strong and long first stint, his crew then blitzed the pitstop and the #11 Red Bull ended the race in fourth. Damage limitation maximised.

But it was Verstappen that stole the show from the moment he angled the Red Bull to the apex of Turn 1 on the grid, before powering into the first turn leading for what was a lights to flag victory for the Dutch driver.

Marko was delighted when interviewed by ServusTV after the race in Monte-Carlo: “Super, super. It was a nerve-wracking race because it went on and on, 78 laps long and it didn’t seem to want to end!

“We were in front and in control of everything, the tyres, the fuel. I am sure you can already hear the [Mercedes] alarm bells ringing here and there.

“It was also a great race, especially Perez, who drove superbly. That made it harder for Mercedes. And Gasly too. Keeping Hamilton behind him for the entire race is also a very, very good performance. I was surprised Hamilton followed without much of a fight

“We didn’t really have any issues. we knew exactly about the tyre situation was with Bottas and Sainz. We played through all the possibilities. This is what we were aiming for. Now, we must continue working hard to keep it up.

“We lead both championships, so it couldn’t have gone better,” added Marko.

Verstappen heads to the Azerbaijan Grand Prix with a four-point lead over Hamilton in the drivers’ championship standings, while Red Bull tops the constructors’ table by a point over Mercedes.

Not much of a lead one could argue, but in the ongoing psychological war between the two top teams of this era, Monaco might well be a crucial turning point of this campaign. Time will tell.

🗣 “I’m super happy to win the #MonacoGP 🇲🇨 It’s such a tricky track and you need a smooth weekend so I’m very pleased with what we have achieved as a Team and of course with Honda.” @Max33Verstappen on his win 🏆👉 https://t.co/fuV9pd5JiL pic.twitter.com/YAPI6lcikV