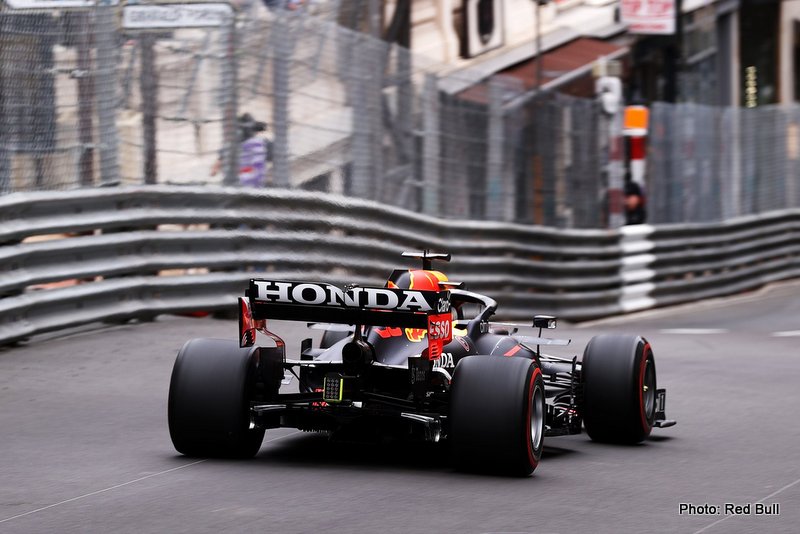 In an up and down session, it was Verstappen who finally came out on top, although on this evidence, there is little between the top teams heading into qualifying.

Mercedes endured a difficult session, with Valtteri Bottas fourth and Lewis Hamilton seventh, and will need to find some improvement between now and the start of Q1.

With the threat of rain in the air at the start of the session, Ferrari were first to brave the slightly cooler conditions – Leclerc holding the edge over Sainz by around a tenth early on with a best lap time of 1:11.658.

Verstappen was next to set a quick time of the softs, separating the red cars with a 1.11.769 to go second.

Mercedes waited until the 20 mark before unleashing their drivers onto the Monaco circuit, with Hamilton holding the early edge over Bottas, but still half a second back from Leclerc.

Verstappen then stormed to the top of the timing sheets with a 1.11.485, with Hamilton slotting in 0.535 seconds back in fourth.

However, the Dutchman’s reign at the top was short-lived, after Sainz put in a 1:11.452 as the drivers began pushing the limits of the classic circuit on the softer rubber.

Leclerc looked set to go quicker before he clipped the barrier, while Hamilton abandoned a lap of his own following a quick first sector.

Sainz extended his advantage with just 20 minutes remaining, setting a 1.11.341, before Nicholas Latifi brought out the red flag after colliding with the wall at the exit of the swimming pool section.

The Williams man took a head on collision and will be lucky to make qualifying on account of the damage.

Red flag as Nicky crashes on the exit of the swimming pool.

A hard hit but good to see him out of the car and ok. We’ll be working flat out to get the car ready for Quali 💪 pic.twitter.com/cO9Bz8GiH0

Cars were back out on track with 12 minutes remaining after the marshals cleared the strewn FW43B, offering the drivers a final chance to finalise their preparations.

Verstappen was first out, but failed to improve on his best time despite a fastest middle sector, while teammate Sergio Perez set his best time of the session to go fourth.

Next time around and Verstappen was able to go quicker, setting a 1:11.294 to move half a tenth clear of Sainz, who could not quite hook up his last sector in order to improve on his own lap.

Mick Schumacher brought the session to an end with two minutes remaining after a significant shunt, leaving Verstappen on top, ahead of the two Ferraris.

Bottas ended up fourth after jumping a few spots late on in the session with Perez fifth.

Lando Norris was sixth for McLaren, just ahead of the championship leader Hamilton, who could only set a best time of 1:12.020.

A busy final practice session… those Bulls and Ferraris are looking quick! 👀

Work to do heading into Quali 👊 Bring it on! pic.twitter.com/GTH3FHrczi

Kimi Raikkonen was eighth, continuing a decent weekend so far for Alfa Romeo, with Pierre Gasly and Sebastian Vettel rounding out the top 10.

Antonio Giovinazzi was just back from teammate Raikkonen in 11th, clear of Lance Stroll and Daniel Ricciardo in 12th and 13th respectively.

Schumacher was 14th, but is unlikely to make qualifying after his shunt, with Fernando Alonso 15th following another disappointing session for Alpine.

Nikita Mazepin was 16th, with George Russell 17th and Latifi 18th – the Canadian also unlikely to make Q1 due to his crash.

Rounding out the field was Yuki Tsunoda and Alonso’s Alpine teammate Esteban Ocon. 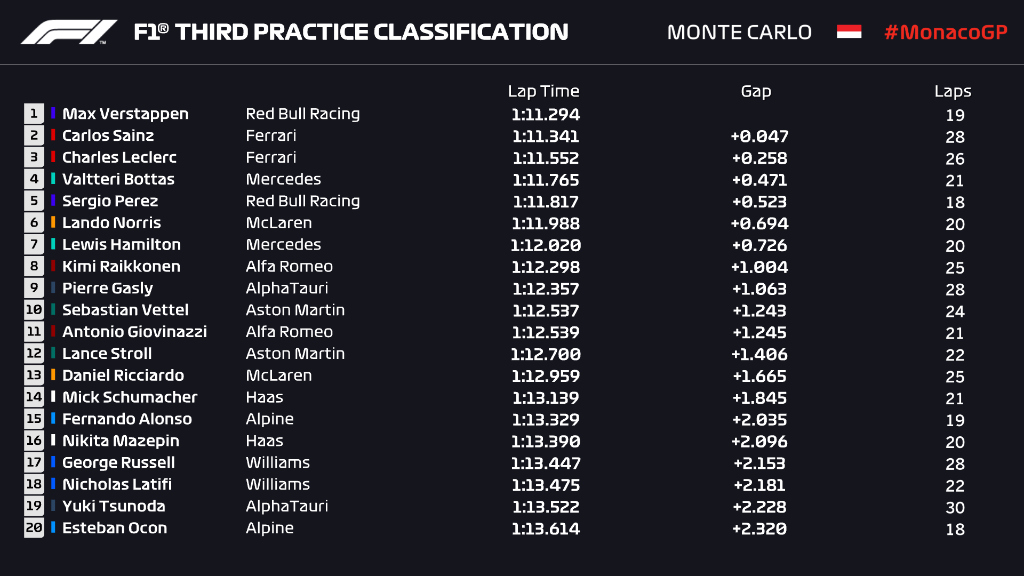