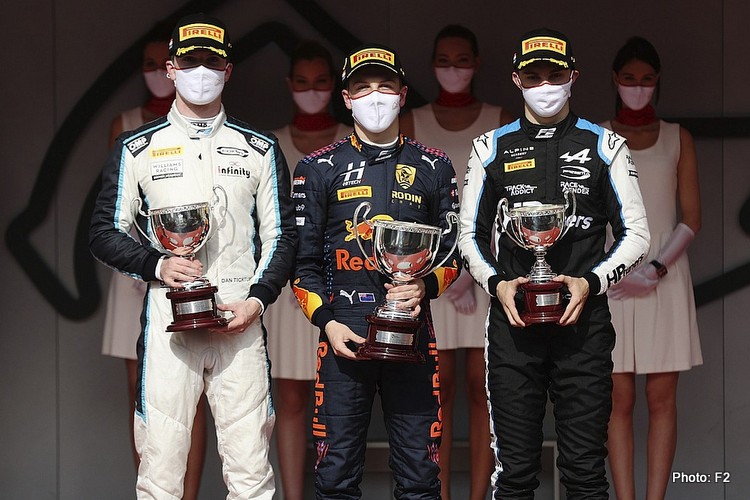 An overnight downpour wasn’t enough to stop Liam Lawson but a technical non-conformity was. Lawson took the flag first in a wet F2 Monaco sprint but was later disqualified, handing the win to Dan Ticktum.

Marcus Armstrong, who was set to start from pole after securing 10th in race one yesterday, was out of the running before he and his Dams even made it to the grid. This meant fellow New Zealander Liam Lawson was promoted to effective pole but Oscar Piastri got the jump off the line to end the first lap leading the field.

Lawson wasn’t going to settle for running in second place as he hounded down Piastri, piling on the pressure to look for a way back through to the lead of the race. That move was to come on lap five with a dive up the inside of Rascasse and the Hitech started to build a gap.

Championship leader Guanyu Zhou had a harsh fall from grace, struggling with the conditions. Both he and teammate Felipe Drugovich pitted onto slicks on lap 11 under virtual safety car for a stranded Marino Sato.

Virtuosi’s roll of the dice did not yield a jackpot return but in fact had the opposite effect. The switch proved to have come way too early and both drivers came in and returned to the wet tyres, but continued to struggle. Zhou and Drugovich were the last of the finishers, both two laps down on winner Lawson.

Dan Ticktum was able to give Lawson something to think about as the Brit had gotten past Piastri to take second place at the exit of the tunnel. Lawson kept his eyes forwards and was able to keep a gap and put in a series of fastest laps as he maintained his composure to win by five seconds at the end, a gap he built in just two laps after a late safety car.

That late safety car saw the race distance truncated by the 45-minute time limit. Brought out by a collision between Bent Viscaal and David Beckmann, Robert Shwartzman took a chance on the slicks but just as his tyres were coming into the window, the chequered flag had been thrown and he would not be able to improve on 11th.

Update: Formula 2 have announced that Liam Lawson has been stripped of his race win and disqualified from Monaco Race 2 for a “technical non-conformity”. Dan Ticktum, who finished second on track, has been declared the race winner.

As a result, Oscar Piastri has been promoted to second and Juri Vips joins the podium in third. Robert Shwartzman earns points for P10 and two bonus points for recording the fastest lap.