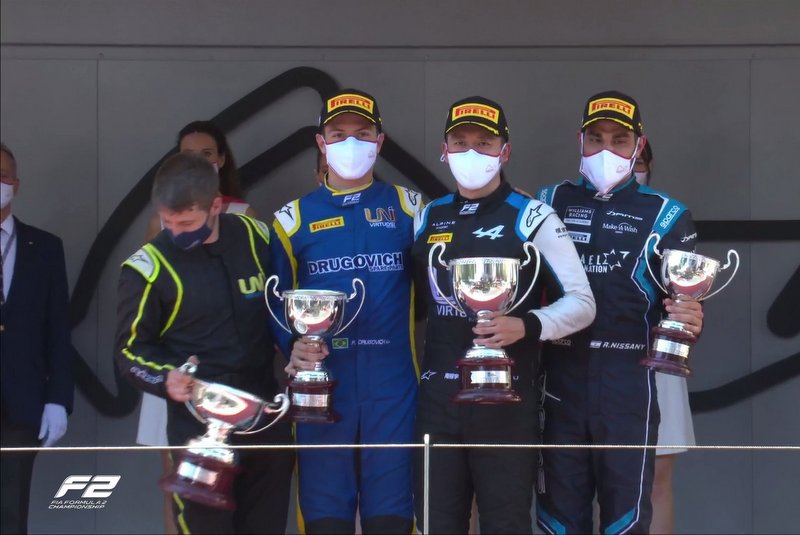 Guanyu Zhou has won the first Formula 2 race of the weekend in a controlled display around Monaco.

Zhou survived a late safety car restart to lead home a UNI-Virtuosi 1-2 in the streets of Monte Carlo.

Guanyu Zhou started the 30-lap affair from pole alongside teammate Felipe Drugovich. A poor start from Drugovich saw Christian Lundgaard capitalise and jump into second-place at Sainte Devote. Robert Shwartzman’s drama in 2021 continued taking significant wing damage on lap 1, dropping down to 22nd and last before retiring his Prema to the pitlane.

The battle between Lundgaard and the UNI-Virtuosi duo of Zhou and Drugovich has become a familiar one already this season with the trio managing to gap the faster qualifiers behind and Zhou dictating the pace of the race comfortably. Lundgaard also possessed good pace early on but in the opening stages of the race, was unable to launch an additional challenge for the lead alongside the continued pressure he was placing on the Chinese driver.

The gap between Zhou and Lundgaard grew to just over three seconds but the reason became apparent when on lap 13, the Dane’s ART Grand Prix car started spewing smoke from the rear as the V6 Mecachrome engine expired before he pulled off the track at Mirabeau, promoting Roy Nissany onto the podium.

With five laps to go, Gianluca Petecof clouted the barriers on the exit of the Swimming Pool section to bring out the virtual safety car which swiftly became a full safety car, erasing Zhou’s eight-second lead.

When the Aston Martin Vantage safety car was withdrawn, Zhou was given three laps to defend his lead. Juri Vips misjudged the restart, losing almost three seconds to fourth place Ralph Boschung who himself was putting pressure on Nissany for the final podium position. Vips, the cork in the bottle, was being hounded by Dan Ticktum in the dying stages but ultimately, the Brit had to settle for fifth as Armstrong stole reverse grid pole for race 2 on the line ahead of Daruvala after a forceful move at Rascasse and Anthony Noghes.

With his third-place finish, Williams junior driver Nissany recorded a first Formula 2 podium in what will be a major confidence boost for the Israeli driver. Drugovich’s second place meant a podium result in his first Monaco outing while Zhou’s win was the perfect way to mark his 50th FIA Formula 2 race.