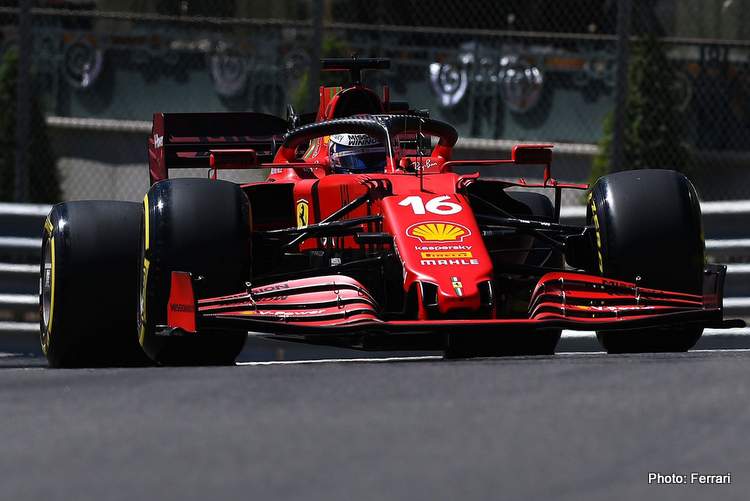 Tifosi will be delighted at the end of the first day of free practice for the Monaco Grand Prix, as Charles Leclerc headed teammate Carlos Sainz for a Ferrari 0ne-two.

The Reds were the only two to dip into the 71-seconds zone, with Leclerc’s FP2 timesheet topping effort of 1.11.684s was a tenth faster than Sainz in the one-hour afternoon session.

It was good news for homeboy Leclerc who in FP1 did one lap around his neighbourhood circuit before a gearbox problem ended his morning shift prematurely. It was a good recovery from the team and their driver.

Sainz kept his teammate honest and is increasingly looking comfortable in the SF21.

Lewis Hamilton who was quickest during the first half of the session ended third quickest in the Mercedes, four-tenths shy of the top time, with title rival Max Verstappen fractionally slower in fourth.

His Red Bull teammate, who was quickest in FP1 earlier, was eighth and a second down on the top time.

Valtteri Bottas was fifth in the Mercedes; half a second separating the top five on the time sheets.

Lando Norris continued to excel and outshine his more experienced Daniel Ricciardo. The young Englishman snaking the beautifully liveried Gulf McLaren to sixth place, six tenths adrift of the top time but nearly full second up on his teammate. The Aussie was visibly ill at ease in his car around Monte Carlo on Thursday.

Next up, in seventh was Alpha Tauri driver Pierre Gasly doing the heavy lifting for the team as rookie Yuki Tsunoda, after an impressive first session at a venue he has only driven on the simulator and in the F1 video game.

But in the afternoon he made contact with the barriers and limited his run to 11 laps, denying himself valuable track time. He was slowest of all.

The Alfa Romeo pair of Antonio Giovinazzi and Kimi Raikkonen seemed good out of the box, with the Italian ninth and the veteran Finn three tenths slower in 11th.

Splitting the Alfas on the timesheets, in tenth, was the Aston Martin of Sebastian Vettel, the four times F1 posting a time faster than teammate Lance Stroll who was only good for 13th.

It’s Monaco, so inevitably there were car-meets-Armco moments on Thursday. Sainz’s Ferrari gave the metal a good clout; as did Haas rookie Mick Schumacher, as did teammate Nikita Mazepin of course; Williams driver Nicholas Latifi; other ‘scrapers’ included veterans Raikkonen and Fernando Alonso.

What to make of day one at the Principality?

Red Bull appear to have the better car, its aero strength suited to the tight twists with Verstappen always in it and Perez showing good pace at a venue where he tends to do well. Mercedes on the other hand have held the cards for the are, when it really matters hence they lead 3-1 in wins after four rounds and will obviously factor.

However. a string Ferrari in the mix sets the stage for one hell of a Grand Prix, where starting in top spot will be paramount for race-winning ambitions hence expect an extraordinary qualifying on Saturday.

For now, its a day break so that the locals can go about their pre-weekend shopping ahead of Saturday when things really get serious in Monaco. 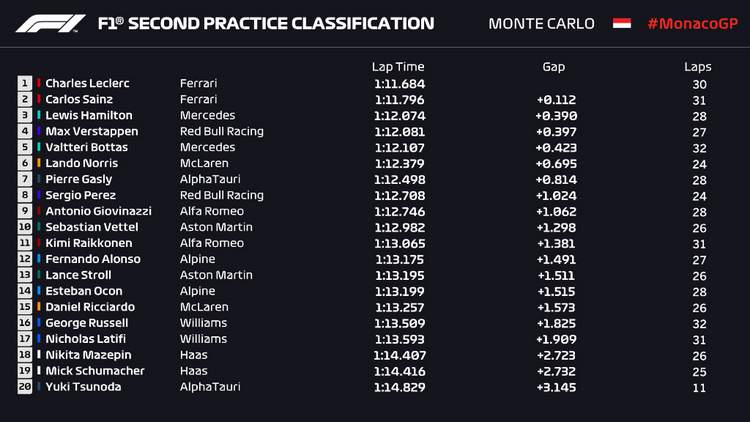