Stateside: Hendrick make history and Grosjean on the podium 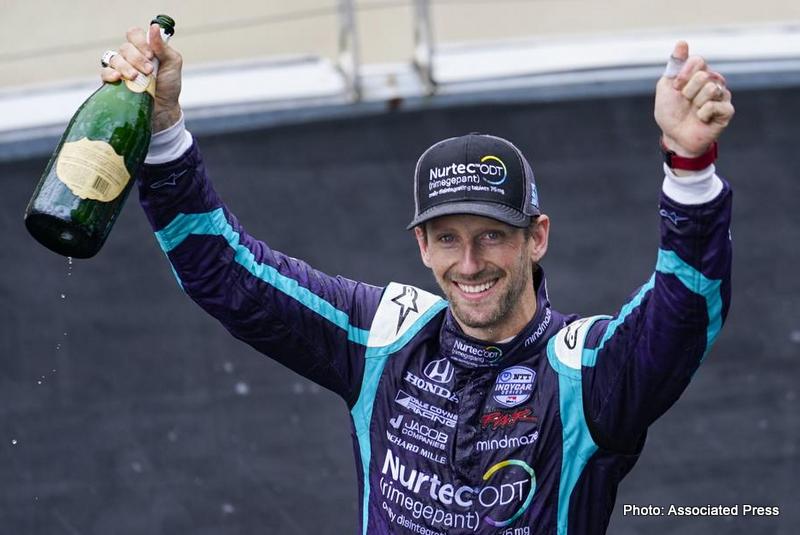 Romain Grosjean made an emphatic statement at the GMR Indianapolis Grand Prix while Rick Hendrick celebrated a historic 1-2-3-4 finish in NASCAR’s visit to Dover.

Grosjean laid down the gauntlet, claiming a first pole position in over a decade when he clocked the fastest time in qualifying for IndyCar’s traditional trip to the Indianapolis Road Course to kickstart the month of May festivities.

Despite leading the majority of the race, the Frenchman had to settle for second as he struggled to cut through lapped traffic, notably Takuma Sato and Sebastien Bourdais.

The 10-time Formula 1 podium sitter’s performance outshone that of Veekay, who already holds a year of IndyCar experience under his belt, while the Ed Carpenter Racing strategy proved to be spot on to assist in the process.

Grosjean showed the world that despite a seemingly lacklustre latter stage in his F1 career, he is by no means a lesser driver, and even after his horror accident in Bahrain, he is still 100% racer.

“Bahrain was horrible but for my life it’s been a great experience and people are really behind me and I can feel it,” Grosjean said. “The support I am having is incredible. You’ve only seen me smiling here in the U.S. and we are happy to be racing here.”

The best part? “Leading races, that’s what I came for,” he said.

Hendrick Motorsports completed a clean sweep in NASCAR as their cars claimed the top four spots at Dover, a third team in history to do so and only the fourth occasion, most recently Roush Fenway Racing at Homestead-Miami in 2005.

Larson controlled the Drydene 400 for much of the race, but when Bowman took the lead off pitlane with 97 laps, he didn’t look back. Bowman held the field off two further restarts before pulling away for a comfortable victory.

“You guys won that race not me,” Bowman shouted emphatically over the team radio.

“We won Richmond and then had a really rough couple of weeks there,” Bowman said. “We went to some really good racetracks for us and struggled. I told the guys last week, ‘We’re still the same team that did it at Richmond.’ This is another really good place for us.

“I’m just so pumped for (sponsor) Ally. It feels right to put the 48 back in Victory Lane here after how many races that this car has won here.”

Hendrick cars led an outstanding 381 out of 400 laps with owner Rick Hendrick seen pacing through pitlane as the laps passed.

“I can guarantee you this is the most nervous I’ve ever been in a race,” Hendrick said. “Great day for the organization. And Alex, congratulations to him. This is a sign of the guys working together and bringing good stuff to the track.

“I don’t think it will hit me until tomorrow that we were able to finish one, two, three, four. That’s pretty hard to do, things can happen, pit stops, tires, anything. That’s a first and we’ll take it. It was a great day for us.”

Acura continued to rule Mid-Ohio with the #10 Wayne Taylor Racing entry overcoming a dominant Mazda to claim a fourth win at the track since 2018 in the two-hour and 40-minute affair.

Ricky Taylor and Filipe Albuquerque pipped the Cadillac of Felipe Nasr and Pipo Derani by just 0.368 seconds at the flag, with the Mazda of Oliver Jarvis and Harry Tincknell having to settle for third.

The only caution of the day dramatically changed the picture of the race, with those such as the #10 who stretched their first fuel stint capitalizing on the timing the yellows flew.

Gar Robinson and Felipe Fraga took the LMP3 won while GTD was won by the BMW M6 of Bill Auberlen and Robby Foley.