Agnes Carlier: Virtual Paddock Club is the place to be 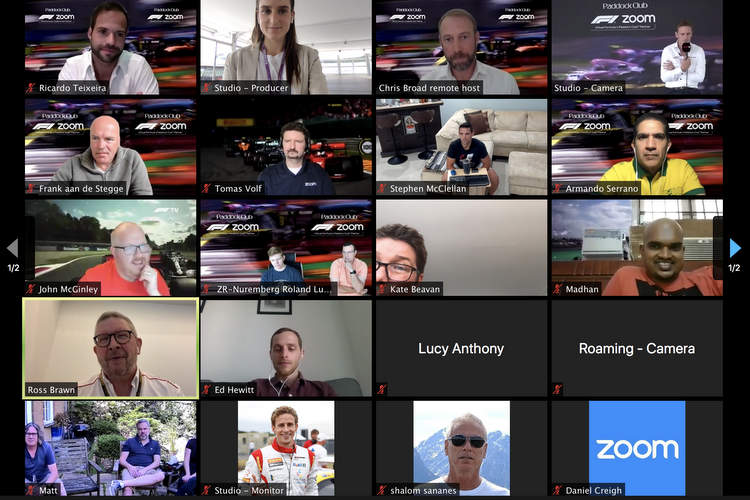 As I was waiting to enter the Formula 1 Zoom call, alone in my personal office, I received a very tempting and unexpected invitation from the director of the Paddock Club.

“Do you have time to join us and spend two days (or two sessions over two days) in the paddock club at the Barcelona F1 Grand Prix along with the guests VIPs,” they asked me.

This of course went straight to my heart as the person inviting me commented: ”Because you are a VIP”….. and I suddenly remembered the real Paddock Club that was above our heads at every Formula 1Grand Prix that awaited atop the garages and pitlane.

Had I known ahead of time, I would have organised myself. I would have made an appointment with the hairdresser and I would have put on my nicest and best attire.

At the given time… I clicked on the zoom link and via the magic of technology, I was welcomed by a charming brunette, Laura Winter – host of the session and her co-host Sam Power.

Immediately after that, I was listening to one of my friend, Sean Kelly who is a passionate specialist of statistics and data in the world of F1. The only person I know in F1 who is able to gather the weirdest statics over a track, an engine or a champion.

I also recognised on the zoom wall of fame, some of the guests which are official F1 sponsors like Heineken, Rolex, DHL etc. They were all firing away in the chatbox with questions to the champions.

In the active session, which also took the guests on a walk through the paddock, I met of course Jean Alesi who contested 201 Grands Prix. When he started his career in racing, I started my career at Marlboro as a press officer.

My employer had organised a challenge called “Marlboro is looking for a driver”, Jean was selected… Also one of the guests of Honor at the paddock club, 1997 world champion Jacques Villeneuve with whom I spent many weekends in Villars-sur-Ollon when Jacques was still driving.

A young 21-year-old talent to be was also present: Juan Manuel Correa. An Ecuadorian-American racing driver who races under an American license and currently competes with ART Grand Prix in FIA Formula 3 was also guest of honour.

Juan Manuel Correa is best known for having been the rookie involved in the terrible Formula 2 accident in which we lost Anthoine Hubert at the Belgian Grand Prix weekend of 2019. Correa suffered severe injuries to his lungs, his spine and his legs in the accident.

He was placed in an induced coma for two weeks, and has undergone a number of surgeries since. He has been recovering at home with his family in Miami, but he felt that it was important to return to racing in Europe with the goal to be racing in F1 in 2023.

“I am struggling to get to the level I was at before the accident,” he admitted. “I am trying to speed up the process as much as possible and at the same time continue with my medical rehabilitation.

“Just because I’m racing again doesn’t mean my legs are perfect. I still have a very big medical challenge,” added Correa, who works with Sergio Perez’s trainer.
I cant wait till tomorrow to “zoom” again…..along with my friend from Zuerich Vanessa Georgoulas who along with Mathias Brunner and Guenther Wiesinger who made Speedweek.ch the leading German language website.

It may only be Virtual, but the Paddock Club remains the place to be during a Grand Prix weekend.
(Note: Agnes Carlier is a veteran F1 media person, having worked in these port at the highest level since the eighties attending most of the Grand Prix races until last year when COVID-19 struck. She has been a friend of GrandPrix247/ YallaF1 since 2009, when the journey began.)