Wollf: Bottas in a good place and he keeps scoring 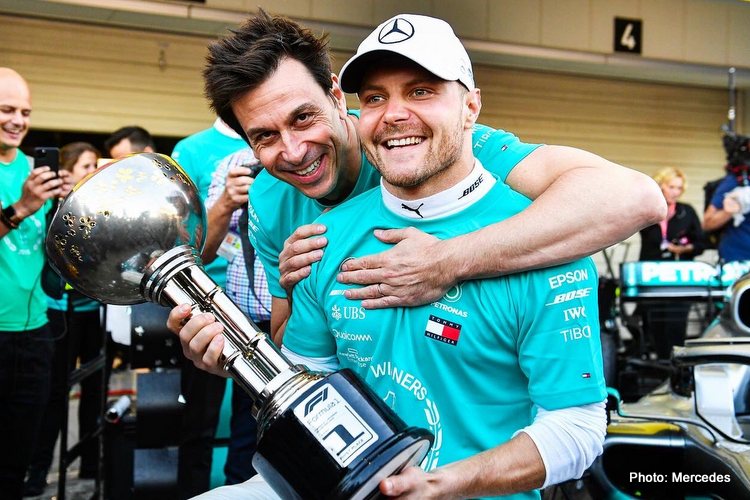 While calls for Valtteri Bottas to be ditched by Mercedes mount, team boss Toto Wolff is standing by his driver who he believes still has the right stuff.

Bottas has the unfortunate task of being Lewis Hamilton’s teammate, and its fair to say that at times he can match the seven-time F1 world champions but most of the time he simply can’t

However, his usefulness as a wingman to Hamilton, reluctant or not, has delivered a sensational pairing that have won constructors’ titles since he joined the team in 2017, with nine victories to his name.

Ignoring the largely English media fervent calls to have him replaced with George Russell, cannot be easy for the quiet-spoken non-confrontational Finn.

Speaking to F1.com Wolff said of Bottas: “I keep saying he’s very strong. He’s in a good place and he keeps scoring.

Speaking after the Spanish Grand Prix, Wolff said: “It was three drivers within a tenth, the weekend before he was on pole. So his speed is enormous. It’s just that when things go wrong at the start, or you’re in a gaggle with other cars and you lose time to the leaders, that’s basically K.O.

“And behind Charles today, I don’t know how much time he lost… 20 seconds or so. And then obviously it’s where you are, you’re third on the road at best.”

Bottas has normally succumbed to team orders and number two treatment when required, but in Barcelona, he was less than co-operative with his teammate charging to victory; Wolff explained: “Racing drivers, their instincts are what they are

“I would have wished, because Lewis was on a totally different strategy, that Lewis would have come through faster, but at the end, we scored the result, and I can relate to Valtteri; he had a tough day again and then you’re annoyed.

“If it had lost us the race, I would have been more critical it’s something we can learn off. But it goes in both directions, and this is something we will be discussing with him but in a very ‘camaraderie’ way,” concluded Wolff.