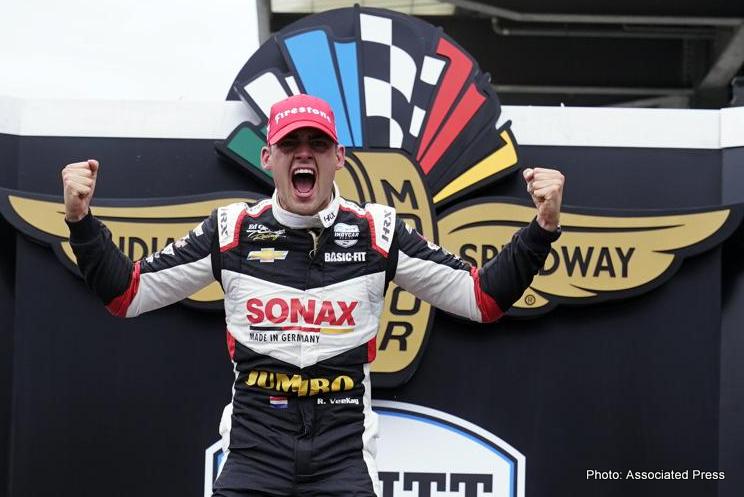 Rinus VeeKay continued the IndyCar youth movement Saturday by scoring his first career victory with a win on the road course at Indianapolis Motor Speedway.

The Dutchman became the third first-time winner through five races this season — the most at this point in the season since 2013.

The 20-year-old is the fourth winner 24 or younger to reach victory lane this season, joining Alex Palou, Colton Herta, and Pato O’Ward in what is quickly becoming a changing of the guard in IndyCar.

Only six-time IndyCar champion Scott Dixon has been to victory lane so far this year for the veterans as the series heads next week into preparations for the Indianapolis 500.

VeeKay sliced through the center of Palou and Jimmie Johnson on a gutsy three-wide pass to show early how aggressive he was at Indy and then chased down pole-sitter Romain Grosjean to take his first lead of the race on lap 45.

Grosjean reclaimed the lead when VeeKay pitted, setting up a potential second showdown. But this time Grosjean was not able to beat VeeKay off pit road and VeeKay was easily past Grosjean before Grosjean got back onto track. VeeKay beat him to the finish line by nearly five seconds.

“I knew we had the car, we were so fast,” VeeKay said after leading 33 laps.

VeeKay won for Ed Carpenter Racing, the first victory for the team since Josef Newgarden won for them in 2016. Newgarden has since moved to Team Penske and won two IndyCar championships.

Grosjean led a race-high 44 laps and finished second for his first podium finish since 2015 in Formula One. The Frenchman survived a fiery crash in Bahrain last November that left him with severe scarring on his hands and marked the end of his F1 career.

He won the pole for the race in just his third IndyCar start — his first pole in 10 years — and the crowd at Indy cheered at the fence for him following his finish.

“Bahrain was horrible but for my life it’s been a great experience and people are really behind me and I can feel it,” Grosjean said. “The support I am having is incredible. You’ve only seen me smiling here in the U.S. and we are happy to be racing here.”

“Leading races, that’s what I came for,” he said.