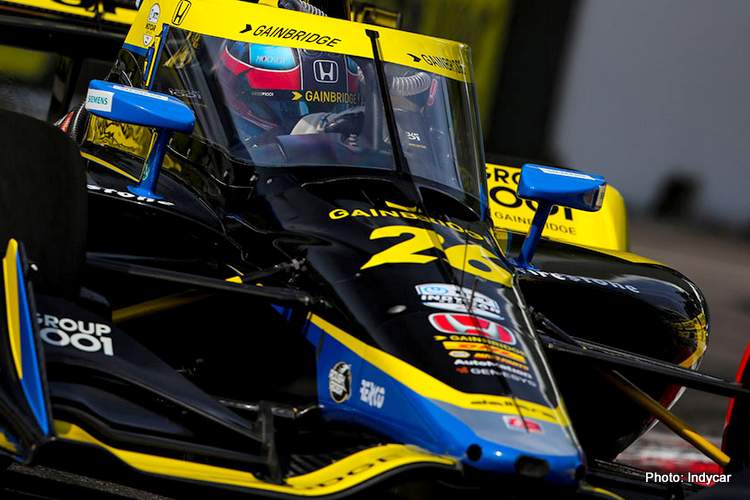 Colton Herta is not going to drive in Formula 1 or for Roger Penske or Chip Ganassi or anywhere but Andretti Autosport for now.

The 21-year-old star signed a two-year contract extension inside the Indianapolis Motor Speedway press box Friday, ending speculation he could move to F1 or another IndyCar team next season.

Losing Herta to another series team would have put team owner Michael Andretti in an awkward position. Andretti competed with and against Herta’s father, Bryan, for years and the two became good friends and long-time racing team partners.

“If he got a good offer from Formula 1, I could see that. But I was more worried about another IndyCar team coming to get him,” Andretti said. “I’ve known him since he was born. so it would have sucked if he went to Penske or Ganassi and we were racing against him.”

Now it’s not something Andretti needs to contemplate.

Herta will continue driving the No. 26 Honda with Gainbridge as the primary sponsor for 2 1/2 more seasons, too.

The announcement comes less than three weeks after Herta earned his fourth career win, this one at St. Petersburg. Herta said the victory may have sped up negotiations to keep one of the hottest free agent prospects off the market.

It took only about two weeks to complete the deal. Herta did acknowledge other IndyCar teams were interested in meeting with him but his current deal didn’t allow him to talk until later this year.

“I don’t really handle the contract stuff, my dad does that, but it’s nice to know you’re going to be in the same seat and with the same team for 2 1/2 years,” Herta said. “I think getting it done early may take the pressure off some people but I’m not one of those people. The goals are the same – to win the (Indianapolis) 500 and the championship.”

Herta already has an impressive resume. In 2019, he became the youngest winner in IndyCar Series history when he won in his third career start just shy of his 19th birthday. Now in his third season, he’s a championship contender.

Herta has qualified in the top 10 in all four of this season’s races, won the pole and led all but three laps at St. Petersburg, and finished fifth in the second race at Texas on May 2.

He’s hoping momentum from the last race will translate into more success during IndyCar’s biggest month, including Saturday’s Indy GP. He could be one of the favourites in the Indy 500 on May 30.

Herta is one of the many young faces IndyCar hopes to build its future around.

The list includes Mexico’s Pato O’Ward and Spain’s Alex Palou, who are second and third in the standings, rookie Scott McLaughlin of New Zealand and Rinus Veekay of the Netherlands.

“As far as young talent, it comes along every so often in IndyCar but not usually like this,” said Herta, the best young American in the group. “There are five, six really good drivers who could be here the next 15 years.”

Herta could be one of them though his successes at such a young age have spurred talk he could be destined for F1, a series dominated by European drivers. He spent time in Europe as a teenager hoping to move through the ranks but wound up coming back to the United States in 2017 and has been in the IndyCar ladder system since.

Andretti struggled in his one and only F1 season in 1993 and isn’t shy about passing along his advice.

“You don’t do it (F1) unless you’re with a top team and Bryan understands that, too,” Andretti said. “Would he succeed in F1? No doubt. He’s got what it takes to do it and he’s lived over there as well, so he understands it.”

For now, Herta seems to be pretty comfortable competing right where he’s been all along.

“I´ve always loved IndyCar most,” Herta said. “I think if it would take a pretty good Formula One offer to draw me away from IndyCar because that´s all I´ve known and all I´ve enjoyed. So I´m going to focus on IndyCar.”