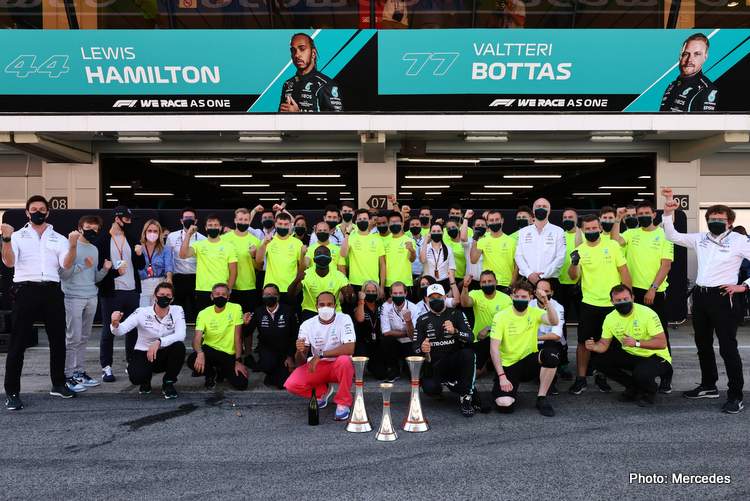 In past years it could be argued that if Mercedes ever erred it was on the side of caution when it came to strategy, but this season they have really nailed it and some bold calls from the team have helped Lewis Hamilton win three of the four races so far this year.

After winning Sunday’s Spanish Grand Prix, Hamilton also has a handy 14 points lead over title rival Max Verstappen whose Red Bull team have been caught napping by some masterstrokes from James Vowles and his team of clever people.

Twice they fooled everyone and twice their calls paid dividends in the best way possible, suggesting that apart from an increasingly potent car they have their strategy guys setting the benchmark to counter the Red Bull menace.

Mika Hakkinen, perhaps with inside info, suggests the World Champions had been planning the strategy throughout the 2021 Spanish Grand Prix weekend and as a result had all the moves covered.

After the intriguing race at Circuit de Barcelona-Catalunya, double F1 World Champion Hakkinen wrote in his Unibet column: “Trust is an important part of the teamwork we see in Formula 1, and Lewis Hamilton’s 98th victory was down to the trust he placed in his race strategists when they called him in for a second pit stop during Sunday’s Spanish Grand Prix.

“To some people this looked like a mistake, leaving Lewis with a 22-second gap to race leader Max Verstappen, but Mercedes’ strategists – based at their team HQ in England – knew that the World Champion had the pace to catch and overtake the Red Bull-Honda.

“This had been planned by Mercedes all weekend. They gave both Lewis and Valtteri Bottas a two-stop strategy option on Sunday by having two sets of medium tyres available – a new set and a used set – while Red Bull only gave Max one set of mediums for the race.

“This is so typical of Mercedes and is the reason why Lewis and Valtteri know they are driving for the best team in Formula 1 at the moment. Not only is the car quick enough to compete with the very strong Red Bull, but the team are on top of their job with strategy calls.

“Even when both Lewis and Valtteri lost positions at the start, Lewis dropping behind Max and Valtteri behind Charles Leclerc’s Ferrari, they were able to recover to finish 1st and 3rd on a circuit where overtaking is extremely difficult.

“It was fantastic to see Lewis take his 100th pole position on Saturday, but with the top 3 covered by only 0.132 seconds, we knew the race was going to be close.

“My former McLaren teammate Ayrton Senna scored 65 pole positions during his career, and my arch-rival Michael Schumacher the previous record of 68, but Lewis has been incredibly consistent during his 15-year career in F1.

“Both his teams, McLaren and Mercedes, have given him quick and reliable cars. But it is Lewis who has pushed the limits, and it’s a brilliant achievement.

“I do not think it will be easy for anyone to beat Lewis’s records in the future, partly because of the way Formula 1 now operates. There is much closer coordination of the rules and regulations between the FIA, Formula One and the teams, and the new budget cap is designed to create more equal opportunity.

“Perhaps no one will ever beat Lewis’s pole position record, and his 98th win on Sunday means that he could easily reach 100 wins by the middle of this season.

As for the challenger – Verstappen – Hakkinen preferred: “I thought Max did a really great job again this weekend, being so close to pole and then taking the lead with an aggressive start.

“Red Bull is very often the quickest on pit stops, so it was a surprise to see Max’s pit stop take four seconds, the team unprepared because Max made a sudden decision to come into pits. That cost them two seconds.

“When you are fighting Mercedes, you cannot afford to lose any time. It did not affect the outcome, because Lewis was so fast after his second pit stop that he was able to catch Max at one second per lap anyway.

“Looking at these first four races, Mercedes has done a fantastic job at using strategy to gain an advantage over Red Bull. The small mistakes from Max have given Lewis opportunities.”

Ferrari appear to be on the rise after a positive weekend in Spain in which Charles Leclerc finished a solid and gutsy fourth and Carlos Sainz seventh in what was a better afternoon for the Reds in some while.

Hakkinen gave his assessment: “Charles started and finished fourth on Sunday, the latest strong and consistent performance from the Monegasque. Ferrari has made a good step this year, its new engine putting them in a close fight with McLaren behind Mercedes and Red Bull.

“Charles has qualified fourth three times from the first four races, usually quicker than Sergio Perez’s Red Bull. If Ferrari can find a little more performance, Charles is right there, looking for a podium.”

Hakkinen also touched on the fact that drivers new to their teams this year are struggling: “The problem for Charles’s teammate Carlos Sainz, along with drivers including Sebastian Vettel (Aston Martin), Fernando Alonso (Alpine) and Daniel Ricciardo (McLaren), is that this year’s three days of pre-season testing gave new driver-car combinations almost no time to settle in.

“These drivers are using the early races to get to know the car, learn how to work with their teams, and start to make the changes to improve performance. This has been one of the interest aspects to watch this year.

“I think we will start to see some of these drivers make big progress in the next Grand Prix. Fernando has already started to put together some good times, and Daniel took a good 6th for McLaren on Sunday.

“It gives us plenty to look out for behind the battle between Lewis, Max and Valtteri at the front,” predicted Hakkinen.