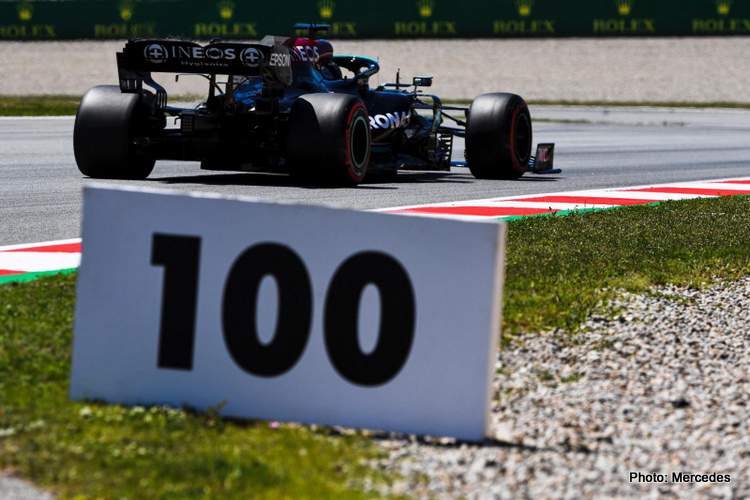 Let’s crunch the numbers from the qualifying session at Circuit De Barcelona-Catalunya and figure out what was really went on Saturday.

Lewis Hamilton beat Max Verstappen to the line by approximately half a car length to earn an exceptional 100th pole position.

The progress chart above show comparisons from each team’s fastest lap today compared to their respective fastest lap in 2020 or 2019, depending which one was faster. The results are stunning for Red Bull as they’ve closed 0.877s to Mercedes earning themselves the ability to fight for pole position.

Mercedes and Aston Martins development are among the weakest, eighth and ninth best and only better than Haas which is much in line with what we’ve seen this season so far. It is clear that Mercedes and Aston Martin have not yet fully begun to reverse the devastating effects of the floor changes newly introduced this year. By direct comparison Red Bull posted the third best progress and only just behind the efforts of Williams and Alpine.

No really obvious errors today from the front three resulting in the order being shaken up, although all three failed to set a faster lap on their second Q3 runs.

Most alarming of the session, pushing aside Tsunoda’s radio transmission was Sergio Perez. We are now at the fourth race of the 2021 championship, he’s not comparable on any scale available to Verstappen and he’s not going to be this year. Perez is currently only comparable to the driver he replaced,  Alexander Albon who shared the same amount of points as Perez does after three races and qualified sixth compared to today’s result of eight for Perez.

Perez left Portimao second-worst in available comparison’s amongst teammates last week, and today has the biggest delta to his teammate of all.

Last year only three cars finished on the lead lap, fingers crossed for a closer race in Spain tomorrow.