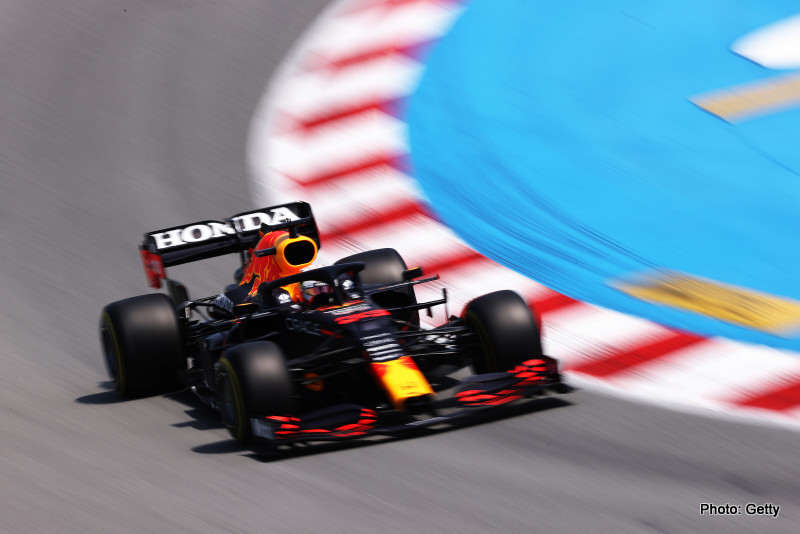 Max Verstappen went quickest during FP3 for the Spanish Grand Prix as Red Bull finally showed their speed ahead of what should be a tight qualifying session.

Lewis Hamilton was 0.235 seconds back in second, while the Ferrari duo of Charles Leclerc and Carlos Sainz impressed to take third and fourth ahead of Valtteri Bottas who was fifth.

Ferrari were the early pacesetters on the soft tyres, Leclerc holding the edge over teammate Sainz at the top of timing sheets while Hamilton, Bottas and Verstappen remained in the garage.

The frontrunners finally emerged with just under 40 minutes remaining, with the Mercedes drivers on the softs and Verstappen on the mediums.

Hamilton was just over a tenth quicker than Bottas on the first run, setting a 1.18.304, while Verstappen was just three tenths back despite opting for the harder compound.

The seven-time world champion put in a 1:18.117 on his second run to extend the lead, before the track cleared as teams prepared for their final qualifying simulations of the weekend.

Leclerc and Sainz were the first out, jumping up to second and third respectively on the soft tyres, while Kimi Raikkonen set a 1.18.597 to move into fifth.

Lando Norris was next to improve with a 1:18.494, a tenth clear of teammate Daniel Ricciardo, before Hamilton failed to go quicker despite improving in sector one and two after running wide at the final chicane.

Norris brought out the yellow flags on his next run after taking a trip through the gravel at Turn 10, but the Brit was able to recover his MCL35M and prevent a stoppage.

Hamilton then improved with a 1:18.070, only for Verstappen to dip below the 1.18.000 mark on his first flying lap on the soft tyres to go fastest.

The Dutchman’s time proved to be enough, with Hamilton second and Bottas fifth, the Mercedes drivers separated by Leclerc and Sainz.

Norris was sixth, with Pierre Gasly seventh and Ricciardo in eighth, while Kimi Raikkonen and the somewhat anonymous Sergio Perez rounded out the top 10.

Fernando Alonso was 11th, less than half of tenth clear of teammate Esteban Ocon in 13th, with Yuki Tsunoda just separating them in 12th.

Lance Stroll and Sebastian Vettel were 14th and 17th for Aston Martin, a slight step back from Friday, with George Russell 15th and Antonio Giovinazzi 16th.

Nicholas Latifi was 18th, ahead of the Haas duo of Mick Schumacher and Nikita Mazepin in 19th and 20th. 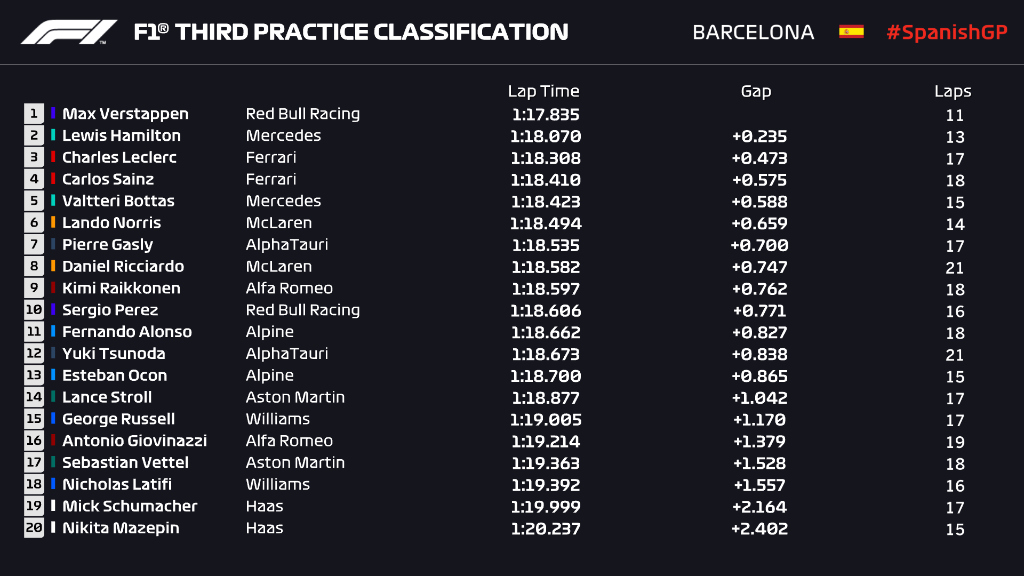