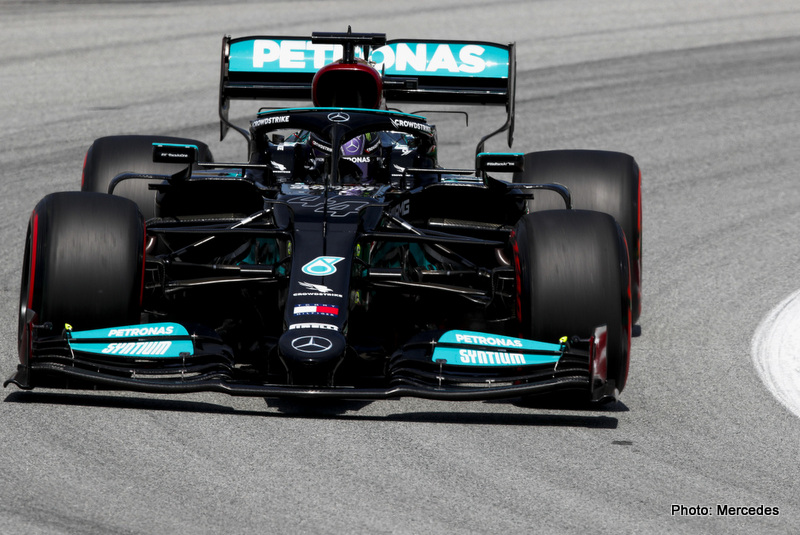 Lewis Hamilton set the best time of the Spanish Grand Prix weekend so far in FP2, with the Mercedes driver more than a tenth clear of teammate Valtteri Bottas.

Charles Leclerc was an impressive third for Ferrari, while Hamilton’s championship rival Max Verstappen was only quick enough for ninth.

The top three started the session on the medium tyre and were soon trading times, with Bottas the first to go quicker than the fastest time from FP1, putting in a 1.18.419.

There was a brief virtual safety car shortly afterwards as the marshals recovered a small piece of Carlos Sainz’s bodywork, with the Ferrari driver returning to the pits as a result.

Switching over to the soft tyres with just under 40 minutes of the session remaining and both of the Mercedes drivers improved. Hamilton was quickest following their first runs with a 1.18.170.

Leclerc jumped up to third after his first lap on the soft tyre, less than two tenths back from Hamilton, with Alpine driver Esteban Ocon also dipping below the 1.18.500 mark to go fourth.

Verstappen’s flying lap attempt on the softs was not so impressive as the Dutchman ran wide in sector three and abandoned his lap after catching the edge of the gravel.

As the session came to a close the focus switched towards high fuel runs and Sunday’s race, with the teams opting for either red-striped soft tyres or yellow-striped mediums.

Hamilton’s best time of 1.18.170 was therefore good enough to see him top the session, with Bottas a tenth back.

Leclerc was third, with Alpine duo Ocon and Fernando Alonso fourth and fifth, another strong showing for the Enstone team.

Pierre Gasly ended up sixth, marginally ahead of his AlphaTauri teammate Yuki Tsunoda, while Sainz was eighth.

Verstappen and Sergio Perez rounded out the top 10, although it does not look as though their headline times are representative of the pace in the Red Bull ahead of an important Saturday qualifying.

Kimi Raikkonen was 16th, with Williams duo George Russell and Nicholas Latifi 17th and 18th, while the Haas combination of Mick Schumacher and Nikita Mazepin rounded out the field. 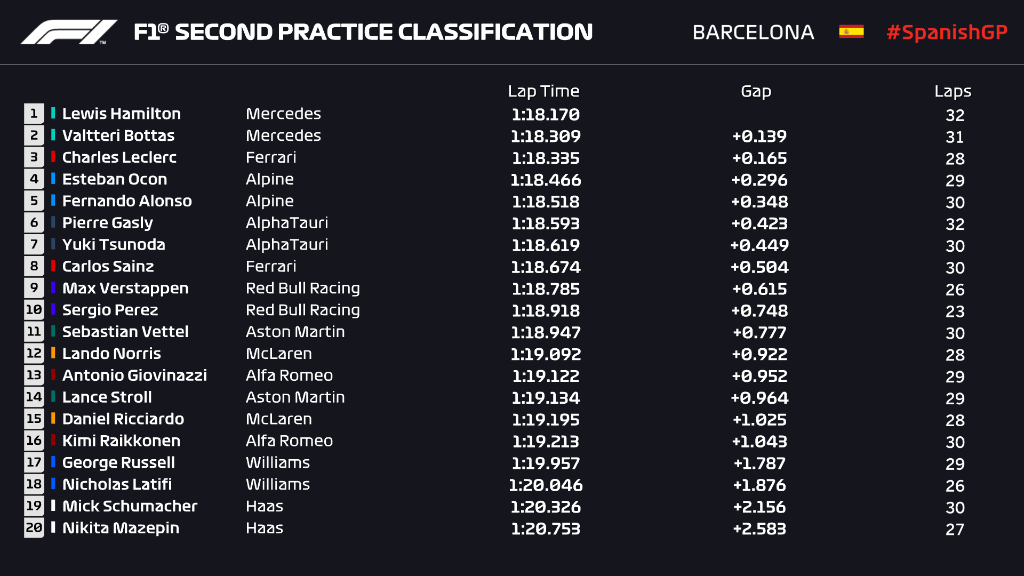