Vettel: Why am I doing it? 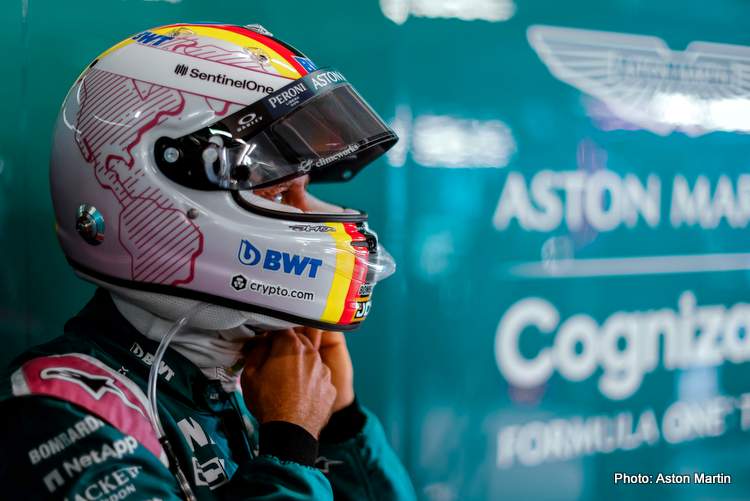 It has been a tough couple of years for Sebastian Vettel, the four-time Formula 1 World Champion is a shadow of his former self, his struggles at Ferrari have been well documented as has the disappointing start to his career at Aston Martin.

While there were vague glimmers of Vettel of old at Sunday’s Portuguese Grand Prix, hardly anything to conjure memories of the precocious driver (in the Red Bull days) and his one-finger salute every time he triumphed or put it on pole. He seemed invincible at the time.

Those old images are now distant memories, gone is the broad, youthful, toothy, cheeky grin, replaced by a less content and unfulfilled driver who, at 33, may well consider Lawrence Stroll’s team as the last chance saloon for his illustrious career.

Begging the question: with 53 F1 victories and four titles, why bother toiling in a hectic midfield? With little chance of reward and certainly no sniff of the podium, let alone the top step.

Departing Ferrari and putting behind him his 2020 annus horribilis, Aston Martin was expected to provide Vettel with a better car than the ineffective Ferrari SF1000 that ultimately led to his downfall at Maranello; he simply could not come to grips with it as his younger teammate Charles Leclerc could.

But Aston Martin dropped the ball this year, last year they had a winning car. This year they have a car that struggles to make it into the top ten.

Thus answering the first inevitable first question he faced in a recent interview with the Guardian, Vettel replied: “Why am I doing it? Because I love it because I still want to prove to myself that I can do what I want to do, what I used to do and in a way that I am happy with.

“In the big picture, the target is quite clear. I want to be at the front of the grid because I have been there so many times and I have learned to enjoy it.”

“I feel that my driving is good and strong but maybe not as consistent and to the level where I want it to be, I need a bit more time in the car and with the team.

“There are plenty of things that I can do better, that I have to do better and I want to do better,” explained the German, who on Sunday will start his 261st Grand Prix.

While Vettel struggles, quite the opposite has occurred with his former nemesis Lewis Hamilton. While Vettel dominated the early part of the last decade, the Mercedes driver has cleaned up just about everything else to affirm himself as one of the best, if not the best driver of this generation.

Vettel, who had some famous battles with the Briton, said of him: “He is probably one of the drivers I have the best understanding with and we definitely share a lot of respect.

“We don’t need to talk about what he has achieved because everybody is aware of that but the man behind that, he has developed and come a long way and in a way maybe he feels I have done the same.

“We will see in 10 years’ time where we both are but we will always have that powerful history and memories, we have a common passion that connects us. As long as I still feel that will to compete I will be here. If that changes, I won’t be. It’s as simple as that.”

As for Hamilton using F1 as a platform to highlight injustices, Vettel said: “The times that we are living in, I cannot see how you can ignore the things that are going on.

“It’s not necessarily only for the world our children will be living in but also the world that we are living in. It commands all of us to change, to act.”

Heading to this weekend’s Spanish Grand Prix, in Barcelona, on the back of a dismal no points scoring Portuguese Grand Prix, the outlook is bleak for Vettel and Aston Martin unless, of course, they find the magic switch or the first three races were an anomaly.

Reality check: not since 2008 in his rookie F1 season has Seb not scored points in the first three races of a season, even last year with the evil Ferrari SF1000 he managed to score twice by round four.

For Vettel to flourish and emerge from the gloom his form is at, Aston Martin need to raise their game substantially and rapidly, for not only him but also the owner’s son – Lance Stroll – whose season has been equally underwhelming in the sister car; the ‘updates’ only he had at Portimao which clearly bombed suggesting misdirection at HQ.

Whatever the case, the Green cars need to provide the firepower of its Pink predecessor and give Vettel a fighting chance, anything less may lead him to ask himself the inevitable question: “Why am I doing it?”