Bottas: There’s always bullshit around its part of F1 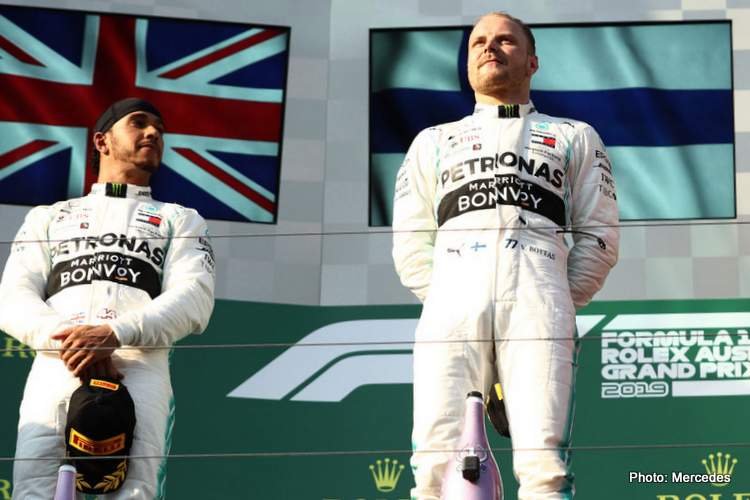 British media are ramping up their efforts to have Valtteri Bottas ousted from Mercedes so that George Russell can step up to partner fellow Englishman Lewis Hamilton in the team but the Finn is having none of it.

Amid a proper trouncing over the first three rounds this year by Hamilton, plus the collision with Russell at Imola, Bottas has given British media an excuse to promote the cause of the young British driver who is deserving a big team seat sooner rather than later.

Some reports on the island Kingdom suggest Toto Wolff, who happens to have mentored and manages Bottas will oust him before the season is over. Which sounds like spin doctoring in full swing.

Reacting to the news, Bottas told Sky F1 ahead of this weekend’s Spanish Grand Prix: “I know that I’m not going to be replaced in the middle of the season. As a team, we don’t do that.

“I have a contract for this year and I think there’s only one team that does that kind of thing in F1, and we are not them. So no pressure from my side. I know how things are – there’s always bullshit around. That’s part of the sport. If I do my job well the talking will stop pretty quickly.”

Bottas will need to start doing his job well ASAP, after four rounds he already trails Hamilton by 37 points and lies fourth in the championship standings.

Nevertheless, Bottas sees the positives: “There are still 20 races to go which is a huge amount of points and I’m definitely not giving up on the goal this year. I believe that hard work will pay off so I will keep working hard and keep believing.”

From the day he signed with Mercedes, there has been speculation about his future with the team. Each year, after being out-performed by Hamilton, the same questions arise.

For now, what happens next year is not on Bottas’ radar: “It’s still early days, I haven’t thought about next year. I’m focused on the here and now. I have no idea and at the moment, I don’t care.”

“About any team orders, I am not worried, not at all. I know there is a gap but it is super-early days and there is no point to think about that.

“I always believe that hard work pays off so I will keep working hard and keep believing. I know the results will come,” added Bottas.

Sportsmail quoted an unnamed Mercedes engineer saying: “There is some unrest at the factory about Valtteri.  He is not up to it, which was made clearer by the job we saw Russell do in Bahrain.”

Which begs the question why would Mercedes want two Alpha males in the team? The Hamilton-Bottas combination has worked a treat and served them so well, hassle-free. History is littered with fantastic race drivers who had to play second fiddle to their teammates.

While at the same time it can be said that Bottas is among the best number two drivers of all time; not a bad thing if you consider Stirling Moss (who never won an F1 title) was an accepting number two to Juan Manuel Fangio.

And, if anything has to be said of the 31-year-old, from the moment he stepped in the door he helped Mercedes attain harmony after the explosive Nico Rosberg days, allowed them to clean up with Hamilton getting the glory because he was simply better.

That’s how history has recorded Bottas’ role since he joined the serial World Champions in 2017.

In this day and age, bringing spring-chicken Russell to take on the Rooster would make little sense for Mercedes, the two Brits will be at each other to the detriment of the team; one driver with too much to prove and another with nothing to prove.

Wolff knows this would be a highly volatile option and would not be unwise to err on the side of caution and keep Bottas in the second car as long as Hamilton is in the team.

But the British media are clearly impatient, ramping up their Russell-to-Merc-campaign and baying for blood.