“Uh Oh”s and “Way To Go”s From Portimao 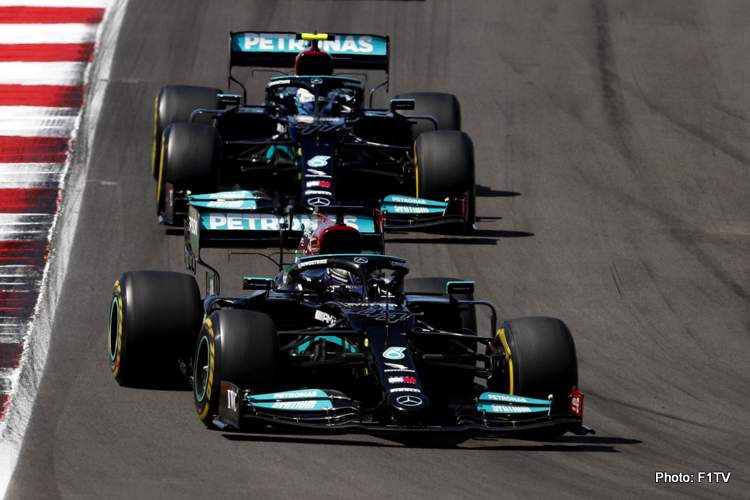 Just like the circuit itself, there were some highs and lows during the Portuguese Grand Prix at the Autodromo do Algarve in Portimao.

Let’s have a look.

Perez was the fan voted driver of the day for the Portuguese GP but his performance was hardly reflective of such – he has won two of the three awards so far this season.

As Lewis Hamilton, Max Verstappen, and Valtteri Bottas locked horns in a direct battle, Perez slipped into the background then ran long on his initial set of tyres in a baffling strategy call by Red Bull with Hamilton eventually catching and passing him as if he were a back-marker. Perez would pit late in the race and despite a new set of soft tyres, Perez was only quicker than Verstappen on one of the remaining 11 laps, 0.7 seconds per lap slower on average. Additionally, with the exception of the Haas drivers, Perez had the worst performance comparisons among all teammates throughout the race.

Perez is undoubtedly an upgrade over Red Bull’s previous driver Alexander Albon but the benefits of the senior Mexican driver have yet to fully ripen into a meaningful gain. Perez is tied on points with Albon after three races by direct comparison at 12 points each, and despite continued claims of good race pace in clean air from Christian Horner the truth is Perez has been 0.3 seconds slower on average per lap compared to Verstappen since assuming the Red Bull challenger.

Order was once again restored in Portugal after a difficult Emilia Romagna Grand Prix seeing Toto Wolff shift into an unlikely damage control mode with his drivers.

The execution was particularly good in round three as both Mercedes drivers worked together to keep Verstappen out of position. If not for a post-pit stop error from Bottas, who lost traction on cold tyres soon after exiting the pits, the result may have very likely been a Mercedes one-two and a devastating blow to Red Bull’s spirit.

Hamilton led the trio home to his 150th points finish securing his 97th Grand Prix victory in the process and was quick to share praise of the calibre of his rivals.

The writing was on the wall in qualifying with how far Ferrari were off in comparison to Alfa Romeo’s year on year development numbers as Ferrari lost 0.6 seconds more per lap than Alfa Romeo did in qualifying trim when comparing 2021 times to 2020.

Qualifying didn’t go well for their main rival McLaren either, who had equally poor Saturday performance. On a weekend with Daniel Ricciardo out of position and a near certain win on points haul in Ferrari’s favour, it ended up being the complete opposite on Sunday. Lando Norris would lead Charles Leclerc to the finish one position ahead of the young Monegasque while Ferrari new comer Carlos Sainz fell out of a points paying position late in the race after a highly questionable strategy call by the Italian outfit.

After showing certain improvement in the first two races, Ferrari slipped behind their performance from last year during the Portuguese GP and worse yet losing an additional four points to McLaren, now sitting 11 points behind in the world constructors’ championship.

Nico Rosberg was flush with commentary and expert opinion this weekend behind the mic with Sky Sports F1, lightly reigniting a tiff with Verstappen after the race. Rosberg, who too has seen the excellence of Hamilton first hand and who exerted far more aggression as Hamilton’s direct nemesis than Verstappen has to date, said “I’m a bit amused because Max Verstappen is starting to understand better and better how good Lewis Hamilton really is. He needs to do everything perfectly to beat him in the championship and at the moment it’s two-one to Lewis.”

It is a simple and concise thought assembly with regards to the Hamilton and Verstappen rivalry to date, so much so that the quote was posed to both Hamilton and Verstappen for commentary in the post-race video conference. Verstappen shutdown Rosberg’s opinion: “Yeah, I don’t need Nico to make me realize how good Lewis is. I know he’s very good, otherwise you don’t win so many championships.”

In 2019 Verstappen called Rosberg the “new Jacques Villeneuve” after a heated exchange of words stemming from comments Rosberg made about Verstappen in his podcast.

It’s a soft “Uh Oh” but a deserving one. With the exception of very selective seasons in Formula 1 history, Max Verstappen’s performance output would easily see him coasting to championships with little effort.

Unfortunately he’s racing during an unprecedented Mercedes and Lewis Hamilton dynasty nearing a full decade of dominance, and not by some stroke of luck either. Verstappen showed in Imola that he’s a fighter complete with a perfect 10 driving performance and a relentless will to win. Unfortunately the Portuguese Grand Prix was more like an eight-ish, maybe even a nine, but worthy of an “Uh Oh” on a circumstantial basis. Max has perhaps learned a lesson which Hamilton himself learned last year in Monza and then again in Russia and it’s a very simple: know the rules.

Pushing aside the matter of FIA constantly changing the rules throughout the weekend, it is clear Verstappen is not aware of the changes being made throughout the weekend. While Red Bull should be briefing him, it’s ultimately on him too. Hamilton responded to the same matter by declaring that he would never let it happen again and accepted full responsibility. Time will tell if Max has too understood the severity of these miniscule blunders.

Alpine looked more like the three-time podium finishing car of 2020 than the newly rebranded team of 2021 in Portimao.

Both drivers registered a welcome points haul with Fernando Alonso showing flashes of his old self running fifth fastest overall in the closing stages of the race, nearly matching Perez. The Alpine also showed good pace on Saturday in qualifying with Esteban Ocon setting the fifth fastest lap of the session in Q2 only two tenths slower than the eventual pole position.

Sunday’s result was indicative of pace capable of joining the McLaren and Ferrari championship battle but sit a distant 40 points out after a difficult first two rounds.

Kimi Raikkonen had an impressive Portuguese Grand Prix race start in 2020 on a damp track. Despite a relatively good start in 2021, Raikkonen took the blame for an embarrassing collision with teammate Antonio Giovinazzi one complete lap into the race.

Raikkonen would later admit to making switch changes on the steering wheel resulting which contributed to the collision. Alfa Romeo remain one of three teams yet to score a point in 2021.

On Lap 24, Sebastian Vettel shoved Schumacher off the circuit into Turn 1. After the race Schumacher walked quickly over to his compatriot exiting his Aston Martin to offer a fist bump, total class. Add in the squabble with Nicholas Latifi and it’s good vibes all around.

It was Aston Martin’s worst weekend on pace so far in 2021 and while there were no reliability fires to stomp out, they leave Portugal with zero points and little time to make corrections for the Spanish Grand Prix.

The Floor Changes – “Way To Go”

The effects of the rule changes introduced to the floor of the cars keeps delivering a more entertaining F1 product three races in.

Lapped cars at the end of races have been less than last year, with Mercedes being dealt a significant blow in both race and qualifying performance losses despite still having a winning car. Last year’s Portuguese Grand Prix saw just four cars finish on the lead lap compared to 11 this year, and 11 finished on the lead lap this year verses nine in Bahrain by the same measure.

F1 heads to the Spanish Grand Prix this coming Sunday, and in 2020 an equally dominant performance from Mercedes resulted in Hamilton outqualifying the first non-Mercedes car of  Verstappen in third by seven tenths. On Sunday the top three qualifiers where the only three cars to finish on the lead lap.