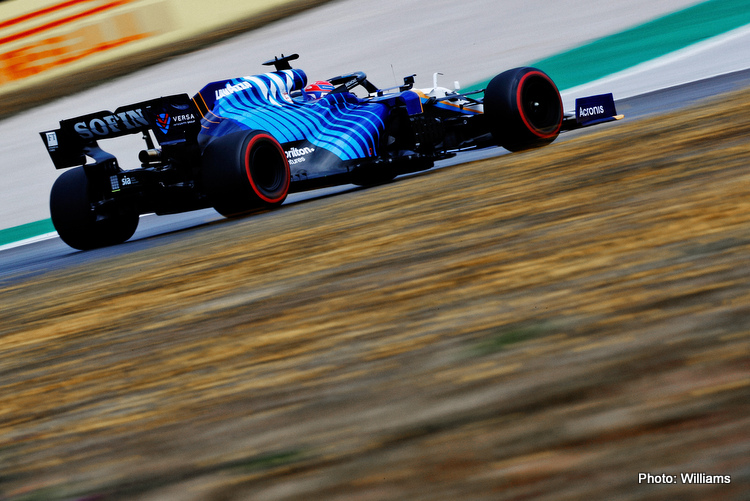 Williams left the 2021 Formula 1 Portuguese Grand Prix at Portimao having extended their point-less run in the sport to 30 races.

The team were given hope when George Russell qualified a personal best 11th on Saturday, but are still without a Q3 appearance since Lance Stroll clinched 10th at Monza in 2018.

During the race, Russell sank down the field, having clearly outperformed his car on Saturday, as has been the trend.

On one-lap pace, Russell was just 0.05 seconds from making the final stage of qualifying, but in the race, the Williams finished a disappointing 73 seconds away from a 10th place finish and a points-paying finish.

“It’s probably one of the most challenging races I’ve had since 2019,” Russell said. “Just following other cars with this wind it was just absolutely undriveable.

“It was just a race of survival in the opening laps, just literally doing my best to keep the car on the black stuff which is not what racing is about, so it was a real shame.

“It’s really challenging from within because you feel a bit of an amateur when the car is driving you as opposed to you driving the car, but that’s the nature of the beast at the moment.”

Williams’ head of vehicle performance Dave Robson acknowledges that points and Q3 appearances are not “inevitable” this season, despite signs of promise.

Speaking after the race, Robson said: “There’s still a lot of work to do, for sure. But I think we’re heading in the right direction – the momentum is good.

“I’m glad we backed up the performance in Imola [qualifying], there’s still a lot of work to do in the race.”

Robson also mentioned that it was a shame to see Alpine perform so well in the race after bringing upgrades, as Williams thought they were getting “pretty close” to the French team.

“I wouldn’t say it’s inevitable. We’re pushing towards that top 10, but it’s so dependent on how each team develops their car over the coming weeks now.