Verstappen: This was an off weekend in terms of overall pace 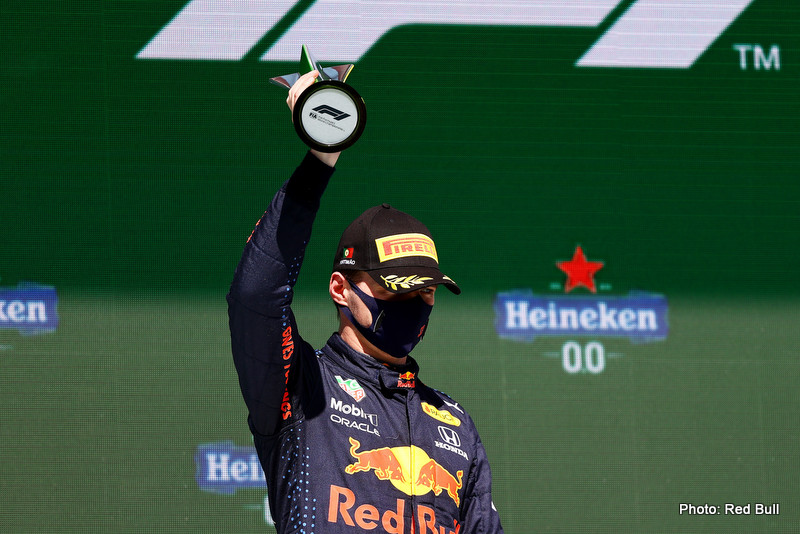 Max Verstappen thinks that the Portuguese Grand Prix was an “off weekend” for Red Bull in terms of their grip levels and overall pace.

Verstappen qualified second, but could have had pole after having the quickest lap of Q3 deleted for exceeding track limits, and was able to get past Lewis Hamilton and into second following the early safety car restart.

However, Hamilton hit back and reclaimed the position, before taking the lead from Bottas and going on to secure his second race win of the 2021 Formula 1 season.

Verstappen got ahead of Bottas following the pit stop phase, with the Dutchman taking advantage of the Finn’s cold tyres with an excellent move.

Speaking after the race, Verstappen said that he was happy with second place and expects Red Bull to be more competitive in the future.

“Something about this track really does not suit our car and I think in general this was a bit of an off weekend in terms of grip and overall pace,” he said. “We knew last year that we weren’t particularly strong here, so this year has been a bit better and we managed to finish ahead of one Mercedes, but it wasn’t quite good enough to get them both.

“Nevertheless, second is still a pretty good result and we always knew this season would be up and down in terms of the tracks we were strong at and the ones Mercedes were. The race today was pretty decent though and we were all constantly pushing which was nice.

“I tried to put the pressure on Valtteri in the beginning as he was struggling for grip, but clearly Lewis behind had more pace and he made it past us both. I was then able to undercut Valtteri in the pit stop but you could clearly see on the hard tyres we were just a bit slower, some laps we could match Lewis and others it was just not possible. Towards the end of the race Valtteri was even coming back at me which showed their pace today.”

Verstappen looked to have sealed the fastest lap point late on, but had the lap deleted for exceeding track limits, a fact that Paul Di Resta had to awkwardly reveal to him their post-race interview.

“It’s a shame the Fastest Lap got taken away, stupid track limits [laughs], they should just put gravel back,” he added.

“It is what it is, we always try and I had the gap so we went for it. We scored good points here but I’m looking forward to Barcelona, a track that has more normal grip levels and where I have good memories.

“I think we will also see a clearer picture of how teams have been progressing. It’s a long season ahead so a lot can happen.”