Perez: I went straight into wheelspin off the line 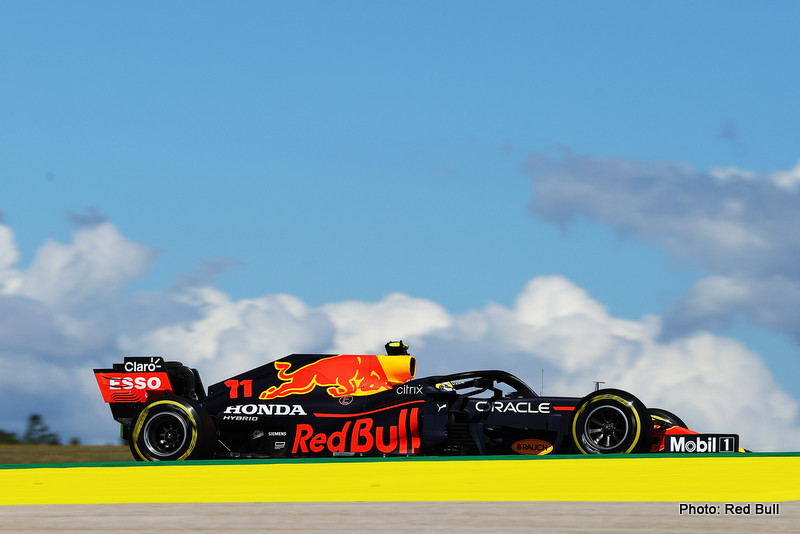 Sergio Perez has explained the reason behind his slow start to the Portuguese Grand Prix, which saw him fall back to fifth place.

It was Carlos Sainz who got passed Perez initially, before both the Red Bull man and Lando Norris were able to overtake the Ferrari driver, with Norris taking fourth.

Perez was able to get back passed Norris a few laps later, but the time loss meant that he could not play a role in the battle for the win between Lewis Hamilton and Max Verstappen.

The Mexican finished the race in fourth, his best result since arriving at Red Bull, and spent laps in the lead before being passed by Hamilton.

Reflecting on his slow start, Perez said that he got wheelspin off the line and then failed to fight Norris hard enough for fourth place.

“I made it a bit messy here,” he told Sky Sports F1. “It started off the line – being on my side, there wasn’t a lot of grip and I went straight into wheelspin so I lost a position to Carlos.

“Then I recovered the position after the restart, but then I lost it to Lando into turn five.

“Therefore, I didn’t fight the position hard enough, thinking that he was going to give me back the place.

“But I probably misjudged that one. It took me a couple of laps to get past Lando and that created a gap to the leader that I was basically off the race by then.

“It’s just a process, I guess. And hopefully very soon I can be at home with the race, with the team and very much feel with it.”