Hamilton: Having races like that is what I live for 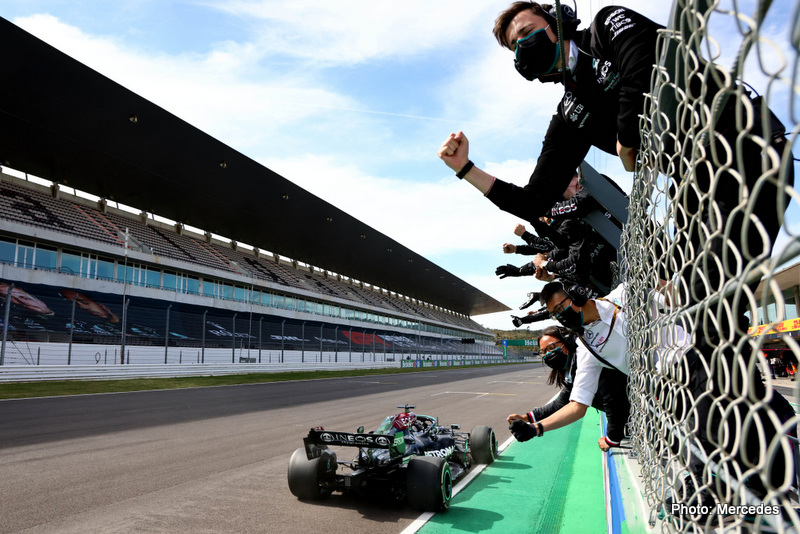 Lewis Hamilton was delighted with his Portuguese Grand Prix victory at Portimao, describing his second win of the 2021 Formula 1 season as “amazing”.

Beaten to pole position by 0.007 seconds, Hamilton was unable to jump ahead of Valtteri Bottas at the start, before being overtaken by Max Verstappen following an early safety car restart.

However, Hamilton was able to hit back at the Dutchman a few laps later, before completing an impressive pass around the outside of Bottas to claim the lead.

From then on he controlled the race from the front, securing a 97th career win in the process.

“That was such a tough race, physically and mentally, just keeping everything together,” Hamilton said after the race. “It was very windy out there, obviously, so it was easy to put a foot wrong.

“I didn’t quite get as good a start as Valtteri, then lost out on the restart which was not good. I was not happy about that, naturally. But that race was satisfying, when you’re in third and have to overtake two amazing drivers – amazing! Having races like that is what I live for.

“The gap between us all is so close and every single point is going to count this year. I love the battle, I’ve loved it since my days in karting and as a team, we can’t leave any stone unturned – we’ve got to continue to push this car, squeeze everything out of it.”

Three races into the season and Hamilton has an eight point advantage over Verstappen at the top of the drivers’ championship.

F1 heads to Circuit de Barcelona-Catalunya next weekend for the Spanish Grand Prix.