Bottas: I was struggling for pace and don’t understand why 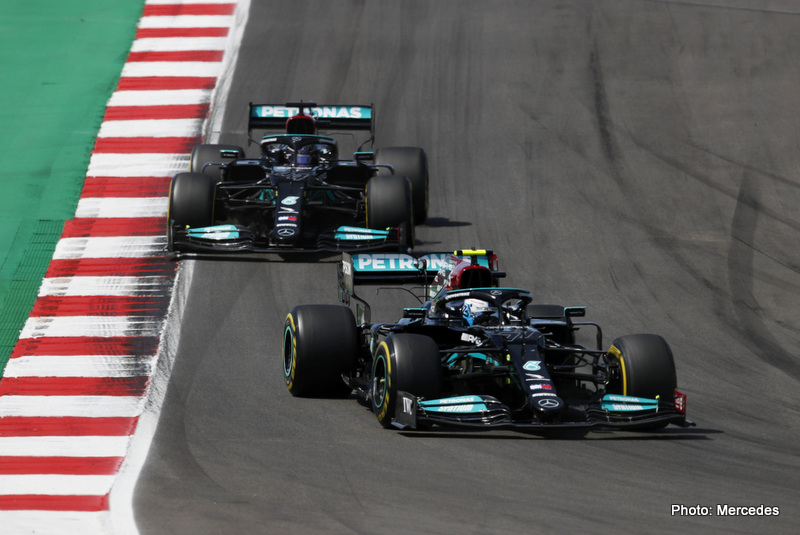 Valtteri Bottas does not understand why he lacked pace during the Portuguese Grand Prix at Portimao, where he finished third despite starting on pole position.

The Finn got away well at the start, but came under pressure from both Max Verstappen and then Lewis Hamilton, with Hamilton passing him for the lead on lap 20.

Bottas was able to keep Verstappen at bay for the remainder of the first stint, but was overtaken by the Dutchman shortly after exiting the pits, with Verstappen enjoying better heat in his tyres.

The Mercedes man looked like he might be able to hit back and got to within a second of the Red Bull driver, but fell back again following a sensor issue.

He did manage to take the fastest lap and the final spot on the podium, but is fourth in the drivers’ championship after the first three races of the year.

“Obviously not what I was aiming for today because when you start from pole, you want to bring home the win,” Bottas said. “I think ultimately the main issue was the first stint – I was struggling for pace and I still don’t understand why.

“The warm-up with the hard tyre was slow after the pit stop and Max managed to catch me. Then we had an exhaust temperature sensor issue later in the race which cost me speed on the straight so it was difficult to close in on Max and fight for P2. Eventually the power came back and I was able to set the fastest lap which could be an important point.

“We need to analyse this weekend over the next two days, learn the lessons and then focus on next weekend – we go again.”