Norris: We could have been third or fourth 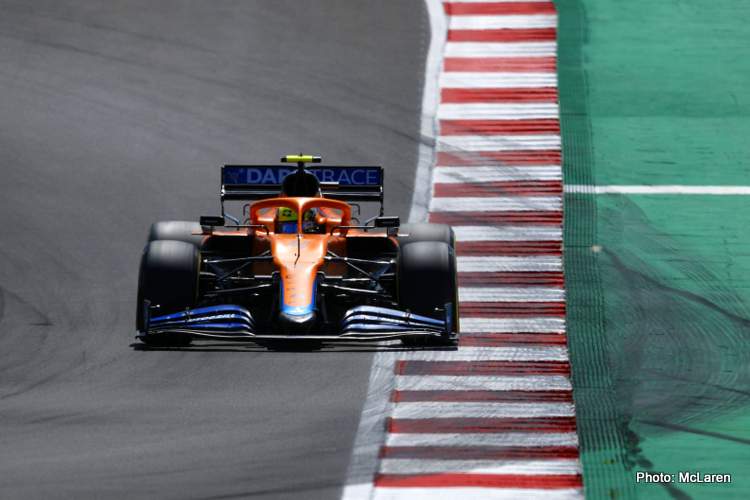 Lando Norris’ shares keep on soaring, this time around the 21-year-old qualified seventh for the 2021 Portuguese Grand Prix, which he believes might have been a lot higher up had fortune favoured him.

Nevertheless, it was a sparkling performance by Norris as he was way better than out of sorts Daniel Ricciardo in the other McLaren. In Q1, Norris was a second a full second and a bit up his teammate and progressed to Q3 with ease. Dan was out in Q1.

Norris said in the team report: “Reasonably happy with today. A little bit annoyed because we could’ve been a few positions further up – maybe three – and fourth on the grid, I would say. I can be confident in saying that.

“I got caught on my Q3 run two-lap on the new tyre because of another car backing up in front of me out of the last corner, so I had to abort the lap quite early on, which was frustrating.

“Apart from that, I’m pleased with my performance today. The car was good. Tricky to drive, but fast, and I was still P7, surprisingly, so I’m happy. There are definitely some positives and we’ll see what we can do in the race tomorrow,” added Norris.

McLaren team boss Andreas Seidl was impressed: “It was again great to see the potential of the car at this track with an in-form Lando behind the wheel. Ending up P7 feels like a disappointment at the moment, looking at the lap-time Lando did in Q2.

The track got slower in Q3 and conditions were very inconsistent, but still a better position was possible. Unfortunately, on his final run in Q3 he got caught out by another car slowing in front of him, so he didn’t get a chance to set a time on the new tyres,” explained Seidl.

As for the race on Sunday, he added: “On the positive side, it was again great to see the potential competitiveness of the car, which is a result of the continuous development and hard work by the team back at the factory. Those improvements in performance are very encouraging and we’ll take them with us into the race.”

Last year in Portimao, the McLarens were seventh and eighth after qualy, with Carlos Sainz a tad quicker than Norris. The Spaniard finished sixth in the race the next day, with Norris 13th after he was clattered into by Lance Stroll’s Racing Point early in the race.