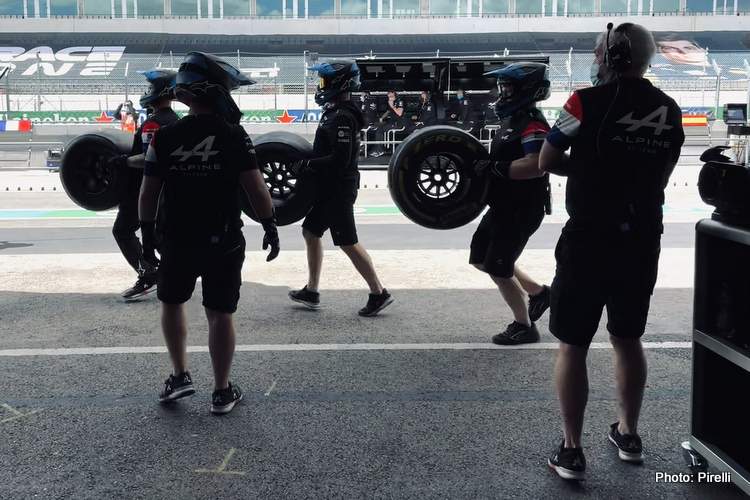 Valtteri Bottas secured pole position for the Portuguese Grand Prix on Saturday, thanks to being the fastest driver in the extremely tricky conditions that prevailed in Q3.

Let’s crunch the numbers from a challenging session at Autodromo do Algarve and figure out what was really go on Saturday during Portimao qualifying.

The changes to the floor of the cars introduced by the FIA this year are still proving effective in terms of the reduction of lap time. It has also played havoc with the drivers as seemingly every driver is still struggling with the snappy rear-end characteristics of their cars.

McLaren and Williams were the first teams to dip below their qualifying times compared to 2020 in Imola, but the results are much different this time out. During the qualifying session of the Portuguese GP, an average delta to last years’ lap times were approximately 1.5s.

Ferrari has had a misstep as the car simply did not pack the punch of the two previous races. A good indicator of the struggle is a direct comparison from Alfa Romeo to Ferrari as Ferrari were significantly bettered by Alfa Romeo.

That being said, their true fight this year is directly with McLaren and look to be in good position to pounce on McLaren especially with a rare big “uh oh” from Daniel Ricciardo with an unexpected Q1 exit.

As Ferrari did not pack a punch in qualifying, McLaren too did not put in the expected session with Lando Norris behind Carlos Sainz and starts just ahead on the same row as Leclerc. Leclerc is well known for aggressive starts and will have his hands full with Leclerc.

Mercedes had an admirable year on year progress with their best qualifying session this year showing fifth-best in Portugal.

The pre-season test where Red Bull and AlphaTauri looked supreme seems like a distant memory as both dipped in performance. Arguably slightly misrepresented as Verstappen did have more pace, but just slightly off in the end for the Honda pair.

The results of progress for Alpine and Aston Martin are parallel in that both are extreme. Alpine are off to their worst start to a season since 2017 and seemingly out of nowhere have qualified like they did in 2020.

Aston Martin on the other hand was fifth quickest last year in pink, and although Vettel put in his strong session this year, the numbers are unfavourable to their current plight, the car is not getting better.

We start where the most credit is due, Valtteri Bottas. The most polarizing stat of qualifying is that not a single driver went faster in Q3 except for Bottas, and that’s the entire story. Every driver either screwed up or struggled with the wind and Bottas didn’t.

Lewis Hamilton delivered the fastest lap of all drivers during Q2 at -0.380 to the eventual pole position time of Bottas. He did not connect in Q3 instead appearing to chop wood from the seat of his Mercedes aggressively demanding cooperation from his car and clearly not getting it.

Hamilton looking certain to secure his 100th pole in Portugal instead let Bottas steal one from him with an alarming +0.380 error in Q3.

Max Verstappen delivered a 1:18.209 in Q3, well quick enough for pole position and then it was deleted due to a track infringement penalty. Verstappen has made at least one silly mistake in every qualifying session this year.

In Bahrain he claimed pole but in Q1 ran wide in Turn 2 bouncing his car violently on the curbs. In Imola he was wide into the grass on the Turn 3 exit arguably costing him pole position in Q3.

Today a rear-end snap in Turn 4 resulted in running wide resulting in the deletion of a pole capable lap. It will take the 10/10 driving perfection of Imola to catapult himself into race-winning position with how good the Mercedes have looked this weekend, and more appropriately, how good Mercedes have looked on Sundays.

The qualifying order looks bizarre with McLaren and Alpine shown as second and third quickest car today. It really puts into perspective the chaos that was Q3. Lando Norris was +0.635 in Q3 to Q2 and Ocon +0.456 by the same measure. Leclerc was +0.537 and Vettel was the biggest loser in lost pace from Q2 to Q3 at +0.689.

Last year only 4 cars finished on the lead lap, fingers crossed for a closer race in Portimao tomorrow. 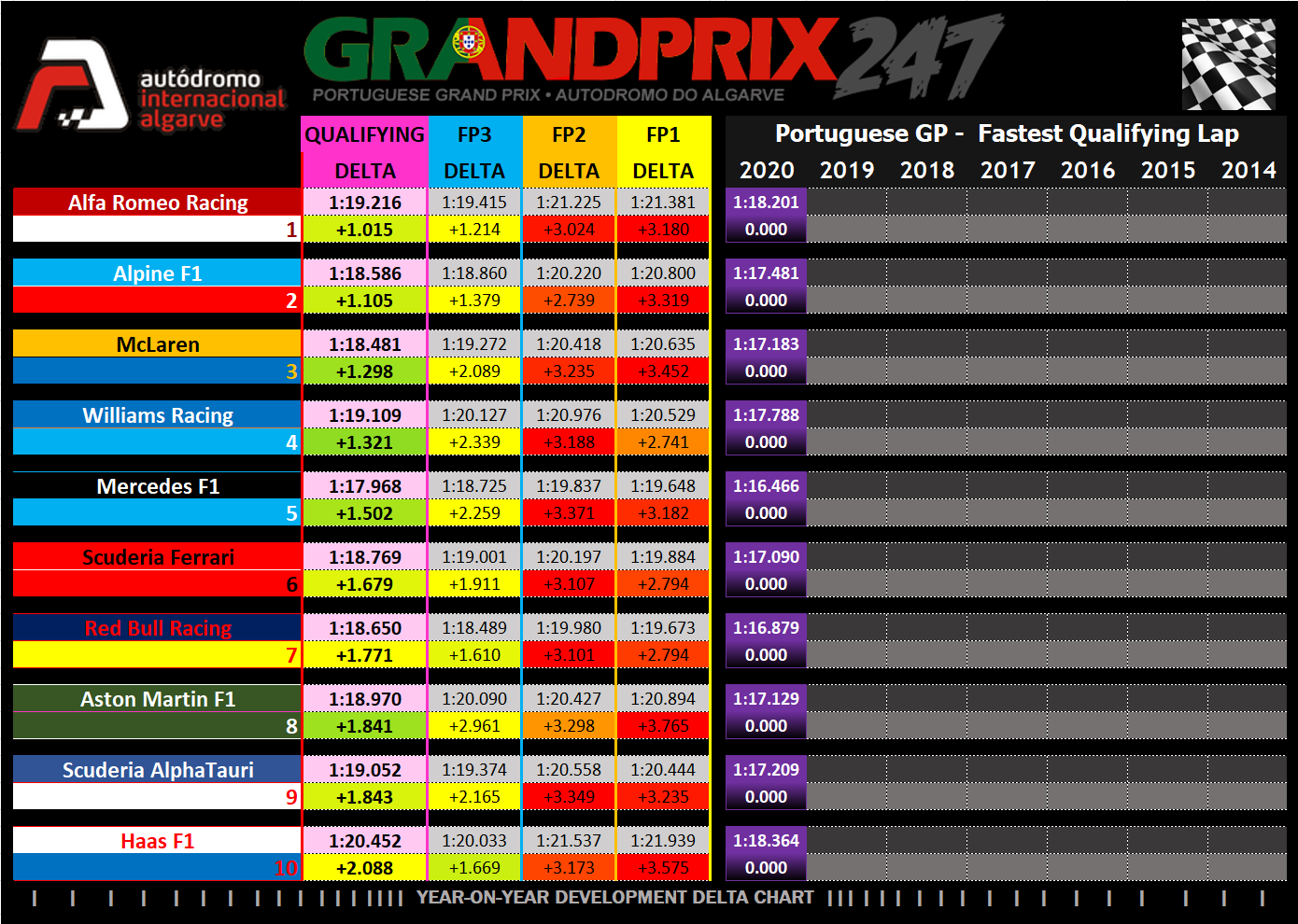 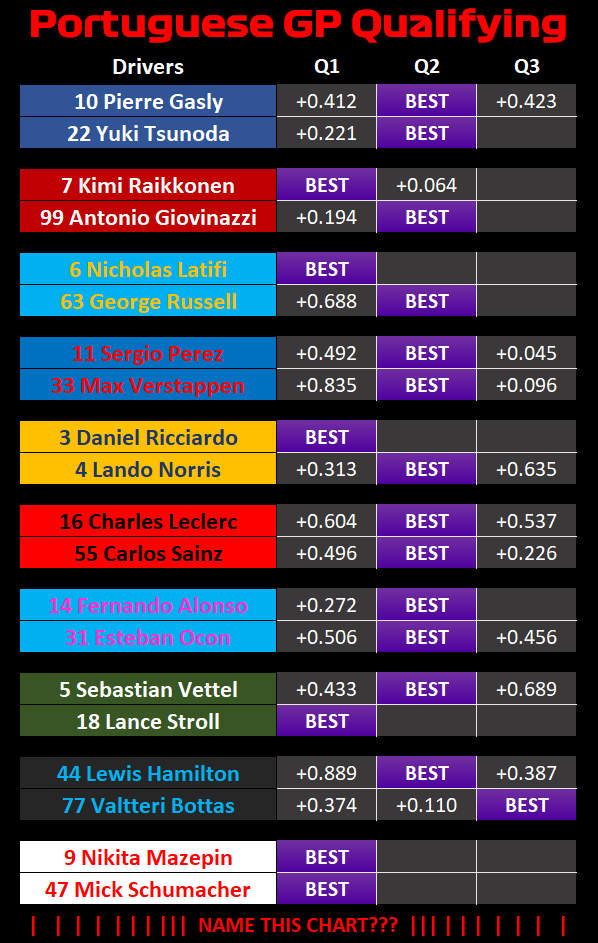