Bottas: We need to focus on the race start 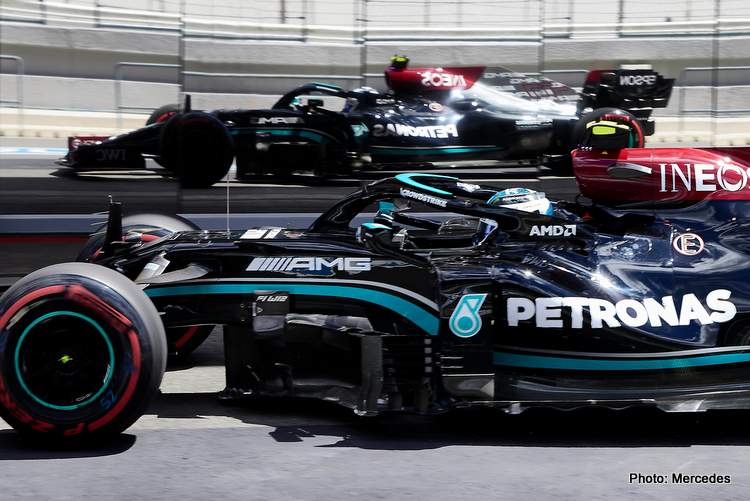 Valtteri Bottas had a plan during qualifying for the 2021 Portuguese Grand Prix and it worked a treat, as the Mercedes driver upset the form book to take pole for tomorrow’s race but says the start on Sunday will be crucial.

As he wound down after claiming top spot on the grid, Bottas and his engineer shared an “I told you so” remark suggesting that his side of the garage had concocted a plan to upstage Lewis Hamilton.

The margin was a minuscule 0.007 of a second between the pair with the World Champion gamely admitting he gave it his best shot but on the day his teammate’s A-Game was too good.

Bottas said of his afternoon: “It’s a good feeling to be on pole. Feels like it’s been a while. It’s been a weak point for me in the first two races. The team have been working hard all weekend and we have a good position for tomorrow.

“It felt better with the mediums. Like last year, we put the mediums on at the end of qualifying and we tried it again but I think maybe the wind picked up on the last run and I couldn’t quite get the temperature in them, so I’m glad we still had a good result.

“Starting with the medium tyre tomorrow is good, and it opens up opportunities that we can go as long as we want in the first stint. We need to focus on the race start and then go from there.”

Indeed the race start will be tricky, with two angry Red Bulls behind the two Mercedes and a long drag to Turn 1 is sure to put Bottas under immediate pressure, as will hamilton of course.

Bottas added later in the Mercedes qualifying report: “We worked hard to figure out the issues I was experiencing in qualifying, we put things right and this is the result – it’s more like how it should be, so

“I’m happy. In the first two races, I knew the speed was there but my main issue was tyre warm-up. We’ve put a lot of focus on that, we learned some lessons and I always knew our hard work would pay off. The key was to stay calm, execute the plan and focus on the small details, particularly on the out-laps.

“We’ve been stronger than expected which is a positive surprise but it’s only qualifying, I’m already thinking about tomorrow. We know the Red Bulls have a strong race car and we are expecting an epic battle,” predicted Bottas, who will be hunting his tenth Grand Prix victory on Sunday in Portugal.

“It’s also a fine result for the team to be starting with both cars on the front row – the 75th front row of the modern era for Mercedes F1.”