Berger: Ayrton was laughing under his helmet 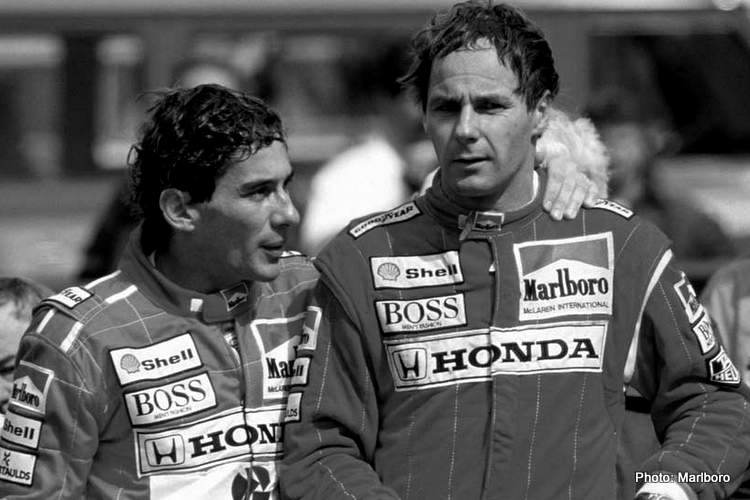 Gerhard Berger was Ayrton Senna close friend, once teammates at McLaren they hit it off in a big way, their adventures and misadventures the stuff of legend.

So much has been written and said, analysed and dissected about the fateful day – 1 May 1994 – when Ayrton was robbed of his life at Imola, in an accident that is etched into everyone’s memory.

On Saturday, during qualifying at Imola that weekend; the world was shocked by the death of Roland Ratzenberger, as well as a massive crash that may have killed Rubens Barrichello too.

It was a very crazy weekend that has left the sport scarred ever since.

On the Sunday of the 1994 San Marino Grand Prix, Senna’s Williams was on pole; with Michael Schumacher alongside him in the Williams and Berger, in the McLaren, behind Ayrton on the grid.

The great Brazilian would be 62-year-old today.

In 2019, speaking to The Independent for the first time about the tragedy. Berger, a 10-time Formula 1 winner, recalled the day 27 years ago in which he lost a great mate, and the sport lost one of its favourite sons:

“The San Marino Grand Prix in 1994 was a crazy weekend. On Friday, Rubens Barrichello had a very heavy crash and ended up in the grandstands.

“Then, Roland Ratzenberger was killed in qualifying before we had Ayrton’s accident the following day. There were other terrible incidents in the race, too.

“It was like 10 years of Formula 1 danger concentrated into one really strange weekend.

“I had an accident at the same corner as Ayrton in 1989. When I was in the hospital, Ayrton phoned me and asked how I was. I told him I was hurting, and suffering from the burns as my car caught on fire, but I said ‘Ayrton, we need to move this wall because one day somebody is going to die there’.

“He agreed. The next time we were at Imola we went to see what we could do about it. I remember it like it was yesterday.

“At lunch, Ayrton and I walked out from the pit-lane and down to the Tamburello corner. We looked over the wall and behind it there is a river. We both looked at each other and said there isn’t anything we can do.

“There is no space behind the wall, we didn’t think about putting in a chicane to slow the cars down, and we just accepted it for what it was. So, we walked back and didn’t do anything. That was the place where he would die some years later.

“After Roland’s death in qualifying, we came out of the drivers’ briefing on Sunday morning before the race and Ayrton said to me that next week we need to do more to make this sport safe.

“We went to the grid, and Ayrton was on pole. I was driving for Ferrari and getting a lot of support from the tifosi. I was out of the car, he was in his Williams.

“I remember looking at him, and he was laughing under his helmet. He had always been happy when something good was happening to me. That was my last eye contact with him.

“We started the race and Michael Schumacher was behind Ayrton, and I was behind Michael. I remember exactly when Ayrton started to go off the track. He crashed, and I thought he had hit the wall at a good angle and there would be no problem.

“They stopped the race and I saw Bernie Ecclestone who said Ayrton was out of the car. I thought that meant he was okay so didn’t ask anything else about it and restarted the race as usual.

“So I arranged a helicopter to Bologna to see him in hospital. Professor Sid Watkins, the Formula 1 doctor, was there and told me it didn’t look good, but asked if I wanted to see him in the operation room.

“I went in and they were doing something with his head as it was covered, but he was already dead. We stood in front of him for a while and then we left. Immediately after this it was confirmed he had died.

“I lost a colleague and a friend. It was very hard, but you know that these things can happen in our sport and you have to cope with it. I went home and considered stopping. But then two days later I decided I had to keep going.

“It went back to normal quite soon because racing is racing. But there were times when I would think: shit, imagine if Ayrton was still in the Williams when Damon Hill and Jacques Villeneuve won their titles?’

“Had he been alive, I don’t think anyone other than Ayrton would have won the championship for the next five years,” concluded Berger.