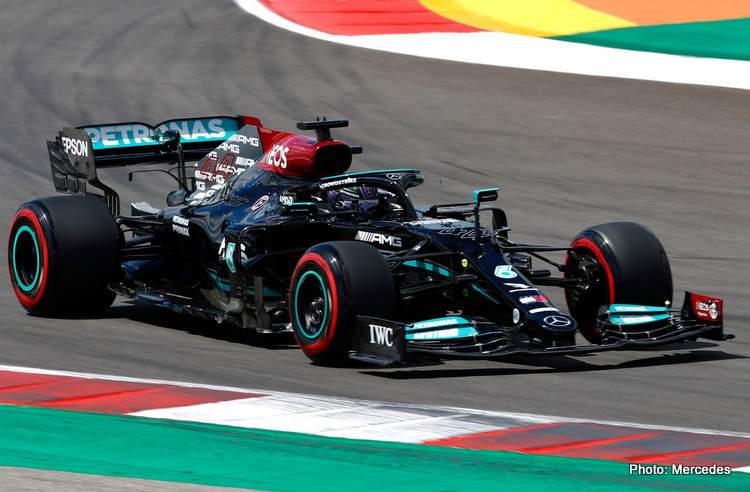 This season’s chief protagonists for the Formula 1 World Championship, Lewis Hamilton and Max Verstappen topped the timing screens at the end of the first day of free practice for the 2021 Portuguese Grand Prix.

Hamilton was the quickest for Mercedes with a best lap of 1:19.837, a tenth and a half up on Red Bull’s Max Verstappen followed by Valtteri Bottas, who topped the morning stanza,  in the other Black Arrow. Sergio Perez in the other Red Bull was only good for tenth, six tenths down on the top time.

For now it’s Max versus Mercedes, but one would expect Perez to dial himself into the fray as he did at Imola to set the stage for what should be another cracking qualifying tomorrow and the race on Sunday.

On Friday’s evidence, Mercedes appear to have closed the gap of the past two races to Red Bull and may even have the edge in the Algarve hillside on outright pace but then we will only really know when they pump it up for Qualifying tomorrow.

It’s worth remembering that Hamilton and Bottas dominated at the venue last year.

On the day, three tenths and a bit down on the top time, Carlos Sainz was fastest of the Ferrari pair in fourth place with Charles Leclerc in seventh, a couple of tenths between the pair.

In a Ferrari sandwich on the timesheets, both Alpines had a positive day, with Fernando Alonso getting stronger with every outing to end fifth fastest, fractionally faster than teammate Esteban Ocon in sixth suggesting a big step for the former Renault team.

Tomorrow’s qualifying will confirm or not if indeed they have extracted pace from their package for this weekend.

McLaren appeared to be AWOL or keeping their powder dry with Daniel Ricciardo eighth and Lando Norris 12th, not quite at the level they have been in the first two races of the season.

Lance Stroll was ninth in the Aston Martin, six tenths down on the benchmark time and, notably, six tenths faster than new teammate Sebastian Vettel who was only good for 15th.

The gap between Stroll and Vettel is akin to the difference in pace between Leclerc and the German when they were teammates at Ferrari until last year.

Surprisingly out of the top ten were both the AlphaTauri’s with Pierre Gasly 11th and rookie Yuki Tsunoda 14th, while George Russell looks intent on getting that Williams beyond Q1. He was 13th fastest, while teammate Nicolas Latifi was down in 19th.

In closing, Ferrari power is hardly the piece of kit to have bolted to your car, four of their customer cars were in the bottom five with Nikita Mazepin slowest of all, over a full second down on teammate Mick Schumacher in 18th and 2.8 seconds down on Hamilton’s best effort. 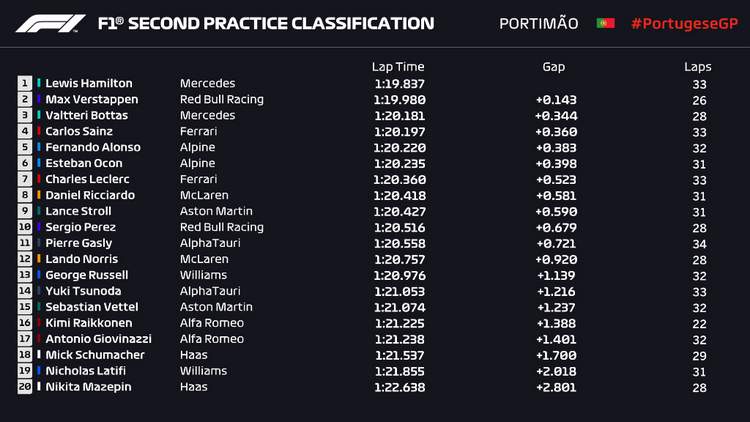