Jos Verstappen: I think we should be prepared for a lot 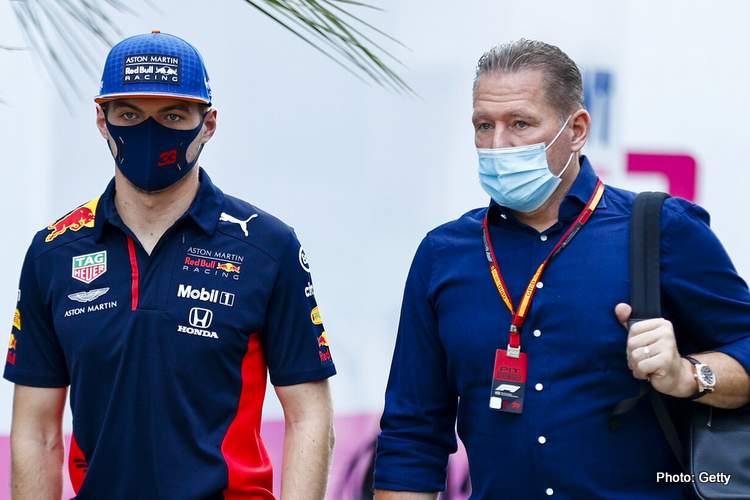 Jos Verstappen is predicting fireworks between his son Max and reigning Formula 1 World Champion Lewis Hamilton, as the two emerge as the main protagonists of the 2021 season.

The score is 1-1 in qualifying and races after the first two enthralling rounds of the Championship, now they head to this weekend’s Portuguese Grand Prix, and Verstappen senior warns that more intensity can be expected.

While both Hamilton and Verstappen have great respect for one another, there is already needle between them after the Battle in Bahrain and the Italian Job.

At Imola, the pair famously ‘rubbed’ shoulders as they strutted their stuff during parc ferme interviews, after Hamilton stole pole from Verstappen. The clip went viral.

Jos pointed out in an interview with Ziggo Sport: “I think we should be prepared for a lot. It will be an intense and great year.

“A sign for me is this shoulder rub after Imola’s qualifying. We are talking about two drivers who will not give in. Neither of them will allow themselves to be pushed aside – especially not when the battle for the title comes to a head.”

Already they have had a scrap, in Bahrain, and a scrape at Imola but nothing major but it is very early days which will only intensify as the season ramps up with the doubleheader in Portugal this weekend and Spain next week.

The pecking order this year is clearly Mercedes and Red Bull ahead of their other rivals, with the Blues stronger than ever so early on in the season to take on the Mercedes juggernaut. It’s a toss-up, regarding who has the edge.

Jos continued: “Toto Wolff keeps saying that Red Bull Racing has the best car and Christian Horner counters that Mercedes is the favourite. I think this is how it will work in the end – sometimes one car is faster, sometimes the other, depending on the runway layout and the ambient temperatures.

“The fact that Red Bull and Honda are now capable of winning every race creates a certain calm on the one hand but also increases the pressure on the other. ”

When asked about new arrival Ben Hodgkinson from Mercedes to Red Bull’s new powertrains project, Verstappen senior said: “I heard of Hodgkinson’s arrival from internal talks within the team, he is a great engineer with a great deal of experience and knowledge of the Mercedes power unit. An excellent buy.

“As long as the car is competitive to fight for the world title there is nothing to complain about,” added the 49-year-old, veteran of 106 Grand Prix starts.