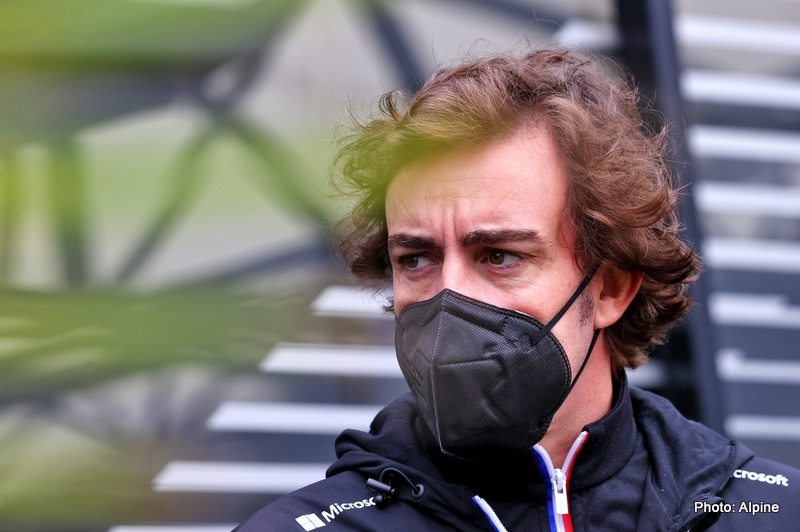 Alpine driver Fernando Alonso said that he will soon reach “100%” as the Spaniard looked ahead to race three of his comeback to Formula 1 following a two-year absence.

The two-time F1 world champion has scored just one point so far since starting his third spell in Enstone, with his 10th-place finish in Imola only coming after Kimi Raikkonen was handed a post-race time penalty.

Alonso though was very impressive at the season-opener in Bahrain where he qualified in the top 10, only for a sandwich wrapper to force him to retire.

Looking ahead to the first Portuguese Grand Prix of his career, Alonso insisted that he just needed a little more time to get up to speed, adding that changing categories was “never a problem” for him in the past.

“I don’t know where I am currently in terms of percentage,” he said. “As I said before the season started, it will take a few races.

“It is the same for the people that changed teams as well for this year because there are things that every team is different in terms of steering wheel feedback, pedal feedback, the way the car responds to different things, kerb riding, braking performance, tyre degradation – they are things that you discover with races and with experience.

“That is something that is not different to me, it is even bigger for me because it’s not that I changed team, I changed sport, basically. It will take time. It is not an excuse. I just need to work harder and prepare the things better into the weekend. I changed teams and I changed categories many times in my career and it was never a problem.

Two races in and Alpine have only picked up three championship points, leaving them seventh in the constructors’ championship.

Asked about the team’s performance levels so far, Alonso admitted they had “no margin”.

“I guess it is a difficult question that everyone tries to answer right now,” he added.

“I think the performance of the car is not in the place where we wanted to be. Fighting for Q3, we have no margin at the moment. There is a very tight group in the midfield, as we knew two or three tenths can make you finish in seventh or eighth, or 14th, 15th.

“We are in that group. We have no margin at all so if everything goes well in the weekend we can fight on the higher part of that group. If something goes wrong on that weekend you fall back quite easily. It’s the way I think it’s going to be for the whole season.”