Horner: We’ll put as much pressure as we can on Lewis 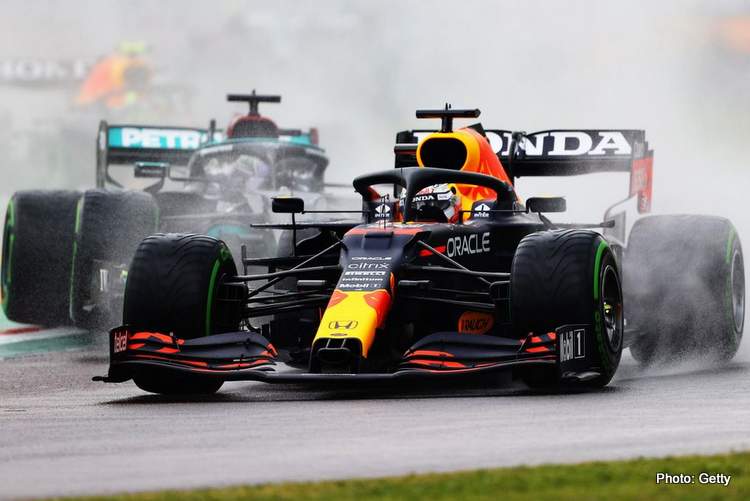 Red Bull believe that with Max Verstappen joined by Sergio Perez in Blue, they are best poised than ever before to take the fight to Lewis Hamilton who team boss Christian Horner has as their prime target.

It is well documented how Verstappen so majestically on a frenzied day at Imola, how Hamilton made a howler of an error before recovering to finish second. Did the pressure tell on the reigning F1 World Champion?

Horner believes so and is adamant that the Mercedes number one driver will face all the firepower the Bulls can muster, to force the kind of mistake we witnessed two Sundays ago: “We will try and put as much pressure on Lewis in his title defence as we possibly can.

“He made a fundamental error when he went off which is easy to do in those conditions but after Max’s victory, he still leads the championship thanks to the single point he won for setting the fastest lap in the race.

“So, if the next 21 races are as exciting as the first two, then it is going to be an epic season,” predicted Horner.

While an F1 budget cap is now in place, behind the scenes the repercussions have been absorbed by the energy drinks outfit as he explained: “This season, F1 has introduced a budget cap and it is up to the teams to work within those restrictions, which is not an easy task for the bigger teams.

“We went through a restructure over the winter, which was very tough and saw us having to downsize across certain departments. We made the difficult decision to take the pain early on so everyone knew where they stood.

“I understand other teams have elected to take a different approach and are now completing that challenging process. The budget cap is a big factor when it comes to performance, so a big crash like the one Valtteri had in Imola could hamper your ability to develop the current car as Toto [Wolff] said.

“But with the circuits, we have coming up, including street circuits with close barriers, accidents will happen to everyone and we will all have to deal with the same challenge at some point,” predicted Horner.

With regards to the forthcoming double-header, he said: “We are now going into a double-header as the races come thick and fast. We go to Portugal and then Spain and they are both great tracks but circuits we would expect to play to Mercedes’ strengths, based on last year’s data.

“Portimao was a good addition to the calendar last year, the surface will hopefully have weathered in a little bit like the newly resurfaced circuit was very slippery. Barcelona is the benchmark we all have so much data from so it will be interesting to see who comes out on top.

“I am excited for both races and you can be sure that we are full of energy and motivation. If we can put Mercedes under a little bit of pressure at these tracks then that bodes well for the rest of the year. I always said it would take four races to get a clear picture of form, so now is the acid test,” concluded the Red Bull boss.