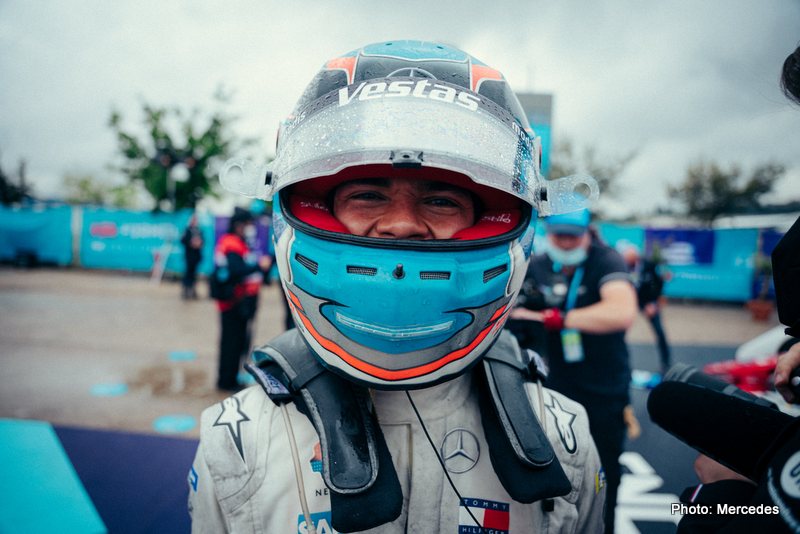 With multiple safety cars called out on a wet Saturday in Spain, only a small number of drivers had more than 1% energy remaining heading into the final lap.

De Vries crossed the line first after Da Costa fell back, with Dragon Penske racer Nico Muller second and Mercedes’ Stoffel Vandoorne third, despite the former McLaren driver having started at the back.

Only 12 drivers finished the race, with Da Costa a minute behind in seventh at the chequered flag. The reigning champion is also under investigation for energy overuse, alongside Robin Frijns, Sam Bird and Alex Lynn.

The finish… but not the finish. This is why energy management is perhaps THE most important aspect of Formula E#DHLValenciaEPrix @DHL_Motorsports pic.twitter.com/nDeYQvK08H

On pole thanks to fastest qualifier Vandoorne picking up a penalty for a tyre mix up, Da Costa made a strong get away from the front of the rolling start in the tricky wet conditions and quickly pulled a gap to the rest of the field.

An early collision between Andre Lotterer and Sebastien Buemi brought out the safety car and forced the Swiss driver to retire from the race, with Lotterer handed a drive through penalty as a result.

Following the restart, De Vries was able to jump up into second passing Max Guenther and Lynn in the process, with Oliver Rowland and Alexander Sims, who made up numerous places early on, fifth and sixth.

Guenther was particularly struggling for pace and fell back further to sixth place when Rowland and Sims passed the German, before he beached his BMW i Andretti car in the gravel and prompted the third safety car of the afternoon.

Sims then got past Lynn and Rowland as they activated their second attack modes following the restart, before Sergio Sette Camara became the latest to driver to bring out the safety after colliding with Mitch Evans.

Da Costa retained the lead once again at the restart and managed to take attack mode while staying ahead of De Vries, with Rowland, Frijns and Nick Cassidy all passing Lynn further back.

However, green flag racing was short lived, with Lotterer and Edoardo Mortara making contact and both ending up in the gravel, resulting in a fifth safety car of the race.

At the final restart with less than a minute remaining, only a few drivers had enough energy remaining to finish the race, with Da Costa overtaken by a number of cars as he crossed the line to start the final lap.

De Vries held on to win, but Sims and Rowland failed to finish following strong drives. Cassidy ended the race in fourth, with Rene Rast fifth and Frijns sixth.

Formula E returns tomorrow for the second race of the Valencia E-Prix double-header.