Mercedes: This sort of car damage isn’t in the plan 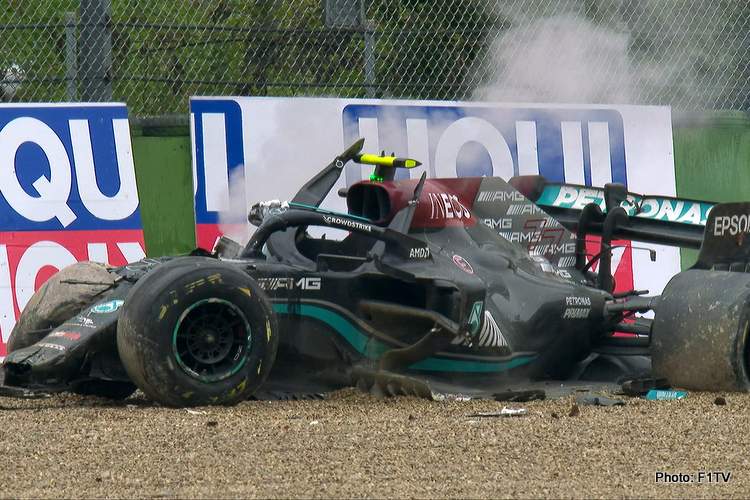 Mercedes trackside engineering director Andrew Shovlin has revealed that the team did not factor the sort of damage suffered to Valtteri Bottas‘ car at the Emilia Romagna Grand Prix into their budget.

Bottas was involved in a heavy collision with Williams driver George Russell at Imola, with both cars careering into the gravel after making direct contact.

The wreckage was such that the stewards brought out a red flag and the team have since admitted that some parts of the car were “damaged beyond repair”.

With the cost cap having been introduced ahead of the 2021 Formula 1 season, Shovlin explained that incidents of this nature were not “in the plan”.

“We are all cost capped, and this sort of damage isn’t in the plan,” he said. “Our drivers have been incredibly good getting through seasons without breaking much in recent years and certainly the bill in terms of carbon work and metal work will be very extensive from that.

“We will see what we can actually salvage and get the cars back together for Portimao, but it is quite a concern when you have these sorts of incidents.”

Speaking in a Mercedes post-race debrief, Shovlin added that the team were now inspecting what remained of Bottas’ W12 in order to find out what could be salvaged ahead of the Portuguese Grand Prix at Portimao next weekend.

“It was a big crash, we were seeing around 30g at points in his trip around the walls and the track,” he told the Mercedes Formula 1 team YouTube channel.

“Unfortunately, the car has not done quite so well. There is a fair amount of damage to that.

“We have managed to bring a lot of it back to the UK, we’ve got the power-unit at Brixworth where that’s being checked and inspected carefully and we will just pick through this and some of the bits we might be able to salvage.

“Unfortunately, quite a lot of it is damaged beyond repair and we are just looking at a logistics plan to try and be able to get sufficient parts to Portimao to make sure we can run both cars in the correct spec.”