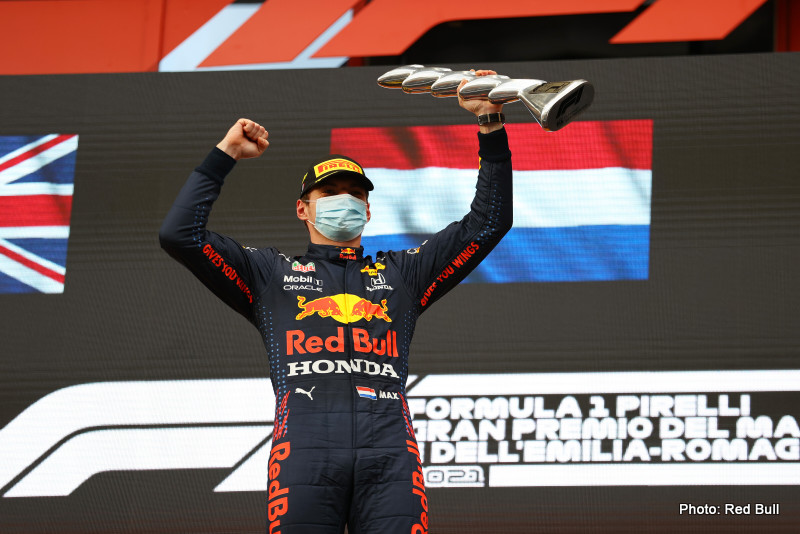 Let’s have a look.

Gold star. Max Verstappen launched better than both drivers ahead of him on the grid and forced the position from Lewis Hamilton into Turn 2 (we’ve all been calling it Turn 1). It’s important to note that Formula 1 continues to race with all wheels very much ‘open’, thus the will involved to bang wheels as Verstappen and Hamilton did with both drivers refusing to concede is indicative that the gloves are fully off. Verstappen went on to shutdown an overcut attempt by Mercedes despite an alarming closing rate by Hamilton several laps prior to the first stop. It was total perfection from Verstappen especially when juxtaposed with the quantity of mistakes that were made throughout the race by others. Any rating less than a perfect 10 is absolute nonsense in describing Verstappen’s race. Hamilton dominated in Portimao last year, Verstappen met the standard in Imola and it must be maintained moving forward. Hopefully Red Bull and Honda can keep up with the young and very fast Dutchman.

Alpine is off to its worst start to a F1 season since 2017 having only scored three points in the first two races to date. Alpine CEO Laurent Rossi recently suggesting that their 2022 car will be their best ever is of little benefit with regards to their current plight. Esteban Ocon and Fernando Alonso expressed a mostly positive review of their races, although the ninth and 10th-place results pale in comparison to a third-place shoey last year.

A matter of inches on Saturday resulted in Lando Norris losing a lap worthy of third position only +0.043 to Hamilton’s pole lap, and instead was regulated to a seventh place starting position for Sunday’s race. Lando went on to lose two more positions to Lance Stroll and Carlos Sainz falling back to ninth by the time lap one had ended which he put down to zero visibility. Norris would claw his way back and eventually set sail in a run to third position redeeming his Saturday error. Post race, Norris detailed how he’s shifted away from driving this year’s car the way he did last year, having recognised that the MCL35M needs to be handled different. The young British driver is in excellent form and also made the second best pass of the race, a double move on the straight in wet conditions.

Not only do Mercedes have their hands full with the recent advances of Verstappen and Red Bull Racing, but George Russell and Valtteri Bottas also found a way to cause the first obvious rift within the team since 2016. Heading into the Grand Prix and recollecting on 2016, Toto Wolff revealed that he would have no fear in making somebody miss races. He moved quickly to bring order in Imola as the difference of opinion between Russell and Bottas continued well beyond the crash. Russell is mostly criticised for his lack of patience and aggression in the incident, the same aggression that he is sensationalised for at the exact same time and likely the very reason we won’t ever see a Russell/Hamilton Mercedes pairing. He is Mr. Saturday after all, taking risks and forcing passes is standard operating procedure from where he sits, and one of his strongest attributes. Ultimately, his post-crash behaviour was disturbing as it was a very poor display of sportsmanship. Airing his grievance with Bottas immediately after the crash showed he’d momentarily forgotten the respect that should exist among rivals. If not for a long-standing relationship with Mercedes, the disrespect Russell paid Bottas while sitting in his destroyed W12 Mercedes challenger had every ingredient required for a career-ending moment, it was shameful on Russell’s part. Both drivers went on to take shots at each other in post-crash interviews with Wolff ultimately putting the cherry on top by jokingly suggesting that Russell was closer to a Renault Clio Cup ride rather than a Mercedes drive. The reality is, Russell has essentially been a Renault Clio Cup driver since arriving in F1 having long since outgrown his Williams F1 car. He’s been regulated to a poorly performing cars not by choice and it’s certainly not due to his performance level. He showed his abilities during the 2020 Sakhir Grand Prix, a race he dominated before a rare Mercedes pitstop error and subsequent puncture cost him a victory. He is basically a lion dressed as a lamb while in the Williams, the exact opposite of Bottas in the Mercedes. This incident will remain an open wound as the ultimate goal for Mercedes has always been to win the constructors standings which they currently lead by seven points. All parties must move past this event and push forward, but if Mercedes fail to win the constructors’ championship, this incident will come back to haunt all three involved. Bottas was averaging 3.5 seconds a lap slower than Hamilton, he was lapped after 23 laps of green flag running, and circulated the fastest car on the grid only 15th fastest of all drivers on track the lap prior to the crash. None of it looks good for Bottas when put into complete perspective.

Imola has been particularly unfavourable to Aston Martin two years running. Last year Racing Point failed to qualify for Q3, Stroll had his worst race of the season and the race ended with an argument over the radio with an agitated Sergio Perez highly critical of a late race pit stop. This year, Aston Martin arrived in Imola openly at odds with the FIA, with Otmar Szafnauer seeking a discussion on amending the current aero rules on the basis that low rake cars have been unfairly punished. Szafnauer would soon after state that he is “pretty satisfied” with the implementation of the new rules. Although that was not before having to put out a couple fires of his own on a less than satisfactory Sunday. Stroll was adequately quick during the race but a myriad of issues continues to hinder Aston Martin’s potential as reliability has been alarmingly poor since winter testing in Bahrain.

Carlos Sainz made a small error in Turn 7, Charles Leclerc spun his rear tires on the final restart costing him a position, but a combination of soft tyres on the McLaren, Mercedes power and DRS likely would have been enough to get Norris by Leclerc regardless. All things considered, Leclerc had supreme race pace, third best by my count, and Sainz was not far behind him. This is exactly where Ferrari need to be and stay as they head into the new regulations of 2022. A healthy and constant reminder of the intensity required by every department will bode well moving forward from the recovering Italian outfit. While Mercedes and Red Bull remain leaps and bounds ahead of the rest with respect to race pace, a good battle looks to be fully switched on between McLaren and Ferrari.

So many mistakes. Spectacular qualifying lap hushed the noise of an incident earlier in the weekend but by the time the race had ended, Perez could only apologise and state that he drove like an idiot. Christian Horner was quick to pick him up as while his pace wasn’t amazing, it wasn’t horrible either. The intensity is incredibly high and if good qualifying pace is a foreshadowing of what’s to come, Perez will get many more opportunities to execute and deliver a victory in the near future.

Why all the fuss? Helmet Marko took a shot at the Scuderia AlphaTauri driver after a seemingly miserable Emilia Romagna Grand Prix. Yuki Tsunoda was fined for speeding in pitlane during FP3, had a good and proper crash in qualifying, received a five second penalty for track limit infringements during the race and spun during the restart after the red flag, so what, and big deal. Tsunoda matched Pierre Gasly for race pace in Bahrain and went on to show significantly better race pace than Gasly at Imola. Tsunoda made up five positions starting last on the grid during the first lap of the Emilia Romagna Grand Prix, a YouTube clip that is well worth watching. He would restart 10th after the red flag one position behind Lewis Hamilton, and late braking to the inside of Turn 2 Tsunoda completed a pass for position on Hamilton before his devastating spin. The rookie Japanese driver either did things entirely wrong this weekend or exceptionally well with no in between. The visual of his wrongdoings outweigh what he did right but the promise of what he did right significantly outweighs what he did wrong, and if nothing more write this one off as a learning experience no different than what his fellow rivals have endured around him.

Easily Hamilton’s worst race since the 2019 German Grand Prix, a tough day at the office for the pole-sitting Mercedes driver. Hamilton found himself in the deep end after making an unforced error into Turn 7 which he took responsibility for claiming a lack of patience.

Hamilton would get an opportunity to regroup and eventually go on to deliver a second place finish plus one point for the fastest lap as now twice the beneficiary of sheer luck in Imola in as many years. “But we live and we learn, on to the next one,” he said afterwards, a great way to sum it all up a difficult day.