Leclerc: I thought about it but it was too late 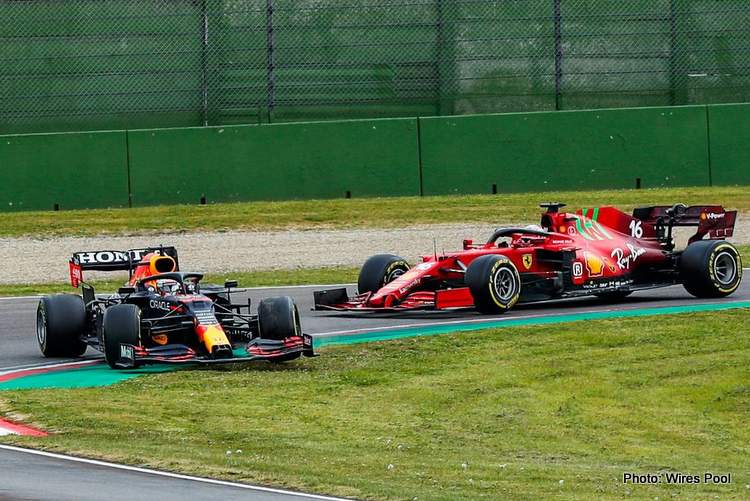 It was a very close shave for Max Verstappen before he powered to victory at the 2021 Emilia Romagna Grand Prix, the Red Bull getting dangerously sideways as the Dutchman swerved heat into his tyres, tempting Charles Leclerc to snatch the lead.

But the Ferrari held station as Verstappen settled the Red Bull before they were set off after the safety car period during a frantic and at times hectic race at Imola on Sunday.

A close shave for @Max33Verstappen at the restart 👀#ImolaGP 🇮🇹 #F1 pic.twitter.com/sf9U6enMsv

Reflecting on not stealing the lead, Leclerc told reporters afterwards: “I considered it at one point but at the same time I backed off, I think, looking back at it, it was the right choice because I think he always had one wheel on the track.

“I backed off because he didn’t completely spin. I thought about it but it was too late and he was already back in front,” he explained.

Verstappen gave his vesrion: “I was off-track for a bit, but once I was back on the track of course I was driving slow because I was recovering, getting my steering wheel straight. But then I don’t think you can pass anymore.

“I think when you see a car drifting like that in front of you, first of all I think you just back out, because you don’t know where it’s going to go,” added the Red Bull driver.

Also in the mix during that tense period behind the safety car was Driver of the Day Lando Norris, who had a front-row seat to the moment that might’ve changed the entire script: “I had a great view of it. Quite funny actually. I think Charles could have gone past him in my opinion.

“At that stage Max was out of control and going left and Charles kind of just hit the brakes and slowed down and stopped. At some point he has to go past Max because he was facing the barrier for a lot of the corner. I don’t know.

“We have to maybe ask the guys in charge what the exact ruling is for going off, as off-track, all four wheels off the track and example of yesterday but at the same time Max was going very slow.

“Charles could have driven past him at the point. I’m not sure. I think if I was in P2, I would have gone for it, because you have a chance at winning then. It’s a risk worth it,” said Norris, who went on to finish third.

Formula 1 race director Michael Masi gave his verdict: “After a [race] suspension, it is considered a race lap, but in the same sort of principles as a formation lap.

“So if a car was out of position, it would be like a formation lap that they can regain that position as long as it’s before [the Safety Car One line], is a general principle is the way the regulations are worded,” MNasi nsaid of the Verstappen-Leclerc incident.