Villeneuve: Bottas is just too slow 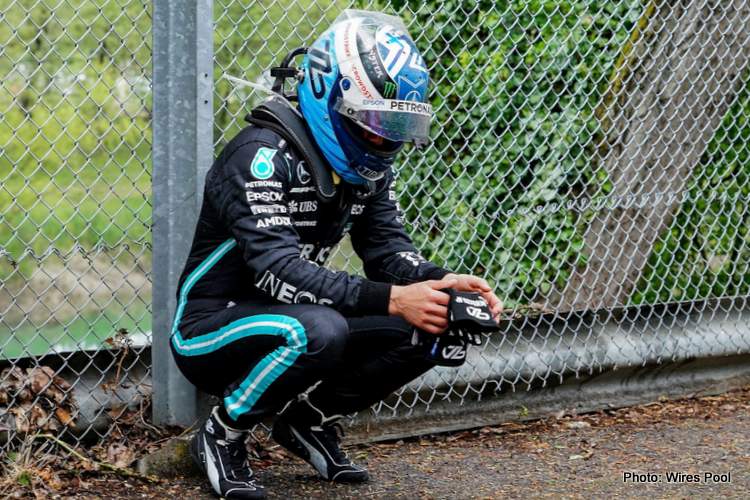 While most of the Formula 1 world castigated George Russell for colliding with Valtteri Bottas during the chaos fraught 2021 Emilia Romagna Grand Prix on Sunday, but Jacques Villeneuve does not understand why.

In the aftermath of the race at Imola, Bottas got the sympathy vote after Russell’s gutter antics immediately after the crash, followed by a verbal tantrum in its wake and the obviously forced apology that came a day later, after which he accused the Mercedes driver of “trying to kill us both” on Sunday.

Mercedes boss and mentor/manager to both drivers, Toto Wolff was not impressed with Russell, and it is sure the apology came from the big boss desk.

Villeneuve – who buys into Bottas feinting to the right rather than the driver simply following the dry line before he was clipped by the Williams with DRS wide open – questioned the Mercedes team principal’s reaction.

“That’s why I don’t quite understand Toto Wolff. Why does he blame the young Briton in the collision?” asked Villeneuve the 1997 F1 World Champion in an interview with F1-Insider.

“Bottas knew exactly that his potential successor was about to overtake him and risked a serious accident with his small move to the right. He’s not allowed to do that under these difficult track conditions.

“But that shows how tense Bottas is in the second race of the season. And it won’t get any better. Because he’s just too slow. If he wasn’t, he wouldn’t have had to defend his position so hard against a Williams.”

Harsh words from Villeneuve, who seldom minces them, but hard to argue, simply based on the weekend at Imola in which again he was way out Lewis Hamilton’s league starting with the pounding in qualifying.

With Red Bull firing on all cylinders these days, Max Verstappen was a shoo-in for pole until Hamilton decided to take it to another level, bring in his triple-A-game and take top spot on the grid (against all odds) with a stellar lap.

Bottas was nearly half a second slower than his teammate which was only good for eighth. It was a proper “humiliation job” on the day and hard to argue with Villeneuve’s reasoning.

In closing, while Bottas may have not sinned in the Russell collision, what has perhaps been lost in the spray of that day is the fact that one of the mighty Mercedes was battling for victory, while the other was being hunted down by a Williams which makes it hard to rubbish Villeneuve’s claim that Bottas is simply too slow.