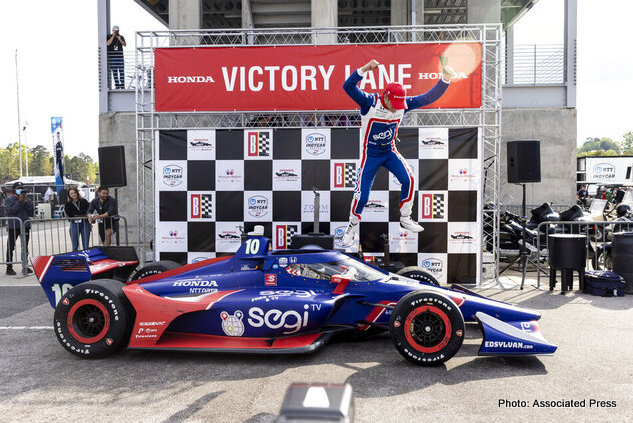 The past weekend saw the first IndyCar race of the season take place at Barber Motorsports Park with Spaniard Alex Palou taking a maiden win in the series.

Palou, racing for Chip Ganassi Racing in 2021 after a debut season with Dale Coyne Racing, managed to fend off champions Will Power and Scott Dixon. Palou became only the second Spaniard to win in the series; Oriol Servia being the first having won at Montreal in 2005.

Speaking after his win, Palou said: “It’s just amazing but I think it was part of the job. When you are part of a big team and a successful team like Chip Ganassi, they give you all the tools. You have everything you need to win, and that’s why you see so many successful drivers.”

The 24-year-old made a two-stop strategy work in his favour as he converted third on the grid into his first win. Polesitter Patricio O’Ward attempted a three-stop strategy and was only able to come home in fourth.

Fellow Ganassi driver Jimmie Johnson had a weekend to forget, only managing 19th place, three laps down on his teammates Palou and Dixon.

Despite the lacklustre performance, Johnson was pleased with the progress he has made since making the switch from NASCAR.

“Just a ton of learning experiences throughout the day,” Johnson said. “I just can’t say too many times how different this is and how specialized this craft is.”

Romain Grosjean meanwhile left Birmingham top of the rookie field with a tenth place finish in his first race back from his fireball crash at the Formula 1 Bahrain Grand Prix last November.

“First race in IndyCar, first top 10 so we can be very happy with that,” the Frenchman said.

“We fought at the front for some time and we did our best so a lot that we learned today.

“We can be very proud of our weekend. P7 in qualifying, P10 in the race. We’ve learned a lot and I guess we move on to St Pete and we try to do better.”

Josef Newgarden made an uncharacteristic mistake on the opening lap of the race, triggering a multi-car pileup. Colton Herta, Ryan Hunter-Reay and Felix Rosenqvist were also knocked out of contention.

“I got loose coming over the hill and then touched the grass. I think once I touched the grass I’m basically sideways,” said Newgarden, the two-time series champion who was runner-up last season. “I feel really bad for anyone who got involved in that. Obviously my mess created a bigger mess, so any of the cars that got involved I’m really sorry because it was us that tipped it off.”

In NASCAR, Alex Bowman denied Denny Hamlin a first win of the season as the #48 pounced with ten laps to go to win at Richmond.

Hamlin had dominated the opening stages of the race and with Bowman now the eighth winner in nine races this season. With competition more fierce than ever, Hamlin is growing increasingly desperate to get a win under his belt soon and guarantee a spot in the playoffs.

Speaking after his eighth top five in nine races, Hamlin said: “We just didn’t take off quite as good there at the end. I tried to warm it up and do everything that I could — just the 48 had a little more on those last few laps and I couldn’t hold the bottom.”

IndyCar race again this weekend at St. Petersburg, the usual season opener which has been shifted for the second season running due to the pandemic. The street circuit hosted the 2020 season finale.

NASCAR heads to Talladega for bumper-to-bumper action on the super speedway.