Inside Line: Russell went for wrong gap at a huge price 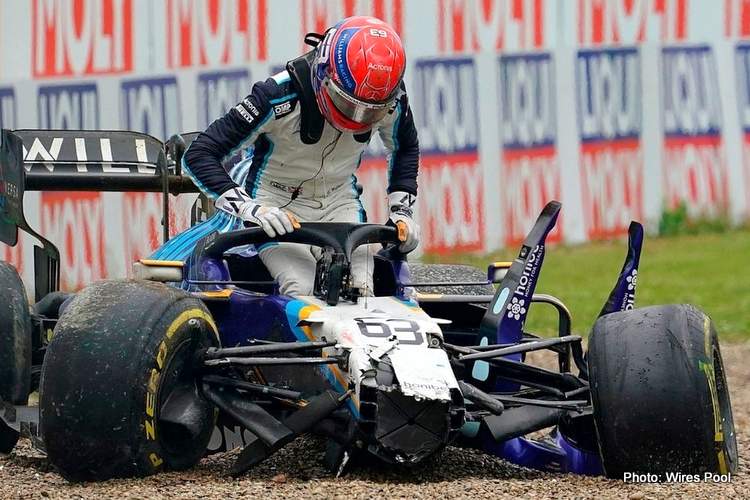 Ayrton Senna said it: “If you don’t go for the gap you are not a racing driver.” On Sunday during an enthralling Emilia Romagna Grand Prix George Russell went for one on Valtteri Bottas, miscalculated, crashed paying a mighty price and with it a great opportunity for him went begging.

Let’s be straight Russell sending it on the outside as they hurtled into Variante Tamburello was ballsy stuff, conditions did not favour that kind of bravery as we saw in the resultant mess.

As a racing driver, Russell was expected to go for the gap, imagine if the move had worked, had he made it stick; had the grass been 10cm further away he would have probably edged past but fate decided differently and the cars collided. With a little more luck and it might have been the best overtake of the past decade.

But now with the spray almost settled, the facts are: Bottas and Russell have a DNF besides their name for their efforts at Imola; both cars need some hefty and expensive reapirwork; Mercedes boss and mentor to both drivers is highly pissed off with the younger one who was subsequently been forced to apologise.

This is where the background to this episode of an ongoing saga takes importance.

After shining at Sakhir last year and his overall excellence in the back of the grid Williams, Russell is a prime candidate for a Mercedes seat. If Wolff’s team was not front of the grid material every weekend, the Englishman might have even been in the car this year.

But total dominance of the sport allows Mercedes – make that Wolff alone – to be the puppet master of a sport in which he wields far too much power, increasingly, therefore Bottas was retained as Lewis Hamilton’s wingman and Russell made to wait at least another year for a call-up to the best team in the sport.

A seat with Mercedes in 2022 seemed more likely than ever for the 23-year-old, one way or the other.

First, in the unlikely scenario that if Hamilton decides to call it quits then Russell would be the prime candidate for the seat. However, should the World Champion decide to stay the thinking is Bottas would get the axe at the end of the year.

In the aftermath of Imola on Sunday, that plan might be scuppered if not for another year maybe forever.

It must be very clear that Russell’s sin was not to crash with Bottas, he was racing, he made a mistake and paid the price. What is wholly unacceptable was his putrid actions afterwards.

From alighting his broken Williams, the charge to Bottas’s stricken car, the tirade directed at the Finn seated, stunned in his wrecked car and the slap on the helmet. Then to crown it, in a Vettel-esque style way of diffusing his error, he went on to accuse the Mercedes driver of trying to kill them both.

And then spewed, the “bullshit” as Wolff put it, about a drivers agreement not to jinx at an overtaking car, Bottas did nothing of the sort. It was all a smokescreen by Russell to disguise his blatant error.

That was ugly, nastiness and stupidity (yes stupid see below) few had seen in Russell before; a tantrum that may temper some of the adulation that has been directed at him. It was conduct unbecoming of a sportsman and in my opinion, deserves a one-race ban for that.

You can’t slap your opponents unless it’s a boxing match or a martial arts contest. Not even rugby or NFL.

Granted a day later, he did say “it was not my proudest day” and apologised to Bottas but it is clear he was forced to do so, and I am going to hazard a guess and say Toto blasted him and read him the riot act. Thus one has to ask if the apology is genuine? Or political?

Whatever the case Russell can reflect on how he blew a golden opportunity to be a superhero on the day but his stupidity got the better of him. Imagine this…

Around lap 30-ish, with Russell closing in on Bottas at a mean rate, why not go over the radio and say: “Hey Guys, tell Toto – I mean Mercedes – I am faster than Valtteri, what should I do? I will hang station until I get word but damn I am much quicker…”

Boom. Home-run straight into a window at Brackley. Ultimate humiliation. Bye-Bye Bottas. Maybe even with immediate effect, George to Merc and Val back to Williams for Portimao.

And if Williams were sharp or at least have the best interests of Russell at heart they might have got on the radio earlier and instructed their driver: “George great job. Hold station. You are faster than Valtteri, we gonna call up Toto – I mean Merc – and ask what to do. Meanwhile, hold station save your tyres etc.”

Now that would have sunk Bottas’s career on the spot! The Williams guy asking to get by the #77 while being lapped by teammate Lewis Hamilton would have been a hard one to justify.

But now Russell’s immature antics, bad sportsmanship and pure lack of respect on the day will haunt him which, coupled to the stupidity of firing up Wolff’s wrath, might have bought Bottas more time in the big team at Geroge’s expense.

In the wake of the latest Grand Prix at Imola, four decades since he uttered it, in this age of 280 characters, maybe now is time to rewrite that famous Senna-ism to suit modern F1, changing: “If you don’t go for the gap you are not a racing driver” to:
“Make sure there’s a gap before you go for it and, if you crash shut up and don’t piss off the guy that controls your future and F1 for that matter, namely your boss.”

Okay, it won’t make for a t-shirt blurb, but it may have been the difference between Russell being in a Mercedes next year or not.