Palmer: Hamilton and Verstappen will crash at some point 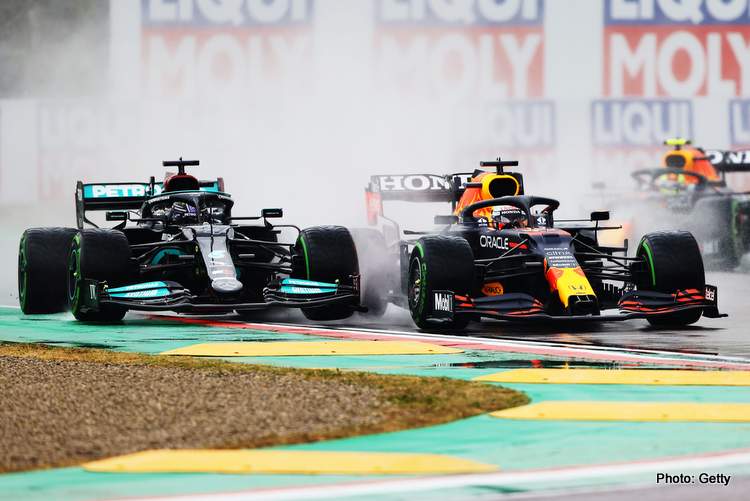 Jolyon Palmer has warned that the intensity of the 2021 Formula 1 World Championship battle, between the sport’s biggest stars – Lewis Hamilton and Max Verstappen – will lead to more incidents, even crashes between the two.

In retrospect, storming into Variante Tamburello at the start of the race on Sunday, with Verstappen edging ahead after storming off the grid from third-place, forcing pole position man Lewis Hamilton to tuck in behind the Red Bull, clattering over the kerbs.

It was very close and might have been very different had fate decided otherwise, it was nip and tuck. Damage limited to some broken wing-bits on the Merc and no puncture for the Red Bull. But it was razor-close.

Speaking on BBC’s Chequered Flag podcast, Palmer said of the Grand Prix at Imola: “This race if anything has absolutely shown us who will be fighting for the championship this year.

“When you’re fighting with your rival you can take more risks because if you get it wrong you’re probably going to take both out. You can get your elbows out a bit more, be more argy-bargy. It showed the aggression I’m looking forward to seeing over the next 21 races.”

The cliches have resounded ahead of this battle for months if not years: David v Goliath; Old Guard v Young Gun; the King and the Pretender to the throne; etcetera.

But the harsh stats are far more compelling and sum this contest up best: Hamilton hunting his eighth F1 world title while Verstappen targets his first.

“We hark back to the Rosberg days but they would rather crash with each other than finish behind each other. It’s the same now. That’s the fierce rivalry that’s already been born for this season,” added Palmer.

As for the first lap incident, the former F1 driver turned pundit observed: “Hamilton took a risk at the start of the race because he would rather neither of them finished the race, probably than finish second behind Verstappen.

“That was the thing with Rosberg and Hamilton – better to take chances in 50-50 moments and put your car in the position where you might have a crash if he turns in.

“You might risk a bit of contact here or there. When it’s your rival, you’ve got to do it and I think we’re going to see a crash between them at some point and I don’t know how we didn’t at Imola,” added Palmer.