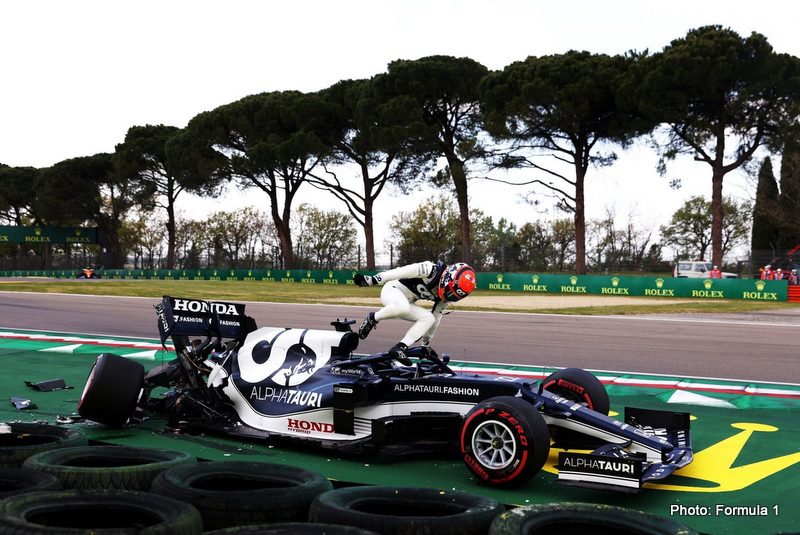 So there we are, all set for an exciting qualifying session for the Emilia Romagna Grand Prix, when promising Japanese driver Yuki Tsunoda gets it all wrong on his first flying lap and crashes heavily at the Variante Alta.

Once again, we are reminded that we are putting million-dollar race cars, perhaps the most sophisticated and technologically advanced in competition today, on race tracks with safety systems in large part salvaged from the local refuse yard.

It was clearly obvious from the video, shown from at least four angles, that the double row wall of used automotive tires, banded together and edged by a piece of rubber conveyer belt, did absolutely nothing to prevent major damage to the car.

All this primitive technology did was prevent the car from striking the wall behind the tires. The video clearly showed there was little if any compression of the tires which actually lifted up against the retaining wall before dropping down as soon as Tsunoda’s AlphaTauri bounced away from the tire wall.

The fortunate part of this event was that the conveyor belt-tire wall was there instead of a double row of Armco.

The Romain Grosjean crash in Bahrain proved that the Halo device and other recent FIA safety initiatives work well. Unfortunately, at the same time it proved conclusively that unprotected double row Armco has absolutely no place as a single, unprotected safety barrier that does nothing to prevent penetration by the pointy front end of an open-wheel race car.

And it’s not that this hasn’t been know for decades.

Promising Austrian driver Helmuth Koinigg was killed at the Watkins Glen F1 race in 1974 when his Surtees struck the double row of Armco at Turn 7. The bottom row buckled, but the upper row remained intact. Without the benefit of the Halo device, Grosjean would certainly have suffered the same injury which took Koinigg’s life.

It’s not as though some thought has not been put into creating arresting systems designed to absorb energy of a fast-moving vehicle.

The Steel and Foam Energy Reduction Barrier (SAFER Barrier), sometimes called a “soft wall”, is one solution intended to absorb and reduce kinetic energy during the impact of a high-speed crash.

The major importance of the SAFER barrier is that it consists of structural steel tubes welded together in a flush mounting. Behind these tubes are bundles of closed-cell polystyrene foam, placed between the barrier and an existing concrete retaining wall.

The SAFER barrier absorbs a portion of the kinetic energy which is dissipated along a longer portion of the wall. The impact energy to the car and driver are reduced, and the car is typically not propelled back into traffic on the racing surface.

The conveyor belt on the tire wall is there mostly to keep the car from knifing through the piles of tires, rendering the tire barrier virtually useless. If Armco is to continue to be used, it must be protected with material to prevent penetration below or between the rows of barriers.

Watch a video of aeroplanes landing on an aircraft carrier and you can see how absolutely effective a progressive speed reduction system can be. Even NHRA drag strips install a gravel pit with a huge safety net at the end of the strip. The gravel trap begins to slow a runaway drag racing car and the net does the final stop with minimal damage to the car and injury to the driver.

Clearly, arrester cable technology is not applicable to race tracks. Safety nets or “catch-fences” were actually tried many years ago but the technology was primitive and ineffective.

Even the multiple rows of catch-fence and wooden poles were woefully incapable of stopping a car since the small diameter wooden poles broke on impact or the fencing tore away from the poles.

A progressive, kinetic energy absorbing, speed reduction technology should certainly be possible. Each portion of a race track presents its own unique crash barrier solution requirements. Even the dumpster refuse tire walls could be repurposed.

Contact with the first row will begin to slow the car, the second and subsequent rows further reduce the speed before final contact with a retaining wall. The design feature of this progressive speed reduction is that the kinetic energy of the crash is not absorbed by the structure of the race car as was clearly evident in Tsunoda’s qualifying crash. After the crash, the rows which have compressed toward the final retaining wall can be pulled back to their original position by the ever-present tractors, thus “resetting” the speed reducing barrier.

This may work on some portions of the track but not all due to the space available and the physical geography of the track. Other, more sophisticated solutions would need to be developed possibly replacing the dumpster tires with energy-absorbing materials like the closed-cell polystyrene foam used in the SAFER barrier.

The goal must be the absorption of the kinetic energy and speed by the safety barrier before contact with a final retaining wall, thus minimizing damage to the car and potentially life-threatening injury to the driver.

There may be many possible solutions and it would be interesting to get input from outside the existing motorsports industry as to what materials and configurations could be developed to provide more effective safety barrier systems.