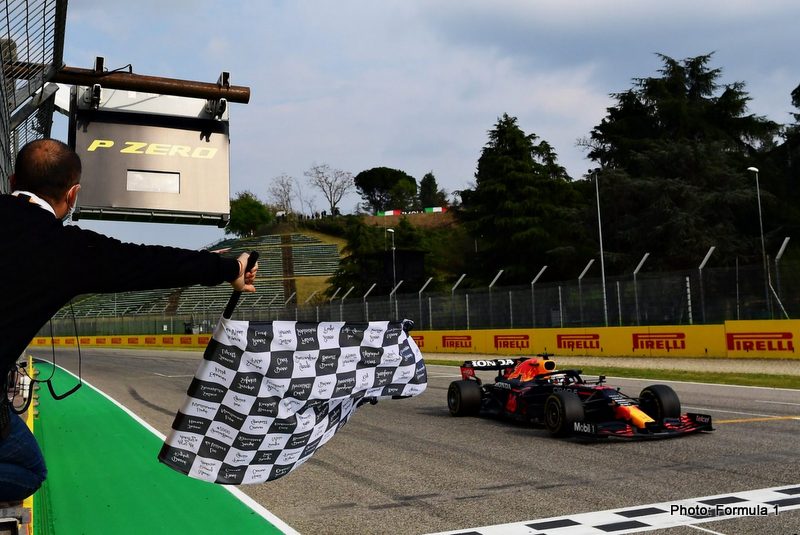 A supreme drive saw Max Verstappen triumph in the Emilia Romagna Grand Prix at Imola, the second instalment in a Formula 1 season that continues to deliver.

Let’s crunch the numbers and see what really went on.

Easily the most difficult assessment to make in F1 is the elusive oddity otherwise known as race pace. Nobody really knows what it is, it is liquid in nature comprising a vast array of convoluted variables and various items on the cars themselves requiring some form of management throughout the race.

It is impossible to conclusively put an exact number to race pace, especially with the conditions at Imola on Sunday. Over time I’ve come to believe that if you extract each drivers fastest lap every five laps, ignoring safety cars and virtual safety cars, and average that time, you’ll have a data set that best represents the true performance of each car. I call it “best case race pace”.

Below I have assembled “Best Case Race Pace” for the Emilia Romagna GP. Ignoring laps one to five and 31 to 35 due to the safety car, I have extracted the best lap of each driver for laps six to 10, 11 to 15 and so on, and then averaged the time into one single time. While the one single time really has no meaning, it’s the delta from time to time that best represents each drivers race pace lap time relationship. 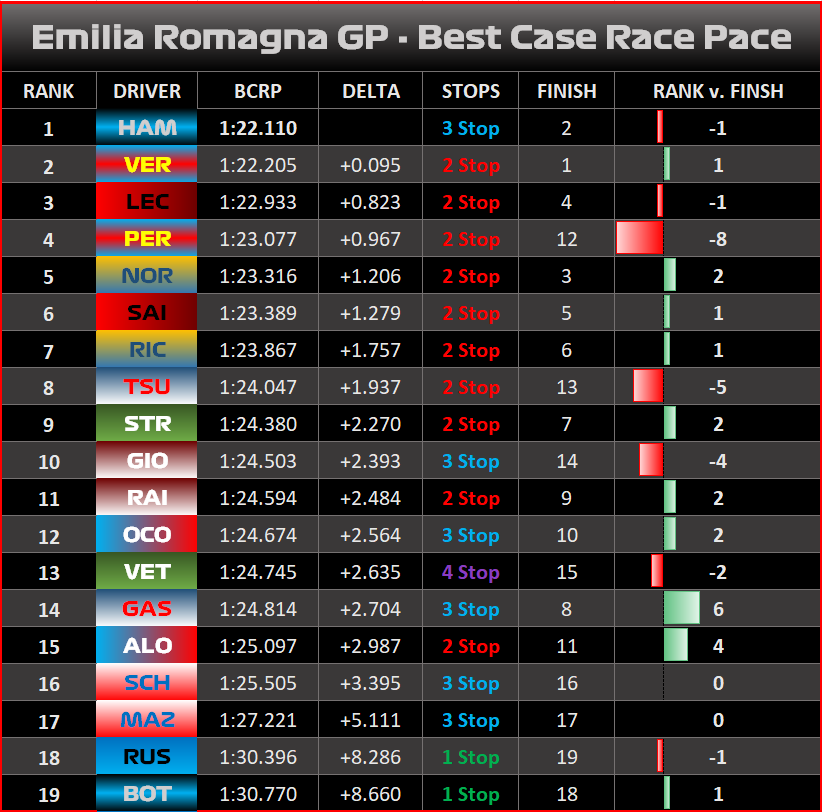 Per the Score Card posted below, Verstappen was the fastest car on the circuit 31 of the available 53 race laps, with Hamilton fastest 9 times. At first glance it would seem Verstappen dominated the race but the truth is Lewis Hamilton’s Mercedes challenger was the fastest car today by about a tenth per lap which is concerning for Red Bull moving forward. Verstappen capitalised on a good launch to out muscle Hamilton into Turn 1 using brute force to make Hamilton relinquish the position. It was a stunning display of aggression from the young Dutchman. 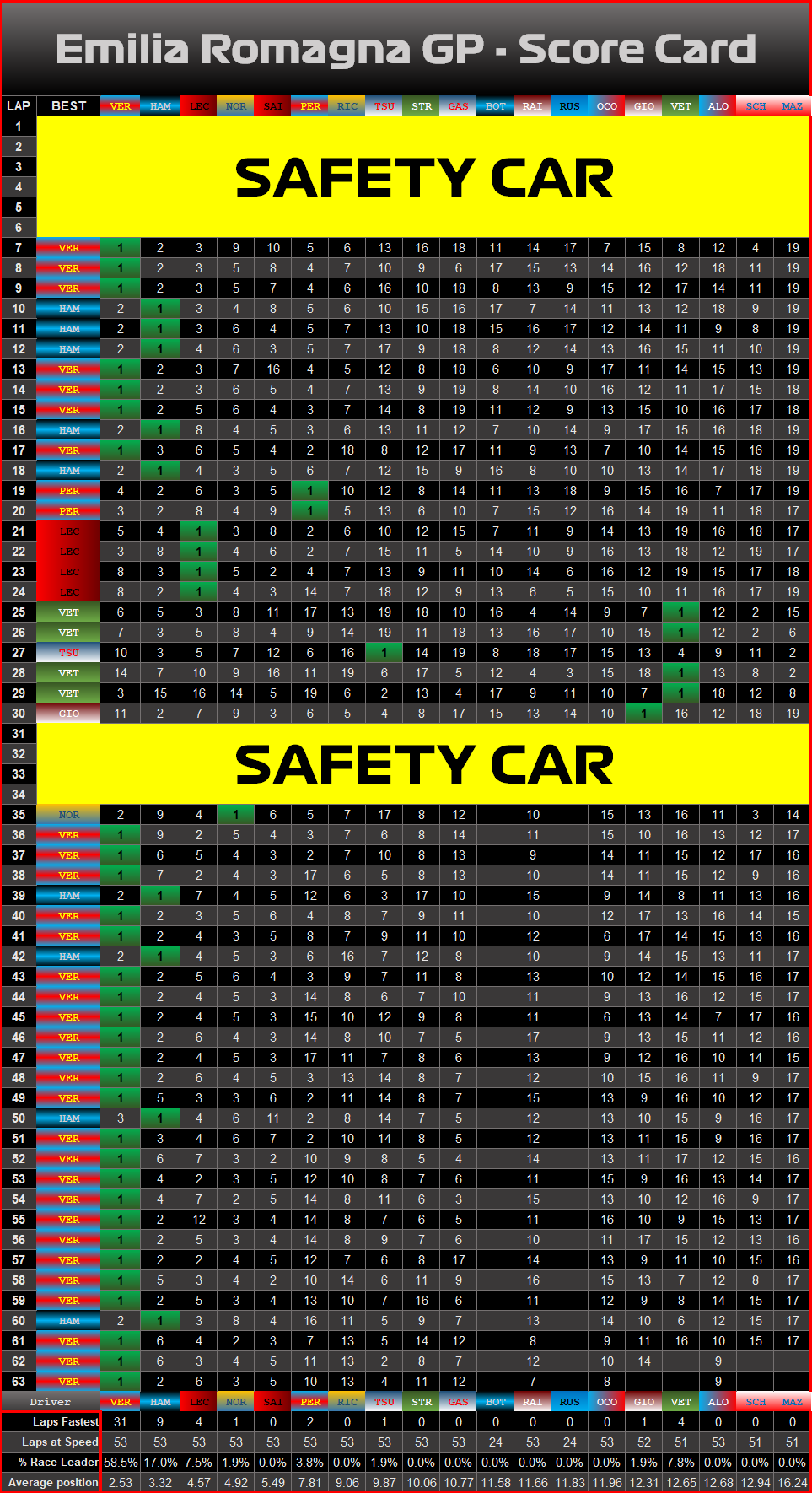 Hamilton would go on to make a season worth of errors as the bottom of his race collapsed beneath him. Mercedes went for an overcut at the first stop. That battle translates into an in-lap of Verstappen on lap 27 of 1:31.736 against Hamilton’s 1:30.425. Hamilton bettered Verstappen by 1.3 seconds in the attempt to overcut which was very clever of Mercedes. Ultimately the 1.3 second advantage was not going to be enough in a perfect world, losing time additionally with a slow right front tyre change was simply salt in the wounds.

Despite quickly closing the gap to Verstappen following the first stop on slick tires, Hamilton would go on to make his most pronounced self-inflicted driving error since the 2019 German Grand Prix. Comparatively, Verstappen had a clean race, although a near mistake during the restart after the red flag was immediately negated when Charles Leclerc directly behind Verstappen spun his tires and did not connect on his restart launch.

It is glaringly clear that any mistake is being amplified this year as the performance gap at the sharp end of the field reduces. Verstappen put a convincing performance together today, this level of performance must be maintained moving forward, and a wake up call for Hamilton and Mercedes. 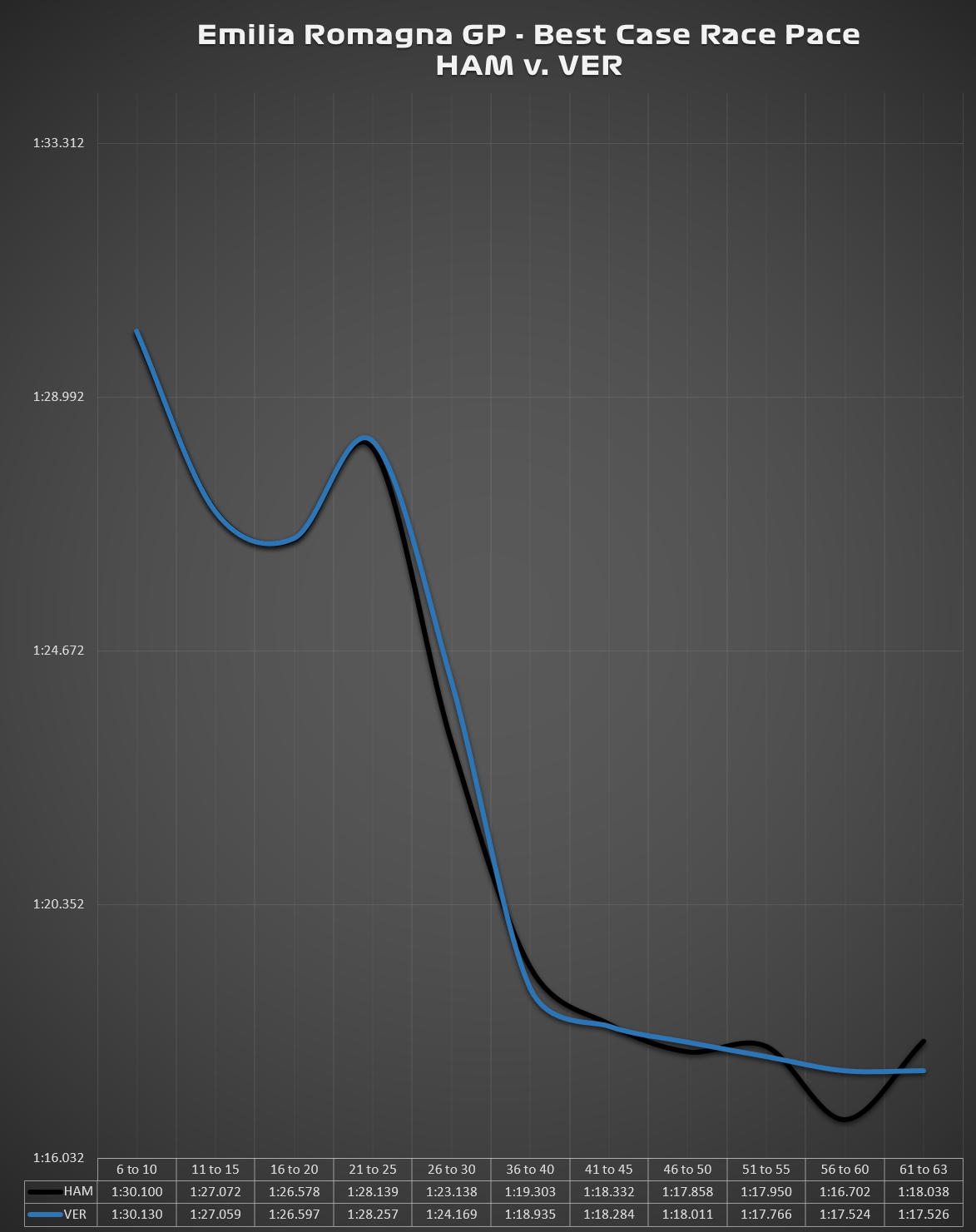 Leclerc had a sensational race, and while spinning his rear tyres may have contributed to losing a podium finish as Norris jumped him on the restart, there’s good news for Ferrari as they were the third best car today. Carlos Sainz nearly matched him on race pace which was a great recovery after yesterday’s Q2 exit.

Unfortunately McLaren’s Daniel Ricciardo had a tough day in comparison to his podium-finishing teammate Lando Norris. While a sixth place finish is an admirable achievement in the difficult conditions, Norris was faster than Ricciardo in 47 of the 50 comparable laps with an +0.500s/lap gap between the two. The McLaren package has certainly advanced this year, yet some additional effort is still required to get Ricciardo more at home in the car.

Like Ricciardo, Sergio Perez struggled in direct comparison to his teammate Verstappen. Despite many mistakes, Perez was fourth fastest today, but approximately 0.900s/lap slower in comparison to Verstappen. Red Bull Team Principal Christian Horner did state that Perez had good pace in clear air but it simply isn’t true. Verstappen was faster than Perez 43 laps of the available 50 comparable laps.

Valtteri Bottas put in his worst race performance since an equally inexcusable 2020 Turkish Grand Prix. Moving past the incident with George Russell, the weekend started initially with everything looking to be in his favour. Bottas managed to pace the weekend up until his Q3 implosion. Bottas was on average 3.5s a lap slower than Hamilton throughout the race, Hamilton was faster than Bottas 22 laps of the 22 available comparable laps, and worse yet Bottas had significantly less race pace than Russell in the Williams. He’s also rewarded his team with a completely destroyed challenger and his championship hopes appear to have dwindled. All things considered, it doesn’t matter who’s at fault for the crash.

Williams is being shown as N/A as not enough laps were completely to adequately determine where they compare amongst the teams. 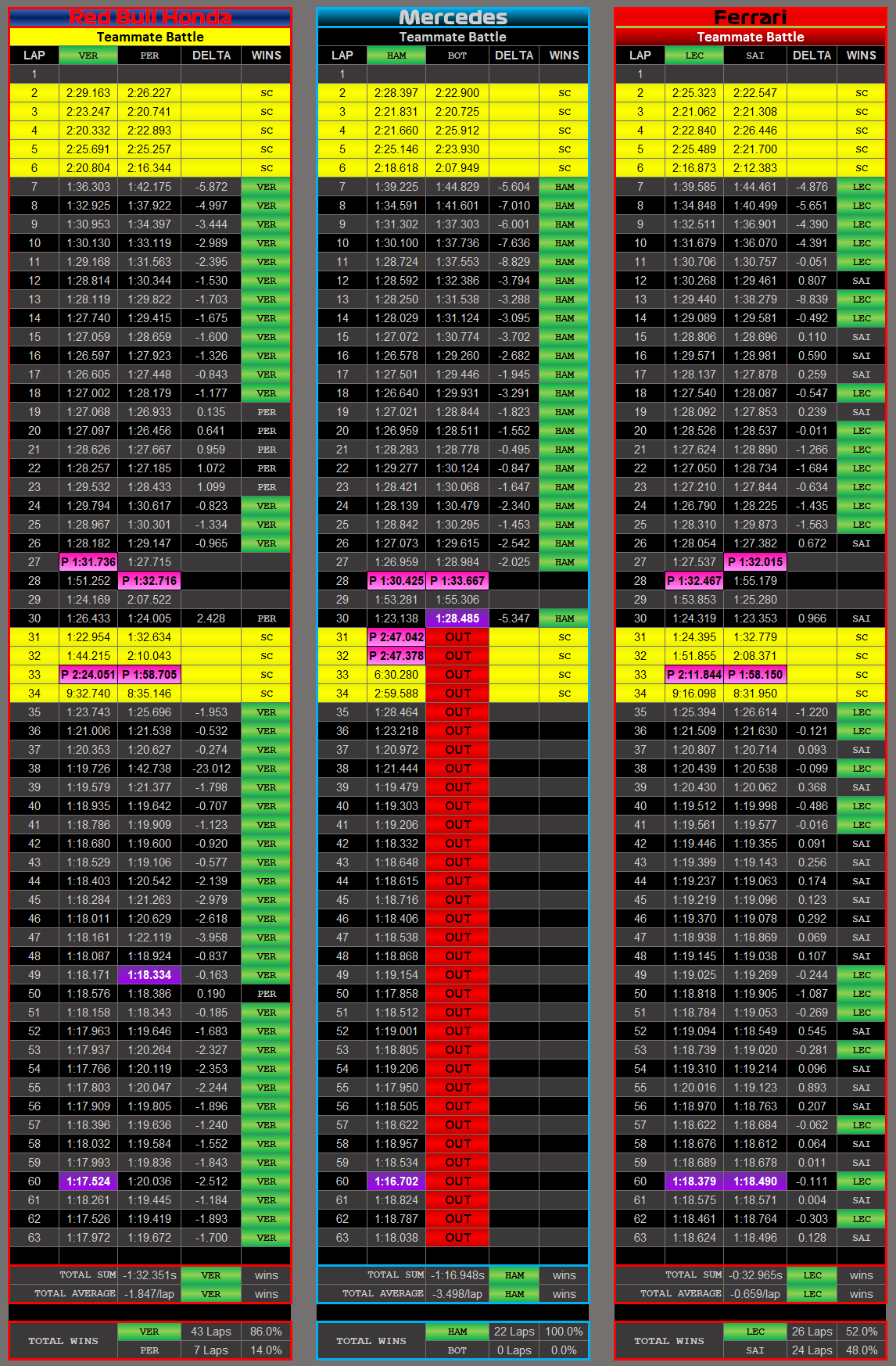 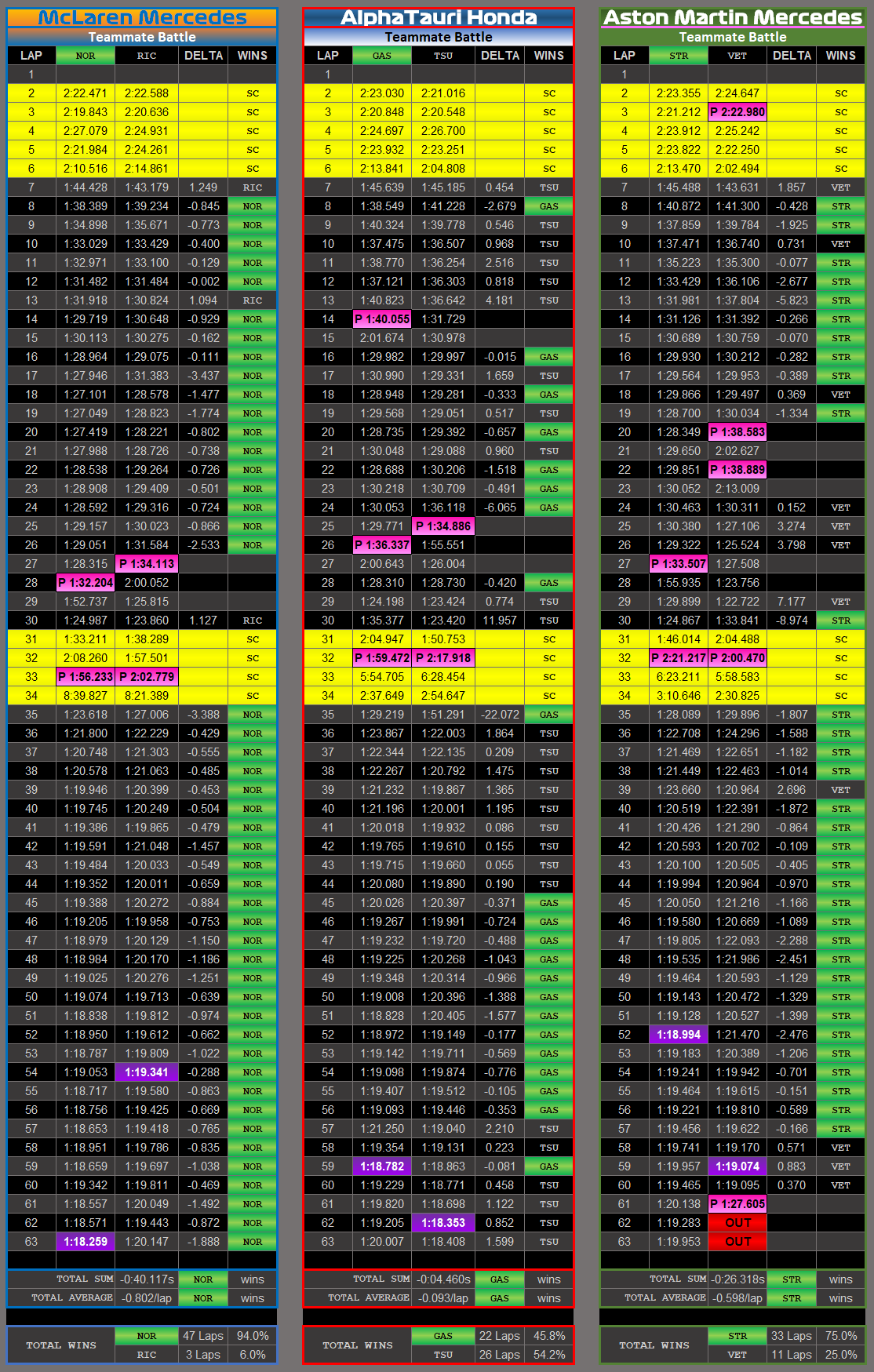 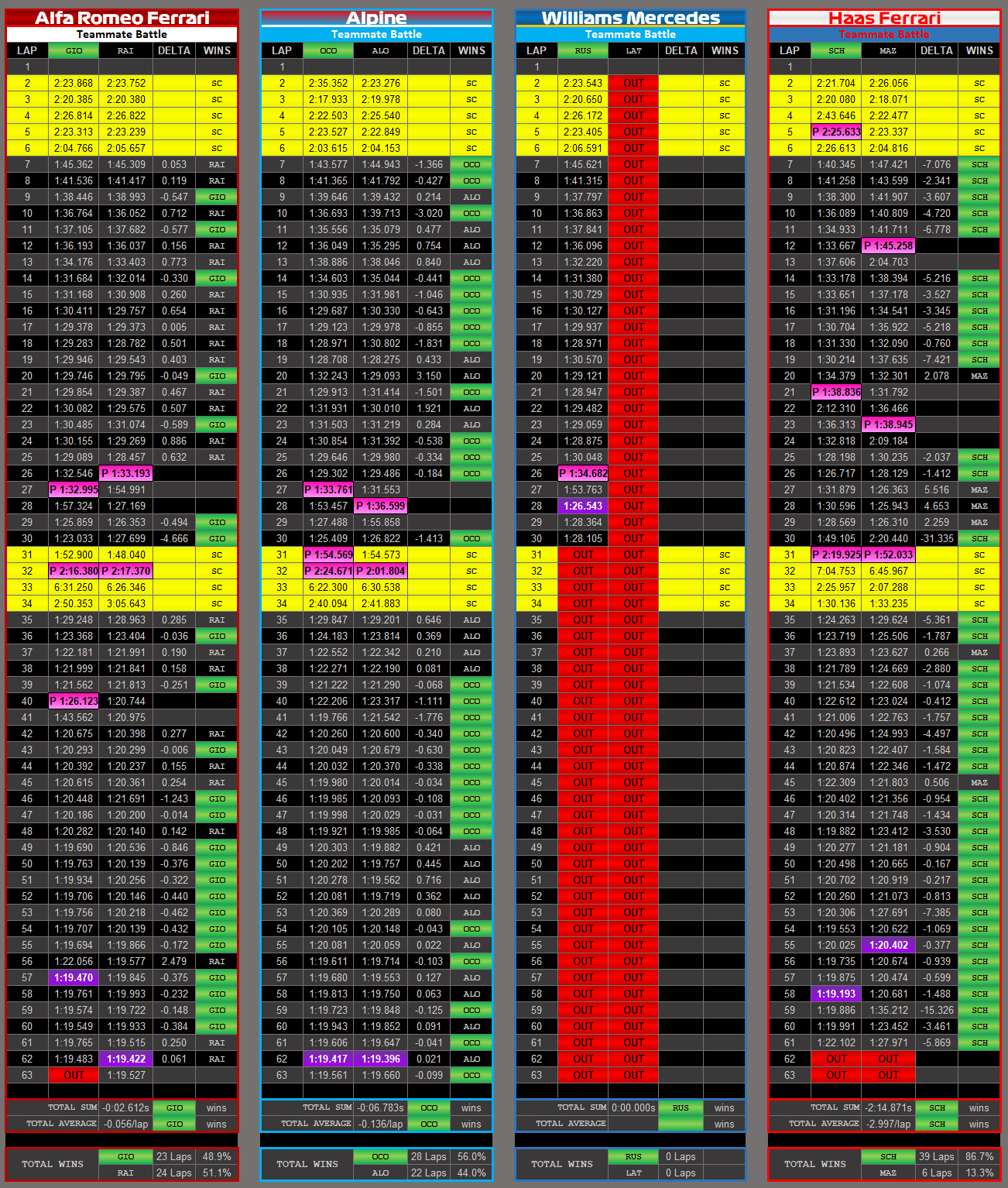