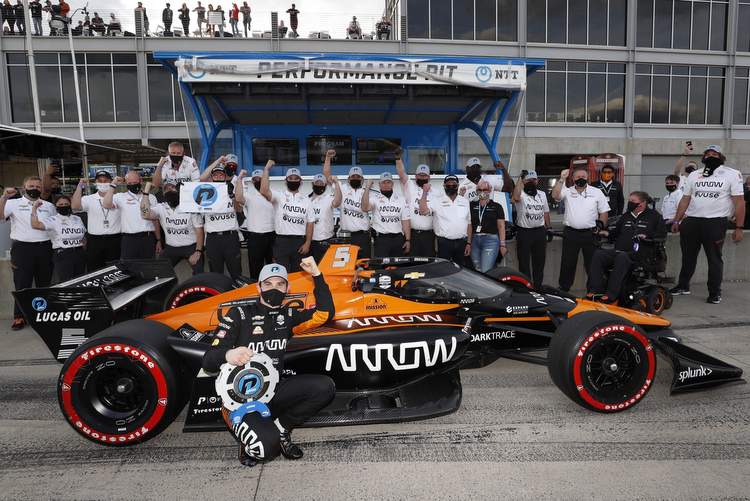 Pato O’Ward ran three blistering laps around Barber Motorsports Park to win the pole for IndyCar’s season-opening race and make good on his promise to become a headache that series veterans must deal with all year long.

O’Ward, in his second full season of IndyCar and the centerpiece of Arrow McLaren SP’s bid to become an IndyCar heavyweight, set a new track record in Saturday qualifying. It came in the second round and then he closed out the session with a pole-winning run of 1 minute, 5.8479 seconds to win the second pole of his career.

“I want to win races, I want to challenge for the championship the whole year and we want to be able to talk not just about myself but the whole team,” O’Ward said. “We’re just ready. We’re ready to go. I don’t feel like such an underdog.”

The 21-year-old Mexican will lead the field to green Sunday alongside Alexander Rossi of Andretti Autosport. O’Ward beat Rossi by 0.0698 seconds for the pole.

Romain Grosjean, the former Formula One driver racing for the first time since he suffered significant burns in a November crash in Bahrain, qualified seventh for his IndyCar debut. He’ll drive for Dale Coyne Racing in a partnership with Rick Ware, the NASCAR team owner who fields four noncompetitive Cup cars.

“What we’ve shown is very good. I think we can be super happy with that,” Grosjean said. “We’ve shown that the work we’ve done in testing worked well.”

Seven-time NASCAR champion Jimmie Johnson will start 21st out of 24 drivers in his IndyCar debut.

Johnson hopped on a scooter and navigated his way through an unfamiliar Alabama paddock. He stopped to lean against a stack of tires for a quick conversation with childhood hero Rick Mears, then went to work on his new career.

The seven-time NASCAR champion turned 22 laps in the first IndyCar practice of the season Saturday morning. He was slowest of the 24-car field but thrilled with the experience.

“Amazing. What a rush,” he said. “These cars are so physical, so demanding. It’s not two-or-three laps in and tongues hanging out panting, just wrestling this monster around the racetrack. Fun-meter is pegged, to say the least.”

Johnson will be a 45-year-old rookie when he takes the green flag Sunday at Barber, a picturesque permanent road course located roughly 40 minutes from Talladega Superspeedway, where Johnson won twice in his storied NASCAR career.

But he wanted a new challenge and he’ll get that in IndyCar. His goal for Saturday was not to qualify last and he succeeded by learning in every on-track session and besting Dalton Kellett in qualifying.

Johnson will also start ahead of Felix Rosenqvist, who was set to advance into the Fast Six with teammate O’Ward but had his qualifying time thrown out for causing a caution, and James Hinchcliffe, who crashed.

Sunday’s race is sold out with capacity capped at 20,000 000 attendees — a figure that includes spectators and distributed credentials to sponsors, vendors, race personnel and volunteers…. Takuma Sato won the race in 2019…. The race was not held in 2020 because of the pandemic.