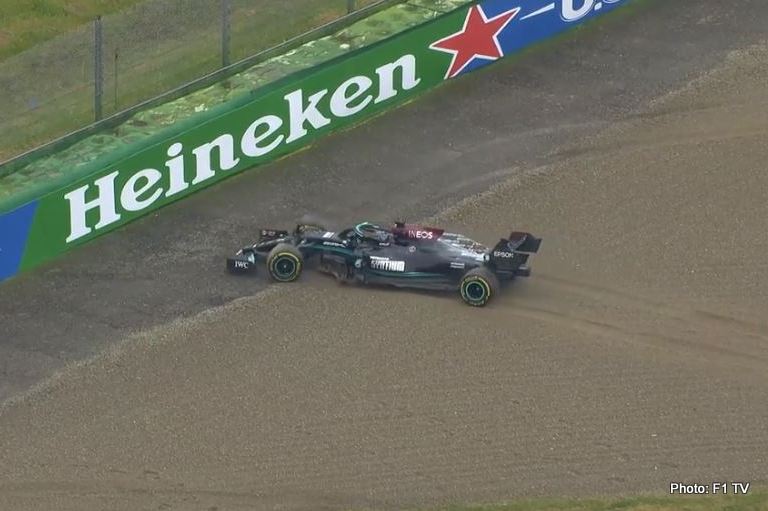 Lewis Hamilton has revealed that the reverse button on his Mercedes W12 “took forever to engage” while he was stuck in the gravel during the Emilia Romagna Grand Prix.

The seven-time Formula 1 world champion went off track while trying to chase down race leader Max Verstappen, with Hamilton initially struggling to recover from the gravel.

After a lengthy effort the 36-year-old was able to get back on track, albeit with a broken front wing, but had fallen back to ninth in the process.

Luckily for Hamilton, a red flag meant that his time loss was limited and with a repaired car and fresh tyres he was able to come back through the field to second.

Looking back on the incident, Hamilton said he felt “grateful” that he was able to keep going and rescue a strong result.

“Yeah, it just wouldn’t go into reverse so I was holding the reverse button and it took forever to engage,” he said. “I didn’t think it was going to work.

“I tried reversing and then tried to kind of do a burn out spin to get going again and I was back in the barrier so then it took a long time again to get back in reverse. And when I was reversing, I was like I’ve just got to keep going backwards and work my way out in reverse and if I hadn’t done that I would probably still have been there now so I’m grateful for it.”

Asked whether he thought he would be able to recover a finish on the podium, Hamilton said that he “didn’t know I would be here when I was facing that barrier”.

“I think just really grateful for the lesson,” he added.

“I didn’t get away the best at the start, it was very tricky conditions at the start. But we’re only human, so just that bit of a mistake was one to learn from. I’m just grateful I could get going again and get back into the race. It’s not how you fall; it’s how you get up. Really awesome to get back to second. I had a good battle with Lando towards the end. I definitely didn’t know I would be here when I was facing that barrier.”