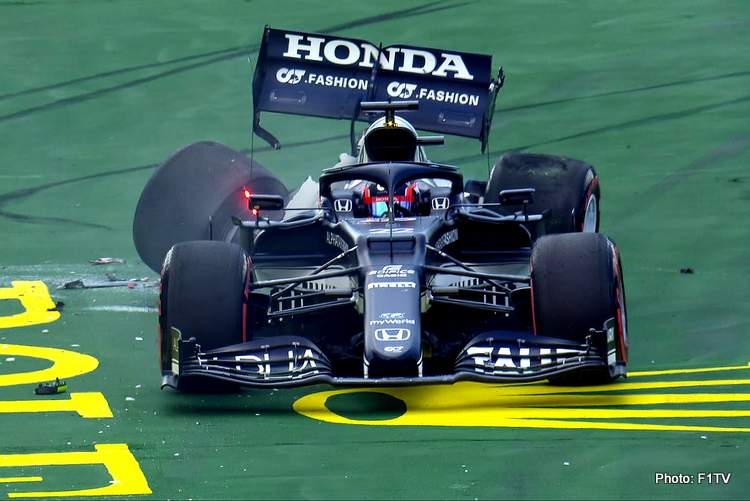 Three weeks ago a star was born when AlphaTauri rookie Yuki Tsunoda wowed everyone with a stunning debut in Bahrain but, on Saturday, he crashed down to earth when he shunted on his first lap in qualifying at Imola.

It was, as they say, a “rookie mistake” that severely damaged the AlphaTauri as the session got underway, and denied the Japanese youngster valuable experience in the form of qualifying track time.

Credit to the increasingly popular Japanese driver for taking the blame: “The crash today in qualifying was my mistake and I want to apologise to the team.  I was pushing too hard into the entry of the chicane and just couldn’t control the car after that.

“It’s a shame because up until that corner the car felt really good and it was a strong lap; I think we could’ve gotten through to Q2 on just one compound. I believe there’s the potential for rain at the start of tomorrow’s race, so anything can happen, and I’ll try to push as hard as I can to make my way forward from the back.

“The car looks really good, so I’ll just reset my mind tonight and jump back in the car tomorrow to go racing,” added Tsunoda.

The team’s technical director Jody Egginton added: “Yuki was unfortunate in his Q1 run. The lap was shaping up quite nicely, but he lost the car coming out of the chicane and hit the wall, sustaining some damage.

“These things happen to young drivers on their journey into F1 but he’ll bounce back from it, the most important thing is that he’s ok, and we’ll get the car fixed in time for the race.”

Tsunoda was highly regarded before he stepped up to F1, but his attitude and speed earned him a load of fans in the little time he has been in the top flight.

His minders at Red Bull, headed by Helmut Marko know what they have in the 20-year-old: “We have an incredible rough diamond in Yuki Tsunoda. We’re not going to burn him. We will look at the development and then make our decisions in a timely manner. We’ve had the first of 23 races, so let’s see how things develop.”