Marko: It was clearly Perez’s mistake 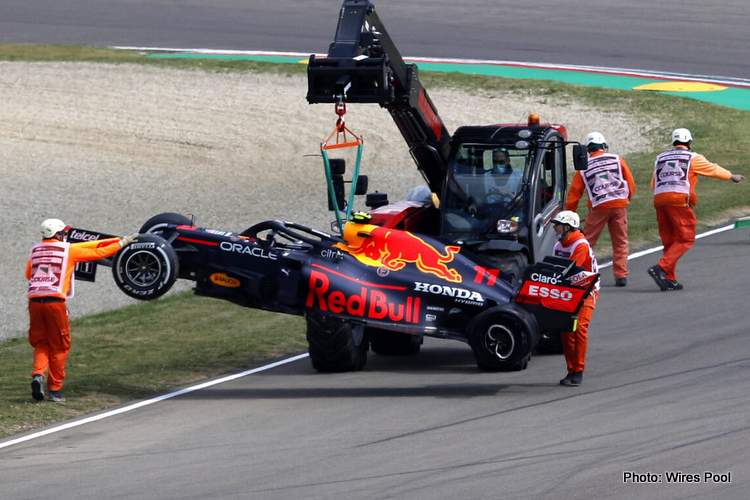 Sergio Perez got the blame for the mysterious collision with the Alpine of Esteban Ocon during practice for the 2021 Emilia Romagna Grand Prix, the Mexican’s boss Helmut Marko told media that their driver had erred.

It was a bizarre moment, not caught on TV as the signal on the day was intermittent, no onboards available and no footage meant the drivers were called to explain themselves. After which the FIA stewards deemed it an “unfortunate misunderstanding” and decided that no further action was required as neither driver was aggrieved.

During a spell of inexplicable comms failure during the course of the first day at Imola, drivers out on track had no communication with their pit wall which caused a certain degree of chaos and near misses, one of which was not the Perez-Ocon incident.

However, Marko told German-language media that Perez in fact was the culprit: “I don’t know what we have rear-view mirrors for. It was clearly Perez’s mistake, he did not see the fast-approaching Ocon and that triggered the incident.”

However, the two drivers involved describe the incident at Turn 5 differently. They concluded that, in fact, it was not Ocon who was on a fast lap but Perez, when the Frenchman would’ve made way for the speeding Red Bull but without a radio link, to their crew, no warnings came for either driver.

The misunderstanding led to contact into the corner, Perez’s left rear-wheel tagged Ocon’s right front and a little later, the Mexican spun in Turn 6 due to a broken wheel caused by the contact with the Alpine.

“You could see there were many incidents during the fast laps. I think [no radio] was a general problem,” explained Marko adding that fortunately, the damage caused to Perez’s RB16B is recoverable, “But of course he lost time. Above all, he didn’t go out with the soft tyre. It was a difficult situation.”

As for his thoughts on day one at Imola, Marko said: “You saw again that Mercedes and Red Bull are ahead.”