Imola FP3: Verstappen back on top with fastest lap so far 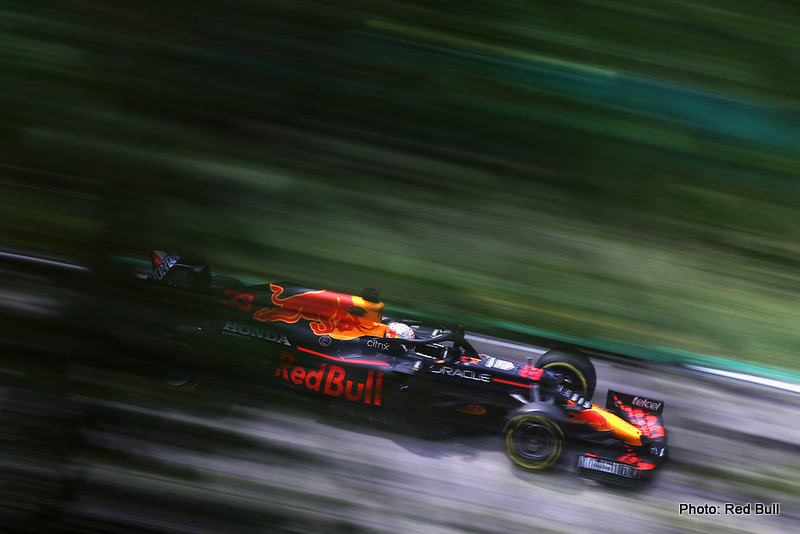 Max Verstappen bounced back from his drive shaft issues in FP2 to top the final practice session of the weekend at the Emilia Romagna Grand Prix.

The Dutchman was the first driver to dip below the 1 minute 15 second mark at Imola this year, and heads into qualifying looking for his second pole position of the season.

Lando Norris was second after a more impressive showing for McLaren, with Lewis Hamilton half a second back from Verstappen in third.

The track action was pretty sparse during the opening 20 minutes of the session, with the Ferrari of Charles Leclerc the early pacesetter with a 1.16.795 on the medium tyres.

Sergio Perez then went quickest for Red Bull on the yellow-walled tyre, before Nicholas Latifi brought out the red flag after going off track at Turn 6.

Thankfully, the Canadian managed to keep the engine running on his FW43B and made it back to the pits, limiting the delay.

When the action resumed the Mercedes drivers and Verstappen came out onto the track on the soft tyres, with Valtteri Bottas going to the top of the timing sheets while Hamilton and Verstappen saw their initial flying laps deleted for exceeding track limits.

The times began to come down with less than 20 minutes of the session remaining and Leclerc jumped back to the top with a 1.15.738 lap on the softs.

Hamilton set the fastest time of the weekend so far soon after, a 1.15.515, with Norris slotting into second for McLaren.

Norris went a tenth quicker a few minutes later with a 1.15.414, before Verstappen became the first driver of the weekend to go sub-1.15.

Antonio Giovinazzi brought out the yellow flags with the less than five minutes to go after going off track, but the Italian was able to recover his C41 from the gravel and prevent a longer stoppage.

Only Perez took advantage though, with the Mexican setting a 1.15.551 to go fourth fastest, behind only Verstappen, Norris and Hamilton.

Leclerc ended the session fifth, ahead of the ever-impressive Pierre Gasly in sixth and Carlos Sainz in seventh.

Bottas finished eighth, just ahead of the Alpine duo of Fernando Alonso and Esteban Ocon, who rounded out the top 10.

Yuki Tsunoda was 11th, ahead of the first Aston Martin in the hands of Lance Stroll, with Sebastian Vettel two places further back in 14th.

George Russell and Latifi were 15th and 17th respectively, while Mick Schumacher was a creditable 16th in the Haas.

Giovinazzi and Kimi Raikkonen with 18th and 19th, having both been off track during the session, while Nikita Mazepin was last. 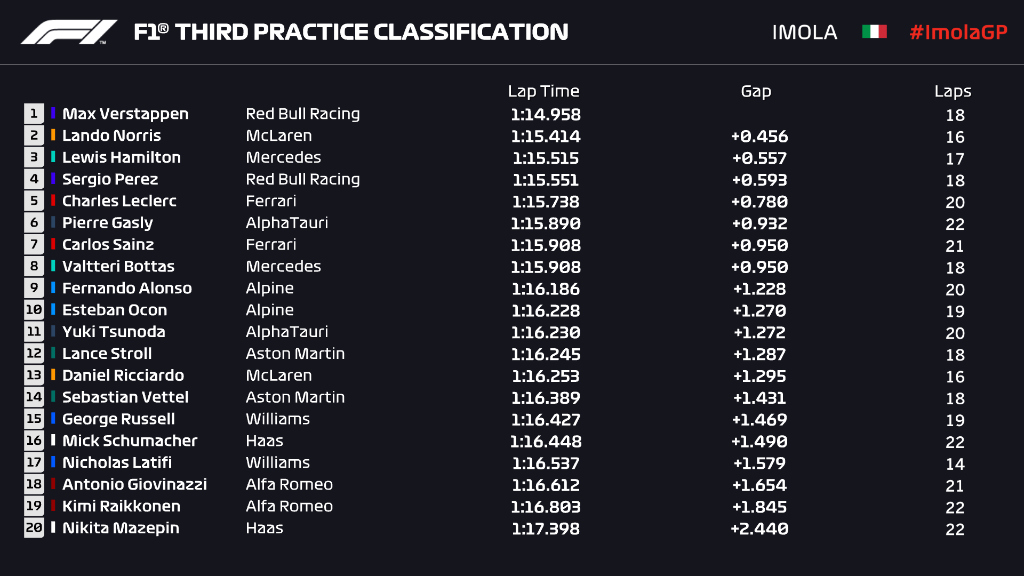