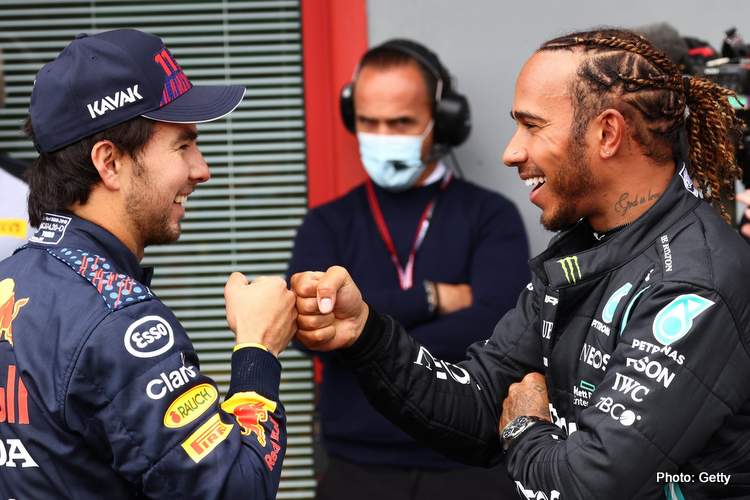 Lewis Hamilton claimed a remarkable 99th pole position by powering around the legendary Imola circuit fastest of all in qualifying for the 2021 Emilia Romagna Grand Prix.

The Mercedes driver was pushed hard by a fired-up Red Bull pairing, with Sergio Perez and Max Verstappen within a tenth of the benchmark time, setting a stage for the unusual duel of One Mercedes versus two Red Bulls.

Hamilton’s traditional wingman, pole winner here last November, Valtteri Bottas was down in eighth, 0.487 of a second shy of his teammate.

After setting yet another F1 record, Hamilton reported after Imola qualifying: “The day has been great. I definitely didn’t expect us to be ahead of two Red Bulls. They have been so quick this weekend. There were times when they were six tenths ahead, we didn’t really know where we would be.

“But the car has been feeling better from the beginning this weekend so respect to the team for the hard work to really narrow down the window. I love the challenge.”

Hamilton won the season opener, but only after the energy drinks outfit slipped up, and is relishing the contest: “I think it’s great finally we’ve got the two Red Bulls there.

“It’s definitely going to make strategy harder and it’ll be a real challenge because they have got great race pace. Their pace was a little bit stronger on the long run, but I’m just so happy.

“The first lap was really nice, really clean. There were some improvements on the second lap but it wasn’t quite as good as the first one, but I’m really grateful. I came around the last corner and heard that I got the pole and I was very grateful.

“I am just amazed at how close it is, and how exciting that is, because it really adds to the fire and the adrenalin rush. I didn’t know whether Max or Sergio had improved on that last lap for quite some time, so I was definitely nervous.

“But I knew going into qualifying it was going to take something special and the most perfect lap I could do, and a little bit more, in order to beat the Red Bulls because they have been so fast all weekend.

“I didn’t know if I could do it. But I started a tenth up out of turns one and two and I knew I was on to a good lap. Nobody within the team expected us to be on pole but that is what I was gunning for. I know that is the idea going into most weekends but we cannot afford any slip-ups and so far we have been firing on all cylinders.

“We are all operating at such a high level and there are milliseconds between us all. We could all go back and look at our data and say we could go faster, but it is what you do in that one moment that counts,” added Hamilton who will start his 268th Grand Prix on Sunday.

Mercedes trackside engineering director Andrew Shovlin said of Hamilton’s effort: “He certainly had to work hard for this one but drove really well through the session. It’s not been an easy day by any measure.

“We were struggling to get enough temperature for a single lap and if you start with the tyres on the cold side, the grip just isn’t there and you spend most of the lap sliding around,” he added.