Verstappen: Short FP2 not the end of the world 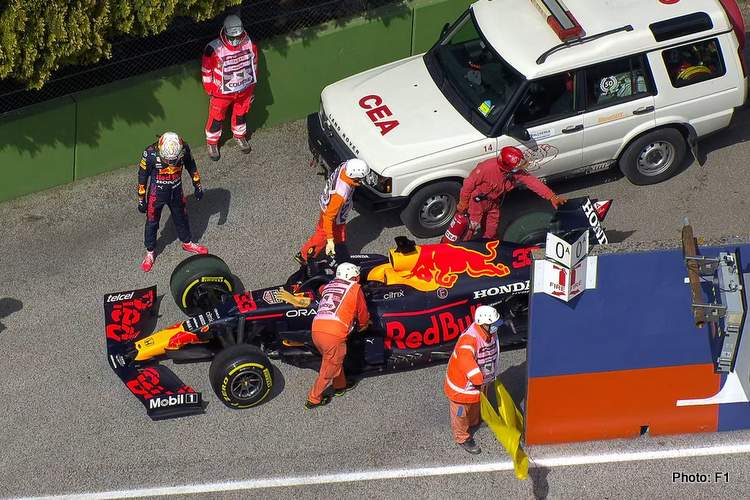 What a difference three weeks makes! After dominating free practice throughout the season-opener in Bahrain, Max Verstappen had a day he would rather forget on Friday at Imola.

The Red Bull driver played second fiddle to Mercedes in FP1 and, then, in FP2 a driveshaft problem rendered the RB16B to the garage with only five laps clocked. The team must have felt a sense of deja vu as the venue in Italy has not been a happy hunting ground for them, yet.

Last year a tyre failure scuppered Max’s chances and resulted in a DNF at the first Emilia Romagna Grand Prix. Same place, same story. Lady Luck is not on his side at Imola.

Verstappen said as much in the Red Bull team report: “I like Italy. The food is good and I enjoy being here but we don’t seem to have been that lucky with the driving here recently, so hopefully that will change.

“I had a driveshaft issue so we had to stop the car in FP2 and it wasn’t the easiest to get the car back to the pits so I couldn’t get back out on track.”

The good news is that it was nip and tuck at the front between Mercedes and Red Bull, although the Black cars were one-two in FP1, Verstappen was less than a tenth adrift.

He continued: “The car felt alright in FP1 and it is difficult to say how the second session would have been but we will still be able to look at the data and see what we can do better for tomorrow in terms of balance.

“Of course, it would have been better to have the session but I don’t think missing running in FP2 is the end of the world as we know what we need to do tomorrow. We just have to focus on ourselves and make sure we get the best out of our package.”

Team principal Christian Horner confirmed to media that it was the driveshaft that caused the issue. Report here>>>

But if anyone can fix a problem, it’s @redbullracing‘s mechanics and engineering team! 👊#ImolaGP 🇮🇹 #F1 pic.twitter.com/T6ANbAdW0P

Red Bull’s frustration was compounded on day one by Sergio Perez’s mysterious coming together with Esteban Ocon’s Alpine during FP1.

After the repairs, during the afternoon session, things got better for the Mexican who ended the day sixth fastest. A disappointing day all around for the Blues.

Perez saw the positives and said in the report: “It was definitely good to get a decent amount of laps in the second session today and to get a feel for the car on a different track.

“The track conditions are obviously very different here compared to Bahrain so I’m just learning how the car behaves on different tracks. We’ve learnt a lot today as a Team and for every lap I do, I learn a few tricks here and there.

“The race pace seems to be strong and the car felt good, hopefully, we can pull it all together in qualifying tomorrow.

“With the incident this morning, we didn’t have radio so I think there was a miscommunication through there and I think it was just bad timing,” added Perez of the incident that cut short his FP1 session by 20 minutes.

Here are all the highlights from FP1 🎬#ImolaGP 🇮🇹 #F1 pic.twitter.com/dOSNj3I7zE

Last year’s race is not a memorable one for the Bulls as, apart from Max’s DNF, Alex Albon was only good for 15th; his replacement (now at Red Bull) Perez was sixth on the day for Racing Point.

At the shape end, Mercedes cleaned up with Valtteri Bottas claiming pole by six tenths over next best non-Merc which happened to be Verstappen. On race day a tyre failure scuppered the Dutchman’s chances when battling the World Champions with Lewis Hamilton taking victory over his teammate.