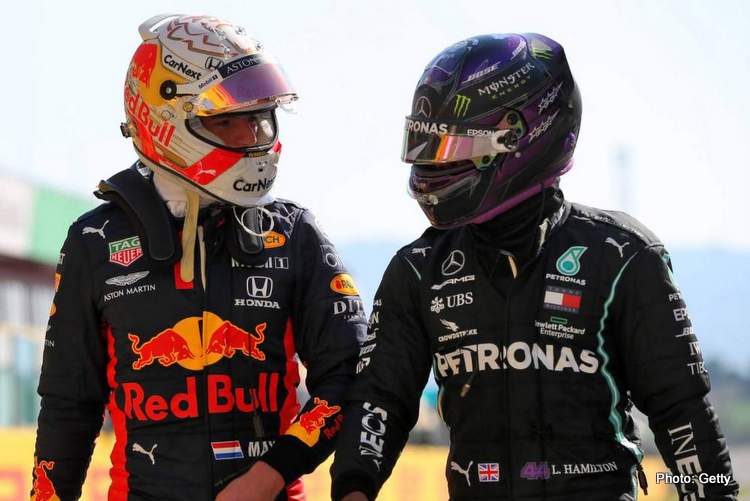 Sebastian Vettel has said that it was Lewis Hamilton’s racing IQ that helped him beat Max Verstappen to the Bahrain Grand Prix last month.

Speaking in front of the press ahead of this weekend’s Emilia Romagna Grand Prix at Imola, Vettel, sitting alongside Hamilton, praised the seven-time champion for winning the first race of the 2021 season.

Hamilton and Mercedes came out trumps in the strategic battle at Bahrain after the pitstops, holding off a charging Verstappen who ultimately had the faster car in the race.

The Dutchman overtook Hamilton for the lead but, in doing so, was deemed to have exceeded track limits and had to give the position back.

After a disappointing debut with Aston Martin, Vettel explained that he had watched the highlights after the race.

“I think Max was faster, he had better tyres at the end of the race, but Lewis was smarter and drove well and kept his head down and did what he had to do,” he said. “I think he had, in that regard, nothing to lose and everything to win and he came out and won so it speaks for him.”

Verstappen had controlled the weekend’s proceedings up until the latter stages of the race, sweeping the practice sessions and qualifying.

“Max I think had a chance, he was faster, should have won the race, didn’t win the race and Lewis won the race,” Vettel continued.

“So I think in that case it’s really Lewis that won the race.”

Heading into Bahrain, Hamilton and Mercedes had spoken openly on their perceived disadvantage to rivals Red Bull.

The fight at the front seems closer than ever, and this is something that the Briton says he will relish.

“I had a positive feeling, naturally with the result,” said Hamilton.

“It was a very difficult weekend for us. It’s clear that Red Bull have started off really, really well and with a great package and Max is driving really well.

“It’s set up for a good season ahead. Of course we don’t know what to expect moving forwards into these next races with different temperatures and different track surfaces but it’s going to be fun one way or another.”