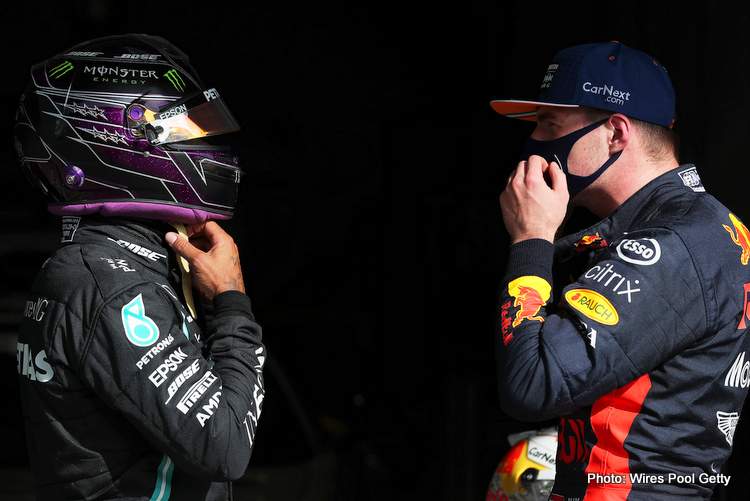 After the thriller in Bahrain three weeks ago, Formula One fans have been champing at the bit for some more action, and if the bookmakers are to be believed, another close battle between Lewis Hamilton and Max Verstappen beckons.

In 2020, Hamilton was a heavy odds-on favourite for every race, but that is no longer the case. Having edged out the Dutchman in the season’s curtain-raiser in dramatic fashion, the best price on a repeat for the champion is 6/4.

Meanwhile, the best odds you can get on a Verstappen triumph is 7/5, but many betting sites have the pair priced identically around the 5/4 mark.

Interestingly, Hamilton is a reasonably clear favourite in the Drivers Championship market at this stage. He had been trading at odds greater than Evens on the Betfair Exchange after Verstappen took pole in Bahrain, but with a seven-point lead and seven World Championships in his back pocket, the Brit is back to odds-on at 8/11 to break another Michael Schumacher record and secure his eighth crown.

Hamilton’s Mercedes teammate, Valtteri Bottas, will be hoping that his outing in Bahrain isn’t a sign of things to come this term. His third-place finish looks fine on paper, but in truth, he was way off the pace in the end.

Not for the first time, Bottas wasn’t too happy with the ‘passive’ strategy from Mercedes – in addition to the slow second pit-stop.

Luck was not on Bottas’ side on multiple occasions last year, and while he hasn’t got off to the start he wanted in 2021, he can be backed at 9/1 to turn his fortunes around at the Emilia Romagna Grand Prix.

The Finn had to settle for second in Imola in 2020 despite taking pole position. He is 9/1 to take pole here, with Verstappen the favourite at 10/11 and Hamilton next at 11/8.

While Sergio Perez’s fifth-place finish on debut for Red Bull might not look like much, it was in fact a tremendous effort to recover having started the race from the pit lane due to a power issue on the formation lap.

The Mexican scooped Driver of the Day honours, and he has been given more respect in the betting market than what we were previously seeing for the man he replaced at Red Bull, Alexander Albon.

Perez is 11/1 to win on Sunday, and 6/4 to finish on the podium. With Hamilton and Verstappen perhaps fighting for top spot most weeks, there could be a similar tussle between Bottas and Perez behind.

Mercedes remain strong favourites for the Constructors Championship, though, at 4/11 as opposed to the 2/1 price on Red Bull.

Outside of the top two teams, there are four drivers that are odds-on to finish in the top six this weekend. Lando Norris, Pierre Gasly, and Daniel Ricciardo are all at 8/11, and Charles Leclerc is just a touch bigger at 4/5.

That is four drivers from four different teams, all of whom look competitive. Also impressive on debut was AlphaTauri-Honda’s Yuki Tsunoda, who is 2/1 for a top-six spot and 4/7 to score points.

Aston Martin will want to get in that mix, but neither Lance Stroll (6/1) or Sebastian Vettel (10/1) are fancied to break the top six in Imola.