Bottas: We are now the hunters, not the hunted 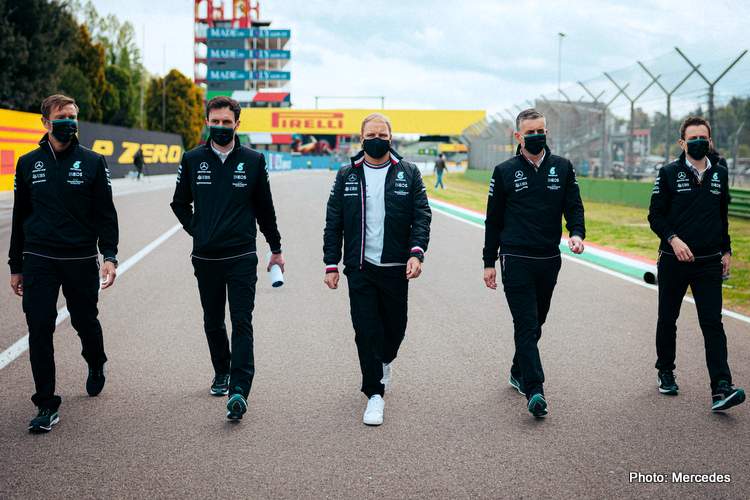 Formula 1 World Champions Mercedes are hunting rather than being hunted now that Red Bull have found the sweetspot in their car so early into the season, according to Valtteri Bottas.

Red Bull and Verstappen are expected to be strong again at Italy’s Autodromo Internazionale Enzo e Dino Ferrari, Imola circuit on Sunday for the second round of the season.

“Already in testing we saw that we were on the back foot against Red Bull and the first race confirmed that we’re behind,” Bottas told reporters ahead of the Emilia Romagna Grand Prix.

“I don´t feel exactly much pressure, but I feel excitement and motivation. We are now the hunters, not the ones to be hunted,” he added.

“We try to take all the positives from that…I can definitely see the motivation in each team member´s eyes to try and get [Red Bull] and work as well as we can together to again achieve the goals we have for this year.”

Bottas took pole position for last year’s race at Imola but Hamilton won, with Verstappen retiring due to a tyre failure while in second place.

Mercedes have won every championship for the past seven seasons and Hamilton is going for a record eighth title.

Bottas said he still believed Mercedes could unlock more performance and catch Red Bull, with 22 races to come, but dominating would be more difficult.

“We’ve only seen the car from one track and we’ve seen quite big swings in performance from track to track,” he added. “You never know, but I can’t see anyone really dominating.”

The Finn said he had been at the Brackley factory after Bahrain to work in the simulator and help the team. (Reporting by Alan Baldwin)